This time, UFC welterweight champion Georges St-Pierre faces right knee reconstruction surgery and a layoff of probably around 10 months after what he called a freak injury in training.

The 30-year-old mixed martial arts star from Montreal has a torn anterior cruciate ligament and a small tear to his internal meniscus — the fallout from defending an innocent wrestling takedown.

The news comes some seven weeks after the mixed martial arts star was forced to pull out of a Oct. 29 fight against Carlos Condit with a minor left knee injury and a pulled hamstring.

His fight was rescheduled to February, this time against Nick Diaz.

The UFC has since announced Diaz and Condit will fight Super Bowl weekend in Las Vegas for the interim welterweight title in St-Pierre's absence.

"I'll be back on top, I'll be back (as) champion," St-Pierre promised on a media conference call Wednesday.

St-Pierre believes the string of minor setbacks in recent weeks set the stage for the latest and most severe problem.

Known for training year-round at a punishing pace, St-Pierre acknowledged that he drove himself too hard.

"I believe there is only one person to blame for what happened and it's myself," he said.

He reckons while his left leg healed, he was overcompensating with his right leg.

For the UFC, St-Pierre's injury is a painful blow to the bottom line. UFC president Dana White has said the Canadian is the organization's biggest pay-per-view draw.

St-Pierre's doctor says he expects a complete recovery in six to nine months, but White tweeted that the fighter will be out for 10 months.

"I'm going to be back — stronger than ever," St-Pierre promised.

The good news for St-Pierre is he is a quick healer.

"His recovery rate is completely off the chart," said Sebastien Simard, St-Pierre's orthopedic surgeon. "He has amazing genetics, he has extraordinary physical capabilities and I know Georges has the discipline and the determination that's going to allow him to be back to the same level of competition as he was before the injury."

In training for Condit, he suffered a sprained medial collateral ligament to his left knee. St-Pierre tried to continue preparing for the fight, only to suffer a pulled hamstring on the other leg.

That prompted the St-Pierre camp, on Oct. 18, to pull the plug on the Condit fight.

Simard said the fighter's left knee was restored to health through rehab and physio.

But when he returned to training, he hyperextended his right knee trying to defend the takedown.

"He felt pain and he heard a crack inside his knee at that time," Simard told the conference call.

But St-Pierre was able to walk and there wasn't much swelling. So he continued training for several weeks.

"The symptoms of an ACL tear wasn't there at all," he said.

St-Pierre said MMA fighters are used to knocks in training. He thought this was just another.

The instability in his knee continued, however. While training last week in Las Vegas, he called Simard and an MRI was done. A physical exam — and a second opinion from another surgeon — confirmed the latest damage.

Simard said St-Pierre will undergo surgery or else face the prospect of even more serious damage.

St-Pierre (22-2) has battled injuries before.

After winning the title from Matt Hughes at UFC 65 in November 2006, he lost to Matt Serra at UFC 69 in April 2007 in a fight that was delayed two months due to another GSP knee issue.

St-Pierre won the title back from Serra at UFC 83 in April 2008 and has defended the 170-pound championship six times since.

St-Pierre also tore his abductor muscle in three places in a victory over Thiago Alves at UFC 100 in July 2009.

The UFC has been hit hard by injuries over the last year, reflecting a hard-nosed sport where the training can be tougher than the fights themselves. 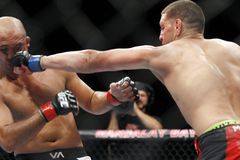 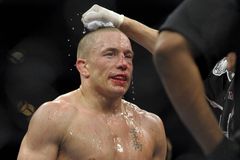