Youth was served in the opening race at the Canadian Olympic swim trials on Monday. A resurgent veteran later capped the evening in style.

The 14-year-old Toronto swimmer started strong and didn’t let up in a dominant performance at the Pan Am Sports Centre. Her time of eight minutes 29.49 seconds was almost four seconds under the Olympic standard needed for Tokyo.

“For the past year and a half this was my goal,” McIntosh said. “But before that, if I were to think to the 2016 Trials, I was on deck and I got to meet Penny ... I would never, ever imagine that I would be making the team five years later.”

McIntosh will be one of the youngest athletes in Tokyo. Brent Hayden, meanwhile, at 37, will be the oldest Canadian swimmer to compete at an Olympic Games.

He continued his remarkable comeback with a victory in the 50-metre freestyle. Hayden finished in 21.82 seconds, just nine-100ths of a second behind the Canadian record he set in 2009.

“It’s one of the greatest feelings ever,” Hayden said. “I’ve never been this excited to make an Olympic team.”

Hayden, the 2007 world champion and 2011 world runner-up in the 100 free, got back into the pool a couple years ago after a seven-year hiatus. The New Westminster, B.C., resident fell in love with swimming again and now is thrilled to be making a fourth career Olympic appearance.

“Getting there isn’t enough,” Hayden said. “My main goal is to go there and throw down a performance that I can be proud of.”

Joshua Liendo of Markham, Ont., was right behind Hayden in 21.90 to lock up another qualification spot. Toronto’s Kayla Sanchez booked her Olympic ticket with a personal-best time of 24.68 in the women’s 50 free.

Finlay Knox of Okotoks, Alta., trimmed nearly a second off his Canadian record in the 200-metre individual medley with a time of 1:58.07.

In the men’s 1,500-metre free, Eric Brown of Pointe-Claire, Que., was first in 15:19.69 but well behind the Olympic standard time needed to qualify.

Canadian record-holder Brittany MacLean, who like McIntosh came up through the Etobicoke Swim Club, was furiously cheering on the teenager from the first row of empty seats at the fan-less venue.

“She’s able to be almost an Energizer bunny and go, go, go,” MacLean said. “[That’s] with her size right now. But I do truly see the [strong] potential of what it could be.”

After the McIntosh win, the in-house DJ got into the spirit of things by blasting Summertime by DJ Jazzy Jeff & the Fresh Prince throughout the venue. During races, the speakers would blare artificial crowd noise to try to replicate a normal competitive environment.

The 2020 swim trials were cancelled with the postponement of Tokyo’s Olympic Games to 2021 because of the COVID-19 pandemic.

This year’s trials originally scheduled for April in Toronto were postponed to May and again to June while Ontario grappled with cases of infection.

The trials feature 185 swimmers from 64 clubs across the country. The competition, which continues through Wednesday, is held under pandemic protocols and restrictions, and is the primary means of selecting Canada’s Olympic swim team.

The Summer Olympics are set for July 23-Aug. 8 Games in Tokyo.

Canada can send a maximum of two swimmers for each event per gender. In addition to finishing top two at trials, swimmers must finish under the “A” qualifying time set by the world governing body FINA.

While they are assured spots on the Olympic team, the trials give swimmers valuable high-intensity race reps that have been in short supply due to the pandemic. 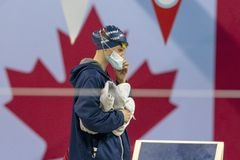 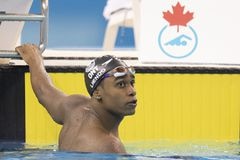 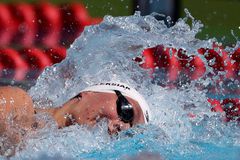