About an hour after he’d won the Olympic decathlon in record fashion on Thursday night, someone asked Damian Warner if he’d ever regretted becoming a decathlete.

“All the time,” Mr. Warner said, stepping on the end of the question. “All. The. Time.”

He was joking. Sort of.

Mr. Warner’s main competition, France’s Kevin Mayer, said the same thing, but more French: “The decathlon is pain. That’s why we do it.”

For a gifted athlete, choosing decathlon makes no sense. There are too many things to learn and not enough time or physical capacity to learn them. You won’t make real money. Sprinters are out there for 10, 15 minutes a day, tops. A decathlete is out there for seven, eight hours.

“Kevin and [bronze medalist] Ashley [Moloney],” Mr. Warner said, gesturing over his shoulder. “We’ve had the bad luck to be good at decathlon.”

Mr. Warner started off as a basketball player. He became a long jumper. And then, under the guidance of a couple of his high-school teachers in London, Ont., he became a decathlete.

At the beginning, none of them had any idea what that actually meant. They got tactical and training tips from YouTube videos. But sign-posted by Mr. Warner’s remarkable talent, they figured out a path to the big time.

But on Thursday, Mr. Warner didn’t just realize his vision. He ran through it.

Driven by several incredible showings – most notably, a long jump that would have won him a bronze medal in the individual competition – Mr. Warner posted one of the highest scores in the history of the discipline.

He is only the fourth man to surpass 9,000 points (with 9,018) and the first to do it in an Olympic Games. Some people here are breaking records. Mr. Warner just broke decathlon’s sound barrier.

He came out well afterward looking energized and depleted at the same time. In fairness, that’s how all decathletes look all the time. Mr. Warner finished work close to midnight on Wednesday night. He took an ice bath, got some treatment, ate a bit, went back to the hotel, got five hours sleep and was back at it at 9. Decathlon is the closest pro sports gets to having a day job.

The camaraderie of the brotherhood of pain is such that before the final event, the 1,500 metres, Mr. Mayer came over to Mr. Warner and congratulated him.

Mr. Warner said he spent some time on the start line thinking back to the beginning. Maybe a little too much time.

Mr. Warner is a sprinter and jumper by inclination. Endurance running in temperatures still lingering in the mid-30s two hours after sundown is not his idea of fun.

The gold medal was in the bag as long as he didn’t fall over. But 9,000 points was still going to take some work.

So remember, the next time you want to be within shouting distance of the best middle-distance runners alive, it’s easy. Just set yourself a target, miss it by a good margin and then “kick it.”

“It’s one of those moments where, like, all the dreams you had as a kid finally come true,” Mr. Warner said, and then looked around for some help. “I don’t know how to react to it.”

This country has a love of sports that are masochism by different means, pastimes such as hockey, lacrosse and local politics. Decathlon is the distillation of that idea.

Mr. Warner bunted when asked if his gold now made him the greatest athlete alive, as is often said about decathletes. How about the king of the romantics? Because what else would you call it when you, a genuine hopeful as a hurdler or a high-jumper, decide you’re going to learn how to throw the javelin in your non-existent spare time. And the discus. And just for kicks, do a little pole vault.

None of these things will lead to a proper career, not unless you are very, very lucky (and good). But in order to find out if that’s possible, first you have to put in a decade or so of ridiculously hard work.

It’s madness. Which makes it a perfectly Canadian thing to do. Based on a fifth-place finish by Warner’s debutant understudy, Pierce LePage, Canada might be doing it at a best-in-world level for the foreseeable future.

“After this decathlon, I’m not going to eat any healthy food. It’s just going be ice cream and cakes and pastries for the next 48 hours,” Mr. Warner said. He held up the bottle of water he was holding: “I’m tired of water.”

Mr. Warner was really working his audience at this point, getting laugh lines at will. When someone asked if female heptathletes should shift to the men’s 10-sport discipline, Mr. Warner dodged by saying he’d prefer it if instead he had to do one less – by eliminating the 1,500.

“How about we start a petition for that?” he said.

In a more just world, someone like Mr. Warner would be the biggest thing going. The combination of talent, achievement and charisma are unparalleled on the Canadian sporting scene.

If you were his marketing manager, you’d tell him to become a hurdler, like, tomorrow. Hurdling is cool. They can put you on a cereal box hurdling the word, “Wheaties.” Boom. That’s a down payment on a cottage right there.

Instead, Mr. Warner will continue down the quixotic path he’s been walking, running and jumping for half his life. 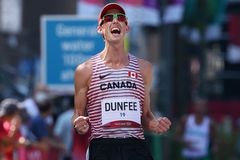 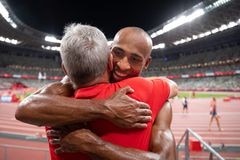 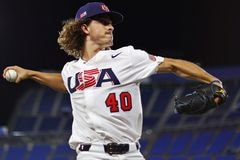