Kaillie Humphries says Canada’s governing body for bobsleigh has left her with no other option than to compete for another country.

The two-time Olympic champion is suing Bobsleigh Canada Skeleton (BCS) in an effort to obtain her release and race for the United States.

“I didn’t choose to leave,” Humphries told The Canadian Press in an e-mail Friday. “I’m being pushed out because I filed a harassment complaint.

“They stripped me of funding, support and forced me into this decision.”

In accordance with its harassment policy, the organization brought in an independent third-party to review the complaint. That review continues.

Humphries revealed the nature of her complaint Friday, saying she was “repeatedly and horribly verbally and mentally abused by the head coach of Bobsleigh Canada.”

“I have repeatedly told Bobsleigh Canada, who has done nothing to stop him, protect me, or get a timely resolve so I can be back competing.

“I was forced back to working with him multiple times, which resulted in major mental health issues over this past year.”

BCS’s response was to refer to a statement issued Thursday night.

“Bobsleigh Canada Skeleton abides by its harassment and discrimination policy that has been in place since 2006,” BCS said.

“The Alberta litigation matter by Ms. Humphries, the plaintiff, which names Bobsleigh Canada Skeleton as the defendant, is the subject of an open court process.

“As for the investigation of Ms. Humphries’ discrimination and harassment complaint made under the policy, we can’t provide any comments since this investigation is strictly private and confidential as provided in the policy. We look forward to the findings of the complaint review.”

Humphries piloted Canada to Olympic gold in 2010 and 2014 with brakewoman Heather Moyse, making them the first to repeat as Olympic women’s bobsleigh champions.

The duo carried Canada’s flag in the closing ceremony of the 2014 Winter Games in Sochi, Russia. Humphries and Phylicia George claimed bronze in 2018.

She also became the first woman to drive an all-female crew against men in a four-man World Cup bobsleigh race in 2016. Humphries has lobbied for women to get their own four-person races at the Olympic Games.

But she did not race for Canada last season after lodging her harassment complaint with BCS in August, 2018.

Humphries filed her lawsuit against BCS on Wednesday in Alberta court asking for $15-million in general damages, lost income and loss of future income.

In her statement of claim, Humphries says she signed her athlete agreement with BCS for the 2018-19 season and paid her team membership fee, but wasn’t nominated to the team and lost her Sport Canada funding as a result.

“It’s been over a year since I made my claim,” Humphries said in the e-mail.

“I have given BCS time for the process, and I offered many solutions to return to sport in a safe environment while the investigation takes its course.

“My national team athlete funding was removed after I filed my claim. There were punitive damages taken against me for filing the claim, and now I feel they are trying to end my career.”

“Um-This ain’t right! What can Canada do? I got nothin- but I got mad RESPECT for this woman and I’ve had dealings with Bobsleigh Canada Skeleton... She needs help and sliding for the USA is not an option for Canada. But if this plays out the way it’s going, I don’t blame her,” Montgomery said in a Twitter post.

Humphries will marry American bobsleigher Travis Armbruster on Saturday, which would allow her to represent the United States in competition if she is released by Canada, according to The Associated Press.

Under international rules, Humphries required the release by Sept. 30 to be able to compete for the U.S. this season, although an appeal is possible.

“We look forward to working with Kaillie once she gets her release from Bobsleigh Canada,” USA Bobsled and Skeleton said in a statement Friday.

“Kaillie is a tremendous competitor and has had the respect and admiration of USABS athletes and staff for many years.” 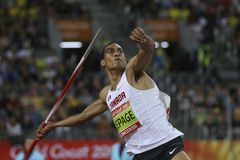 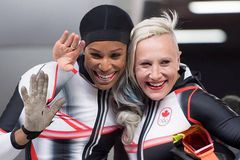