Caroline Ouellette was named captain of the Canadian women's hockey team for the Winter Olympics in yet another twist in the team's preparation.

Dan Church abruptly resigned as head coach of the team Dec. 12. His replacement Kevin Dineen effectively removed the 'C' from Hayley Wickenheiser's jersey and transferred it to Ouellette's.

Wickenheiser will serve as alternate captain in Sochi, Russia, next month, with the other 'A' rotating between defenceman Catherine Ward and veteran forward Jayna Hefford.

Since Cassie Campbell retired from the national team in 2006, Wickenheiser was Canada's captain for all world championships and Four Nations Cup tournaments, as well as the at the 2010 Winter Olympics.

Sochi, where Canada will attempt to defend the gold medal it has won three consecutive times.

Ouellette, from Montreal, is a three-time Olympic gold medallist and has been an assistant captain for the past several years. The 34-year-old will captain the Canadian women for the first time in her career.

"I was very surprised," Ouellette said Sunday in Calgary. "We didn't know what was going to happen. Kevin came in recently. I think he wanted to see how the team was doing before he made his decision. I think we have a dozen players who are captains within their own teams. We have so many great leaders. I think it could have been many of us. I'm very honoured.

"I don't think it's going to change how I play or prepare. I rely on the other veterans on the team. I rely on Wick, on Heffy to help me lead this team. I think we're going to do this together."

Ouellette is the third-leading scorer in Canadian team history with 238 points (85 goals, 153 assists) in 210 games. She's been part of six Canadian teams that won gold at the world championship.

Ouellette scored the overtime winner in Canada's most recent world title in 2012. She's physically imposing at five foot 11 and 170 pounds and when she's skating full speed, she swoops like a bird of prey.

Wickenheiser is Canada's all-time leader in international games (265), goals (166) and assists (204). Sochi will be her sixth Olympics, including her appearance in softball at the 2000 Summer Games.

"Obviously it's disappointing not to be able to wear the 'C' but at the same time I think it gives our team a different dynamic and maybe something we need going into Sochi in order to get everybody going in the right direction," Wickenheiser said.

"I guess I'd be lying if I said it didn't hurt. At the same time, sometimes you can lead from different areas. If it's a better decision for the team and gives us a better chance to win a gold medal, then that's what we have to do."

The 21-player women's Olympic team was announced Dec. 23, less than a week after Dineen was named the new head coach. The former NHL player said then he wanted some time to get to know the players before choosing his captain.

"My feeling was with the dynamics with this group that Caroline would do a great job of leading it," Dineen said. "It's a tough decision because there's excellent options out there.

"I think she's got great respect throughout the game of hockey. Her practice habits for one are second to none as well as the way she plays the game. She's a gamer. She has obviously a lot of respect in the room, which is an important part of leadership. But I look at leadership as plural. It's not singular. We're going to need everybody pulling in the same direction.

"Hayley Wickenheiser has done the heavy lifting for Team Canada and for women's hockey in Canada for a lot of years. I've been coaching 10 years and nine of it has been with men's teams and she would be an incredible option to lead pretty well every team I've ever coached.

"In saying that, with our group here, I felt that the best fit would be maybe a little change in dynamics and that was thinking in terms of making the decision."

The national women's team played their final game in Canada on Sunday before departing for their pre-Olympic camp in Austria. Canada fell 4-2 to the midget triple-A Calgary Buffaloes in Calgary.

Wickenheiser became tangled with a Buffaloes player in front of Canada's net late in the first period and went down hard onto the ice.

The 35-year-old from Shaunavon, Sask., was in pain as she skated towards Canada's bench, but she also blocked a shot en route. Wickenheiser returned for the second period, but looked uncomfortable and didn't play the third.

"Just more cautious than anything,"Wickenheiser said. "I didn't want to take any chances at this point. I just decided it was better to not finish the game and take care of myself. We've got a pretty big tournament coming up in a few weeks."

The Canadian women depart Thursday for Austria where they will play some games against local boys teams, but will also spend time simply recovering from a physically and emotionally exhausting five months.

Twenty-seven women congregated in Calgary in August to try out for the Olympic team. They've played almost 50 games with the majority of them against male midget triple-A teams in the Alberta Midget Hockey League.

The Canadian women are 0-8 under Dineen and 1-11 since Church departed.

Seven of their last 10 games have been on the road and include losses to the U.S. women in exhibition games in Grand Forks, N.D., St. Paul, Minn., and Toronto.

Hockey Canada designs a centralized season to be stressful and exhausting in order to battle-harden the team for the Olympics and an expected showdown with arch rival U.S. for gold.

There's been similar drama in the women's Olympic preparation before. Campbell replaced Therese Brisson as captain midway through the 2001-02 season prior to the Winter Games in Salt Lake City.

Canada lost eight straight games to the American women before finally prevailing in the Olympic final.

This last hard push for Sochi, plus the coaching and captaincy change, was wearing on the Canadian women. Ouellette looked exhausted after Sunday's game.

"I think we're in a bit of a difficult time right now," she said. "It's starting to play with our confidence. But we're also aware we are extremely tired. We've been training so hard. We've had so many training sessions this week.

"I hear the girls saying 'we're trying to push through the fatigue', but you can see out there that we're only explosive for so long.

"To be honest, this is the time to not panic. I remember at this time four years ago, it was exactly the same thing. We had a difficult little patch of time right before we left for Jasper. We had our pre-camp there and had a lot of rest and re-energized.

"I think it's a stressful time. We're leaving for the Games and we have to pack our lives away. Austria is going to be great for us. We're going to take some to rest and get closer together and really get better at the little things that are going to make a difference for this team."

Canada opens defence of its title Feb. 8 against Switzerland. 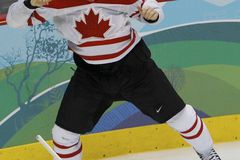 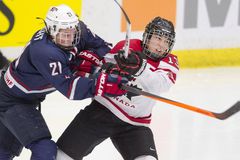 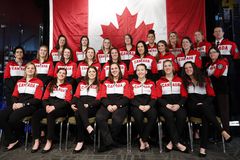