It's hard to explain, but experts would love to try. Canadian sprinter Andre De Grasse, at 5-foot-9 and 154 pounds and with a running style that has his right arm flying behind him, doesn't fit the conventional mold of a world class sprinter, reports Rachel Brady. So why's he so fast?

As Usain Bolt and Canada's Andre De Grasse head to the 2017 IAAF World Championship in London on August 4 in London, The Globe looks back at what makes these world-class runners so fast.

Some experts in the biomechanics of sport have been watching Canada's rising track star, Andre De Grasse, with fascination, dreaming of what it would be like to get the speedy phenom into their labs to find out how the first-time Olympian with the unconventional style runs so fast.

The 5-foot-9, 154-pound sprinter is shorter and less muscular than most of his opponents. He doesn't start races out of the blocks particularly well, and as he flies down the track, his right arm swings backward in a quirky sort of way. To boot, the 21-year-old youngster took up sprinting less than four years ago. Yet De Grasse, who ran the 100-metre dash in 9.91 seconds to capture an Olympic bronze medal in Rio, is defying many conventional beliefs about how a world-class sprinter should look and move.

The youngster from Markham, Ont., repeatedly pumps his outstretched right arm behind him when hitting his top speed during a race; meanwhile his left arm is bent and pumping in a more typical way.

The asymmetry is in sharp contrast to most of his opponents, who typically pump bent arms at both sides. De Grasse told a reporter from the International Association of Athletics Federations website last year that he attributes that extended right arm swing to an imbalance in his hips caused by a minor basketball injury in his childhood.

The experts say it's no surprise that De Grasse is being left to run the way he's most comfortable.

"In most cases, an increased right arm swing compensates for something in the motion of the left leg or hip," said Reed Ferber, assistant professor of kinesiology at The University of Calgary and director of its Running Injury Clinic. "If you limit that arm swing, whatever is going on in the left leg is no longer being compensated and you could limit the performance of that leg, which could slow him down or pose the risk of injury.

"You should never just force him to start tucking that arm in. You would have to figure out the source of the injury or weakness and solve that, and maybe then that extended arm swing would go away. There's definitely an asymmetry there, but it's clearly not hurting his performance."

The outstretched arm is so noticeable that the hashtag #AndreArm was trending in Canada on Sunday night, and now @degrassearm has its own parody Twitter account. It seems to be rivalling the "Ed Wing" of Toronto's Blue Jays slugger Edwin Encarnacion as Canada's most popular sports arm.

DOES THE ARM SWING AFFECT HIS PERFORMANCE?

Naturally, some wonder if De Grasse would run even faster if he pumped both arms symmetrically. Indeed, a debate has raged for decades among coaches, sprinters and biomechanics experts over the importance of arm swing to faster sprinting. 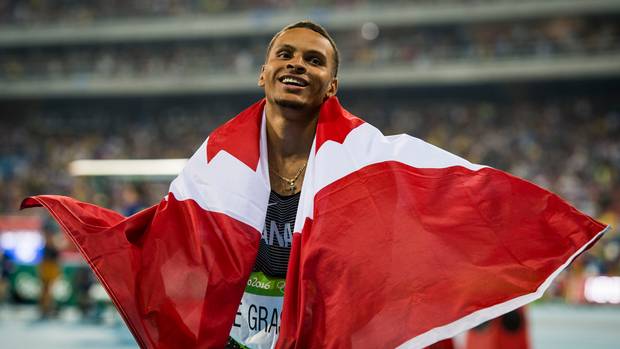 With a bronze at Rio 2016, the ride for Andre De Grasse has only just begun

One expert with experience testing world-class sprinters in a locomotor performance lab says arms have little effect on what is most important to elite sprinting – ground-reaction forces.

"His arm swing is not at all consequential to performance," said Peter Weyand, professor of applied physiology and biomechanics at Southern Methodist University in Dallas, Texas. "The arms are light pendulums that allow runners to stay balanced as they execute strides. Differences in the arm's motion and how it's angled at the elbow really doesn't matter to the sprinter's velocity and the interaction between the feet and the ground. Some of the old guard still think arm motion really matters, but most today realize it's not that consequential. The old guard might have tried to bend a sprinter's elbow into place, but they wouldn't have been able to offer much scientific data about why they were doing it."

IT'S FORCE, NOT SIZE

Andre De Grasse and Usain Bolt compete in the Men’s 100m Final during the athletics event at the Rio 2016 Olympic Games at the Olympic Stadium in Rio de Janeiro on August 14, 2016.

De Grasse was the smallest of the eight men who ran in Sunday's 100-metre final in Rio, although only slightly smaller than American Trayvon Bromell and South African Akani Simbine. But compared to silver medalist Justin Gatlin (6-foot-1, 180 pounds) and three-time Olympic champ Usain Bolt (6-foot-5, 207 pounds), the contrast in size was dramatic.

Sprinters come in varying shapes and sizes, from the super-tall Bolt to fellow Jamaican and two-time Olympic gold-medalist Shelly-Ann Fraser Pryce (5-foot-3 and 125 pounds). Weyand says there's no ideal weight or height for sprinting fast, but that the world's best have something in common – they apply greater ground force, a rapid punch to the ground, when their feet contact the track.

"What makes elite sprinters elite is how forcefully their feet hit the ground in relation to what they weigh," said Weyand. "Bolt gets a longer step with every stride cycle because he's so tall. In order to do what Andre does at his height, he has to have great leg mechanics to be able to attack the track. The motion of the leg through the setup phase – as it's repositioning and then as it first contacts the ground – that's the time you differentiate speed from one athlete to the next. Elite sprinters attack the ground well and get a bigger force, which makes them go fast. Based on how he races, Andre must be very good at doing that."

For someone who achieves such fast times, De Grasse isn't very fast out of the blocks. He fell behind Gatlin and Bolt in the first 20 metres on Sunday.

Beverley De Grasse, once a high school sprinter in Trinidad, introduced her son to track in the fourth grade, but he dropped it to play basketball.

De Grasse tried sprinting once again at age 17, when he went to watch a friend’s high-school track meet and ended up running in the 100-m dash. Despite racing in basketball shorts and borrowed spikes, and from a standing start instead of from the blocks, he attracted the attention of veteran track coach Tony Sharpe.

After transferring to the University of Southern California, De Grasse made headlines at the NCAA Championships when he won both the 100– and 200-m events within a span of 45 minutes.

De Grasse earned two bronze medals at his first IAAF World Championships, finishing behind Bolt and Gatlin in the 100-m event and standing on the podium with Canada’s 4x100-m relay team.

He opted to forego his final year of NCAA eligibility and become a professional sprinter. The rising star signed a multi-year equipment contract with Puma worth some $11.25-million (U.S).

"The shorter, less massive guys tend to be a bit better out of the blocks, but he's not – it's the weakest part of his race, and where he can still get better," said Weyand. "The curious thing about Andre and the strength of his racing is his top-end speed. He's so strong in the latter part of the race."

Some experts who watched Sunday's race believed that the Canadian sprinter benefits from his smaller, leaner frame down the stretch of races, maintaining his top speed longer than the others.

"De Grasse isn't carrying the kind of muscle mass that Gatlin does, for instance, so perhaps it's limiting how he can accelerate out of the blocks. But it seemed down the stretch of the race that De Grasse was able to maintain his velocity for a longer period of time," said David Frost, assistant professor in the faculty of kinesiology and physical education at the University of Toronto. "It would be interesting to explore whether De Grasse resists becoming as fatigued down the stretch as the other sprinters. Can he maintain the top speed he achieves for longer than the others? Does he contract and relax his muscles quicker than everyone else?"

OTHER UNIQUE ARMS IN SPRINTING

Many say even Jesse Owens – widely regarded as the greatest track athlete of his time, and among the top Olympians ever – had unorthodox arm movement as he blazed down the track to win gold at the 1936 Olympics in Berlin. Both of Owens's arms appeared to remain locked at a 90-degree angle throughout his races, rather than varying angles up and down throughout his race, as is more commonly seen.

"I coach a lot of kids, including my own son, and you often see young kids sprinting with one arm swinging and the other curled," said Robert Esmie, a sprinter who ran the lead leg at the 1996 Atlanta Olympics on Canada's gold-medal-winning 4x100-m men's relay team. "It's part of De Grasse's natural makeup and you shouldn't change it – I think changing his mechanics could make him slower at this point. Let him be as natural as possible. But I don't recommend kids start running around trying to force themselves to run with that Andre Arm if that's not their natural way."

MUCH TO LEARN FROM DE GRASSE

A large screen showing the medal ceremony of the men’s 100-meters awarding Jamaica’s Usain Bolt the gold medal, United States’ Justin Gatlin the silver medal and Canada’s Andre De Grasse the bronze medal, is reflected in a puddle on the track during the athletics competitions of the 2016 Summer Olympics at the Olympic stadium in Rio de Janeiro, Brazil, Monday, Aug. 15, 2016.

Whether it's identifying the root cause of the arm swing or measuring his stride rate, the strength of his muscles or the rate of force with which his feet hit the ground, researchers are intrigued about what this unique athlete could tell them about the science of fast movement.

Sports science, after all, might also help De Grasse get even faster as he prepares for the 2020 Olympics, where he's projected to lead the next crop of world-class sprinters.

"Within weeks of Bolt coming onto the scene, researchers were writing papers about what this big, tall, fast athlete could do, because he shattered what people believed about the sport, and I suspect the same thing could happen with an interest in De Grasse," said Frost. "De Grasse has opened our eyes and minds about what we originally thought was possible in sprinting. It would be fascinating to study him."