We motored into Poznan some hours after dawn. We being The Canadian Guys (TCG), well fuelled on instant coffee, large local apples and our Canadian tune for the day – BTO's Hey You. It's our thing – "Hey you/Na na na na!"

Poznan is a special place. Ancient, compact, friendly. The old downtown is bar-hopping heaven. If you're not working and only here for the game, that is.

I was here before, a memorable visit, rich in the insights into the internationalism of soccer and all attendant issues and sweet, but tricky complications. On the train platform in Warsaw two guys, dressed entirely in green sat beside me on a bench. We nodded our hellos. "So, what part of Ireland are you guys from?" I asked, figuring it was a good conversational gambit.

They both laughed. "I'm from Bonn," the nearest guy said. "In Germany." In response to my stupefied face, he explained, "I worked in Ireland for eight years. Best job I ever had, loved Dublin, started following Ireland. Germany has enough supporters."

When the train came, I got on at the wrong end of my carriage. Waiting politely for others to find their seats, I saw a group of guys coming toward me. Dressed in Team Canada hockey shirts, shorts and hockey helmets. I stared, as anyone would. "Hey, how's it goin'?" one of them said to me. "You're Team Canada," I stated, with solid obviousness."Sure thing," the guy said. I went to my assigned seat.

People craned their necks and stared. There were Croatians, Irish, German, Austrians and Poles on that train. And there, in the midst, a bunch of guys in hockey jerseys declaring their allegiance to Canada. You see a lot of things at soccer tournaments. Not this.

Inevitably I was drawn to them for a chat. And so I encountered Franco Sandrin, Mladen Palaic, Patrick Lennon, Robert Donaldson, Gord Milner, all from Montreal and Dean Juliano, originally from Quebec's largest city but now resides in Burlington, Ontario.

Middle-aged guys who've known each other for years, from different backgrounds but whose friendship is based on love of soccer. They've wanted to go to a tournament for years, see a few games, enjoy the spirit and fun of an intense all-soccer celebration. They had gone to Euro 2008, loved it and recognized that attendees at tournaments tend to dress in mock-stereotypes of their countries. So this time they came all-Canadian.

"People love it," Dean said. It took us an hour to get into the stadium in Warsaw. Everybody wanted a photo with us. We give people Maple Leaf pins and stuff like that." They were savouring the soccer and loving the vibe, spreading the message that Canada likes its soccer too.

I took a photo of them, and they insisted on one with me in the group. That's how I ended up wearing a hockey helmet and holding a beer on a train in Poland. With the Real Canadian Guys.

In Poznan I declined a taxi or a bus and walked to the Fan Zone to see the fun and frolics. Turning the corner onto the main street – no fun, no frolics but a demonstration against Euro 2012. Specifically the money spent on it while Poles lack affordable housing and daycare. I was told that every left-wing group was represented in the few thousand on the street – Communists, Socialists, Anarchists, Trade Unions. 'Love Football, Hate UEFA and Capitalism' the lead banner said, and that summed it up. Others placards demanded housing and 'Nurseries not Stadiums.'

A local priest, head to toe in black, like one of the Anarchists in the protest, walked down the sidewalk, head lowered, his ornate Sunday Mass vestments folded neatly in his hands. There was light jeering.

Down the street and around the corner in a warren of cobbled alleys, the Irish and Croatians were drinking, singing and making friends. They chanted at each other and chanted in unison. Some of the outfits were outrageous. A man in a lady`s Irish dancing dress with his girlfriend. Croatians in their team colour underwear. The bar owners, staff and shop keepers looked happy. The protest fizzled away.

There was a game later, but this was the best part, the happy and have-your-say part. I thought that cities should always be like this, full of voices and laughter, those in complaint and those in celebration, and really, no harsh words spoken. It felt as Canadian as Team Canada shirts and hockey helmets, and yet European and nicely so. 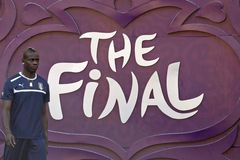