Even Jurgen Klopp cannot quite believe Liverpool’s lead over Manchester City this early in the season.

“That’s crazy, nine points,” the Liverpool manager said. “You cannot imagine that something like this can happen.”

It’s very real after Liverpool beat City 3-1 on Sunday, thanks to goals from Fabinho, Mohamed Salah and Sadio Mane at Anfield.

“Other people 100-per-cent said already that from now on Liverpool can only lose it,” Klopp said. “Well that’s a very negative approach, but you can see it like this. We don’t care.”

Only 12 games have been played, with another 26 to go in the pursuit of a first title since 1990 for the 18-time English champions.

Klopp is not getting carried away despite Liverpool’s top spot.

For the past two seasons, that position has been held by City. Now the two-time defending champions head into the international break down in fourth place.

The side immediately above them is not so unexpected, even if Chelsea’s ability to reinforce the squad was hampered by a transfer ban. But it’s the presence of Leicester in second place, reviving memories of its incredible 5,000-1 shot title win in 2016, that is shaking up the league.

It leaves the record 20-time champions far from sight of the Champions League places, even after Manchester United beat Brighton 3-1 on Sunday.

United is nine points adrift of neighbour City in seventh place. Wolverhampton is only behind United on goal difference after beating Aston Villa 2-1.

WOLVERHAMPTON, England Ruben Neves and Raul Jimenez gave Wolverhampton Wanderers a win over Aston Villa, ending a month-long wait for a victory. Wolves are unbeaten in seven and just one point behind the top five, sitting in eighth place. Villa is three points above the relegation zone and missed injured captain Jack Grealish. The hosts found a breakthrough in the 41st minute. Tyrone Mings brought down Adama Traore on the right and Joao Moutinho squared his free kick to Neves to send in a low drive from 20 yards. It was the midfielder’s first goal since August. Wolves were rarely in danger, but took until the 84th to net again. Traore broke down the right and squared for Jimenez to roll in before Trezeguet claimed Villa’s stoppage time consolation.

WOLVERHAMPTON, England Marcus Rashford struck off the underside of the crossbar to complete Manchester United’s victory over Brighton. Andreas Pereira put United ahead in the 17th minute before Davy Propper scored an own goal inside two minutes. Rashford netted in the 66th just after Lewis Dunk had reduced the deficit as United rose to seventh in the standings. Brighton never looked like securing their first win at Old Trafford, where Scott McTominay’s serious-looking injury late on was a concern. It was a better afternoon for fellow academy graduate Brandon Williams, who left to a standing ovation after impressing on his first Premier League start. United showed few signs of fatigue after beating Partizan Belgrade in the Europa League on Thursday and unnerved the Brighton backline from the outset. 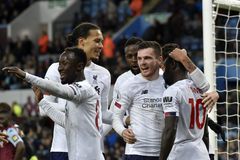 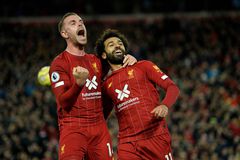 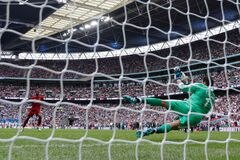