Aiming to quickly move on from its Champions League elimination, Juventus needs only a draw at home against Fiorentina on Saturday to clinch a record-extending eighth straight Serie A title.

Juventus is 17 points ahead of second-place Napoli with six rounds remaining and the Bianconeri also hold the tiebreaker over their southern rival with a better head-to-head record.

However, Juventus took a major psychological hit when it was beaten by a more inexperienced Ajax team on Tuesday.

Forward Paulo Dybala is out for up to two weeks after picking up a muscle injury against Ajax, but Cristiano Ronaldo likely won’t be rested again after sitting out a loss at Spal last weekend – when Juventus wasted a chance to clinch.

If Juventus loses to Fiorentina, it could still seal the championship on Monday if Napoli fails to beat Atalanta.

There are no matches on Sunday due to the Easter holiday.

After losing the past two games, PSG can guarantee the eighth title in its history with a home win against Monaco on Sunday. The celebrations can start earlier in the day, though, if second-place Lille fails to win at Toulouse.

PSG striker Kylian Mbappé, the French league’s top scorer with 27 goals, will hope to return after being dropped in Wednesday’s 3-2 defeat at Nantes. PSG coach Thomas Tuchel did not publicly give his reasons for leaving Mbappé out when the club needed a win.

Lille looks increasingly like guaranteeing second place and an automatic place in next season’s Champions League, but the race for third place and a spot in the qualifying rounds remains more open.

Lyon plays host to Angers on Friday night, Marseille travels to play relegation candidate Guingamp on Saturday, and Saint-Étienne has the toughest-looking match with a visit to seventh-place Reims on Sunday.

Manchester City is out for revenge in the last match of its trilogy against Tottenham.

The English champions were eliminated from the Champions League by Spurs in agonizing fashion on Wednesday, with an injury-time goal ruled out for offside by the video assistant referee in the second leg. They ended up exiting the competition on away goals in the quarter-finals.

City must quickly get over that disappointment, with Tottenham returning to Etihad Stadium for a Saturday lunchtime kickoff and seeking a win that could also damage the hosts’ Premier League title chances.

City is two points behind Liverpool having played a game fewer. The first of Liverpool’s four remaining matches is on Sunday at third-to-last Cardiff, which could climb out of the relegation zone with a win.

Tottenham is in third place, one point clear of Arsenal and Chelsea and three points ahead of Manchester United. Arsenal hosts Crystal Palace, Chelsea is at home to Burnley, and United visits Everton.

In the fight to avoid relegation, fourth-to-last Brighton, which is two points ahead of Cardiff, visits Wolverhampton Wanderers.

With a spot in the Champions League semi-finals secured, Barcelona turns its focus to taking another step toward clinching the Spanish league title.

Barcelona has a nine-point lead over Atletico Madrid, and the goal is to seal the title as soon as possible so it can fully focus on the European tournament it hasn’t won since 2015.

Barcelona hosts Real Sociedad on Saturday and will try to rebound from a scoreless draw at last-place Huesca last weekend, when it rested Lionel Messi and other regular starters ahead of the Champions League match against Manchester United on Tuesday.

In the fight for the final Champions League spot, fourth-place Sevilla visits fifth-place Getafe on Sunday, with the teams separated by one point with six rounds remaining. Sixth-place Valencia, three points behind Sevilla, visits Real Betis on Sunday. 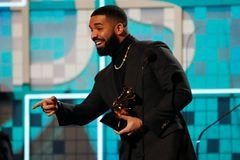 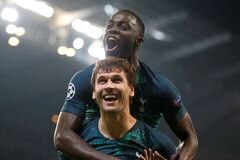 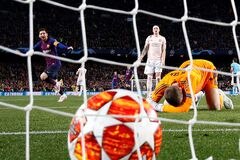