General manager Tim Bezbatchenko, who helped build Toronto FC into a championship side, is leaving the MLS club.

The 37-year-old Bezbatchenko, who is from the Columbus suburb of Westerville in Ohio, is taking an executive position with Columbus Crew SC, according to sources familiar with the negotiations.

It’s believed Bezbatchenko will oversee both the soccer and business side for Columbus. Gregg Berhalter, who had been Columbus’ coach and sporting director since 2013, was named manager of the U.S. men’s national team in late November.

Former New York Red Bulls sporting director Ali Curtis is in the running to be Bezbatchenko’s replacement in Toronto.

Toronto FC had no official comment on Bezbatchenko’s future but scheduled a news conference for Thursday with team president Bill Manning making a “major announcement.” In an e-mail to The Canadian Press, Columbus said “more details on senior leadership positions with Crew SC will be provided here in early January.”

Bezbatchenko, who was also TFC’s senior vice-president of soccer operations, joined Toronto in September, 2013, inheriting a team that was 4-14-11 on the season and a woeful 49-102-66 all-time in league play.

Under Bezbatchenko, Toronto posted a 72-65-48 regular-season record and reached two MLS Cup finals, finally hoisting the Cup in 2017 after winning the Supporters’ Shield with a then-record 69 points. Toronto also won the Canadian Championship in 2016, 2017 and 2018 and reached the final of the CONCACAF Champions League in 2018.

News of Bezbatchenko’s departure comes less than two weeks before players report to training camp. His successor will likely have to hit the ground running.

Big games await. TFC is set to kick off round-of-16 play in the CONCACAF Champions League on Feb. 19 in Panama against Club Atletico Independiente. The MLS season opener is March 2 in Philadelphia.

The franchise hopes to waste little time reassuring fans on the field that the fall from MLS champions in 2017 to 19th place in 2018 is just a blip.

Bezbatchenko arrived in Toronto as a 31-year-old league insider.

The brainiac went on to remake the team, filling key holes and installing a new coaching lineup. En route he showed an eye for signing talent and fitting it in under the salary cap.

Bezbatchenko landed first Jermain Defoe and Bradley and then Altidore and Giovinco as designated players. Defoe lasted just one season but Bradley, Giovinco and Altidore endured and became the foundation for TFC’s success.

In August, 2014, Bezbatchenko showed his ruthless side when he pulled the trigger on manager Ryan Nelsen and replaced the former New Zealand international with Greg Vanney, who went on to become the club’s most successful coach.

It could be argued that Bezbatchenko, known universally as Bez, orchestrated the change in coaching to end a power struggle with Nelsen.

On Aug. 29, on the eve of a game against New England, Bezbatchenko summoned TFC beat reporters to deliver a blunt message outside the front doors of the team’s well-appointed training centre — saying it’s time “to take it up a notch.”

Toronto lost 3-0 and, after the game, an irate Nelsen appeared blindsided by the criticism.

“It affected the guys,” he said of Bezbatchenko’s words. “What we do at Toronto FC is we keep it in-house – everything we do, we keep inside the four walls. And the players, coaching staff, everything, stays within the four walls.”

Bezbatchenko fired him the next day. Since then he has largely operated in the background.

Prior to the 2016 season, Bezbatchenko brought in goalkeeper Clint Irwin, fullback Steven Beitashour, midfielder Will Johnson and veteran defender Drew Moor — moves that lay the foundation of the 2016 run to the championship game when it lost to Seattle.

Not every move was a success. Much-hyped Spanish midfielder Ager Aketxe was a million-dollar-plus disappointment in 2018, but Bezbatchenko had far more hits than misses.

He joins a Columbus franchise under new ownership.

MLS announced last month that it had an agreement in principle with the Haslam and Edwards families to become MLS owners and take over operating rights starting this month.

The announcement follows news of a public-private partnership to construct a new downtown soccer stadium for the Columbus team. Precourt Sports Ventures, which had acquired the Crew operating rights in July, 2013, is looking to field a new team in Austin, Tex. 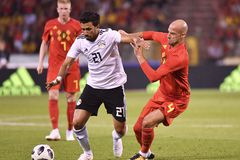 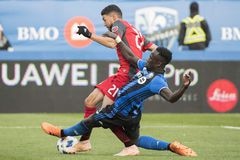 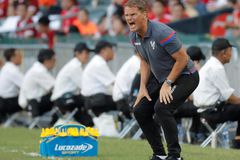