Michael Bradley’s adventure in defending started in Mexico, in the second leg of the CONCACAF Champions League final after Toronto FC Drew Moor went down in training.

“I looked at (Bradley) and we looked around. There was nobody else ... It was really a play out of necessity,” Toronto coach Greg Vanney recalled.

At the time, the move to move Bradley to centre back from his role as holding midfielder made strategic sense as well as filling a void. Trailing Chivas Guadalajara 2-1 after the first leg at BMO Field, Toronto needed goals. Bradley’s distribution from the back was seen as a way to trigger attacks.

Seven games and 40-plus days have passed since then. Bradley, the 14th TFC player to feature on defence this season, has been forced to start in the backline for six of those contests.

It’s never a good sign when your holding midfielder is tied for the fourth most starts on defence. Toronto, which conceded just 37 goals in 34 games last season, has leaked 23 goals in 11 contests this year.

The TFC skipper has done yeoman work as an emergency defender. But he was front and centre last week as Columbus rallied for three late goals to tie Toronto 3-3.

There was, however, plenty of blame to go all around on the goals.

Gyasi Zardes was left unmarked on a corner on the first goal, ultimately rising above Bradley to head the ball home. Bradley was the victim of a bad bounce on the second, unable to clear the ball before Alex Crognale tucked it in. On the third, a misdirected backpass by Marky Delgado and botched clearing attempt by Jason Hernandez preceded the Bradley tackle that led to a penalty kick and Federico Higuain’s trying goal.

Vanney has valued Bradley’s work in the back. But he wants him back in the midfield, hopefully Friday night in Philadelphia for the game against the Union.

Seventh-place Philadelphia (5-6-3) is seven points ahead of ninth-place Toronto (3-7-2) in the Eastern Conference but has played two more games.

“We’d like to (move Bradley back) as soon as possible,” said Vanney. “That’s the position he’s best at and he makes a lot of things tick for us when he goes into that position.

“At the point where we get our centre backs into games to start with the idea that they can play 90 minutes then we’ll get them on the field. I don’t like to go into games with centre backs that I know I have to sub.”

Defender Nick Hagglund would be next up, having come on in the 67th minute against Columbus and the 45th minute against Dallas. Eriq Zavaleta pronounced himself fit this week although Vanney was awaiting word from the medical staff on what kind of minutes he might be able to play.

Getting central defenders back has taken time.

Moor remains a long-term casualty. Hagglund needed close to eight weeks to return from what was termed a “reasonably significant hamstring strain.”

Zavaleta, Justin Morrow and Chris Mavinga have had injury setbacks. Hernandez needed time to get into game shape after returning to the team without the benefit of a training camp.

There are no complains about Bradley’s defensive work in the TFC camp.

“For sure he’s had to make a mindset shift. He’s done a great job of that over the course of the games. He’s done everything that we’ve asked,” he added.

“He’s shown most of the time that he’s more than capable of doing it. He’s filled in and done a great job back there,” said goalkeeper Alex Bono.

“Kudos to him for stepping in and never complaining and being the captain he is and leading our group from the back,” said Zavaleta. “But it’s time, I think, to start getting him into midfield again.

“At the end of the day I think what we miss the most from putting Michael in the back is that he’s not in the midfield, more so than what we lose from him in the back.”

Philadelphia will be without midfielder Haris Medunjanin and captain Alejandro Bedoya, both red-carded in last week’s 3-1 loss to Atlanta. 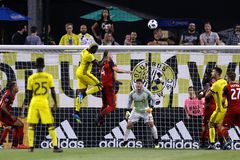 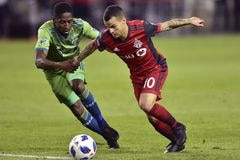 Chris Mavinga has a tooth removed as Toronto FC’s injury woes continue
May 31, 2018 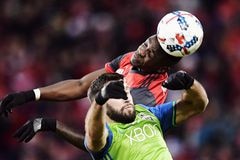