It has been an almost weekly occurrence this season. Rival coaches kill Toronto FC with kindness ahead of games and then watch their team hand TFC more heartache on the field.

Nashville coach Gary Smith calls the trip to Toronto “fraught with problems and difficulties, mostly based on the quality of our opponent.

“I would put this Toronto group, technically, in the top four or five in this league,” he said. “They’re a very, very well-drilled group and very, very capable group. And they’re a very dangerous group that, if given the opportunity, can make any team look absolutely stupid.”

The praise is directed at a Toronto team that has gone from runner-up in the regular-season standings last season to the league basement this year. Toronto (3-16-5) has lost six straight and is winless in eight (0-7-1) since holding Nashville to a 1-1 draw on Aug. 1 at BMO Field.

While Toronto can point to injuries and another extended pandemic-prompted stay south of the border, the fall from grace has been precipitous and hard to explain.

Faults in the roster have started to show.

Giving up 50 goals with 18 of those coming in the first 30 minutes of games – both league worsts – has helped grease the slide. TFC is 0-14-3 when conceding first. And while having 18 different players score is impressive, the lustre is less when 13 of those have just one goal and only Jonathan Osorio (four) and Ayo Akinola (three) have more than two.

TFC was 13 points behind Nashville when the teams met in early August. Today that gap is 26 points, with Toronto having picked up just one of 24 points available in the eight matches (0-7-1) since – while being outscored 17-5.

Second-year Nashville is unbeaten in three career meetings (2-0-1) with Toronto, starting with a 1-0 first-round playoff win after extra time that ended TFC’s 2020 season. This season, the Tennessee team won 3-2 at home on June 23 prior to the August draw at BMO Field. Substitute Luke Haakenson scored goals in the 83rd and 92 minutes to sink TFC in June.

“Toronto have got their own issues and questions to answer on Saturday,” Smith said. “And I’m sure with the group of players that they have, they’re very capable of answering some of those questions from their run so far this year if we allow them to.

“It’s not an easy place to go as we found out, what, a month, six weeks ago,” he added. “When all’s said and done, cutting to the chase, they have an exceptionally talented group of players who are very very capable. And I’ve said it multiple times, the real crux of the matter for me is are we going to put ourselves in a position to suffocate that talent or are we going to allow them to express that talent?

“I hope it is the first one, otherwise we’re in for a very difficult evening.”

Now his replacement, Javier Perez, is struggling to control the slide. Perez’s elevation from assistant coach on July 4 gave Toronto an immediate bump with the team going 2-0-3 in his first five games before the bottom fell out.

The protocols do not necessarily mean a positive COVID test. They can come in play for “high-risk behaviour” or “high-risk close contact” with someone who has tested positive, among other things.

Perez said both players were not feeling any symptoms and should be back “pretty soon.”

DeLeon was outspoken in March when it came to getting vaccinated.

“I’ve never had vaccines, I don’t get the flu shot. I don’t do any of that,” he said at the time. “I don’t take medicine, I don’t take prescription crap, any of that. That’s my personal choice and that’s the way I choose to live my life. And I will not change that for anybody.”

Perez and Toronto can take solace from a decent midweek performance in a controversial 1-0 home loss to Inter Miami CF in a game where the officiating was the major talking point.

“The message we got from the game is the team is playing well,” said a defiant Perez.

Toronto played a man down for 53 minutes after Kemar Lawrence sent off, was not awarded what looked like a legitimate Jacob Shaffelburg goal in the 87th minute and lost on a 95th-minute Christian Makoun penalty that should have been ordered retaken after Miami players encroached before the kick was taken.

Perez, normally the picture of calmness, was apoplectic after the game. Smith evidently was sympathetic.

“I actually thought Toronto did a fantastic job given the circumstances,” said the Nashville coach, one of the league’s straight-shooters.

“I have to be brutally honest. How it didn’t work out for them on Tuesday night, I still can’t fathom. They did virtually everything to get something out of the game,” he added.

Nashville did not play midweek so has had time to recover and prepare for a second straight trip to Canada. It won 1-0 in Montreal last Saturday, extending its win streak to three and unbeaten run to five (4-0-1).

Both Smith and star defender Walker Zimmerman talked up Toronto this week.

“I think on one hand you’ve got a really, really talented group of players that are just in a bad run of form. But that can turn so quickly. It really can,” Smith said.

Added Zimmerman: “They’re certainly better than the results they’ve had.”

“It’s an experienced group,” he added. “And yeah, they’re struggling for sure. But any time you take a team lightly, that’s when you get bit in this league.”

Zimmerman missed both of the earlier meetings this season. The game in Nashville came one day after his baby was born. And he missed the Toronto match with a hamstring injury picked up at the Gold Cup.

Nashville has lost just once in 13 games (5-1-7) when Zimmerman is in the lineup.

Veteran Nashville forward C.J. Sapong will become the 13th active player in MLS to appear in 300 career regular-season games if he sees action this weekend. 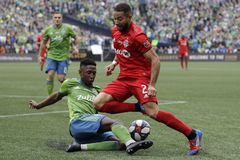 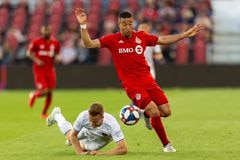