Go ahead and debate the lessons learned from this Women’s World Cup. Go on, I dare you. Two themes emerge and both are toxic.

First, the often farcical use of the Video Assistant Referee (VAR). The application of VAR was stepped up from how it was wielded by referees at last year’s men’s World Cup in Russia. Over the past few weeks in France, it became an exasperating interference with the flow of the game.

In Canada’s match against the Netherlands, Christine Sinclair stood for ages with the ball at the penalty spot while the referee consulted the VAR panel. It took almost four minutes before she reversed her decision. When France played Nigeria, the ref took the extraordinary decision to have a penalty retaken because the Nigeria keeper had moved a fraction off the goal line. It was a travesty of refereeing.

But to begin, let’s talk about the United States. From start to finish, the team’s supercilious attitude ignited some loathing. It also invited absurd endorsement from politicians and others who wouldn’t know a soccer ball if it hit them in the face.

The problem with sports, always, is that people project meaning onto everything. Okay, it’s both a problem and it’s what gives glorious relevance to sports at the top level. Everybody involved has to deal with that.

See, it’s never just about results; it’s about what the public extrapolates and the U.S. team seems starkly ignorant of this fact. That’s odd, since most of the players are university educated. What they don’t get is how the rest of the world sees them. When the team is dominant and arrogant about it, some people see the frightening, imperious military muscle of the United States embodied in the team’s strutting invincibility. That kind of deduction is human nature.

When the rest of the world looks at the smug behaviour and declarative, narcissistic goal celebrations of U.S. players, it sees a U.S. need to humiliate others. It sees more than childish brattiness; it sees a lack of compassion. It thinks of migrant children separated from their families and put in cages. No player goes to the World Cup emotionally equipped for humiliation, but that’s what the U.S. sets out to do – humiliate others and sneer.

From the 13-0 victory over Thailand to the semi-final win over England, the sneering went on. After the England match, Steph Houghton, who’d had her weak penalty shot saved, was being interviewed on British radio. Emotional and bravely trying to articulate her exhausted feelings, the England captain was mid-sentence when American Lindsey Horan appeared behind her chanting “USA! USA!” An exasperated Houghton can be heard saying, “There was no need for that, was there really? Ridiculous. That’s disrespectful, man.”

It is. And it is next-level disingenuous for American pundits and politicians to react to criticism of the behaviour with the knee-jerk response, “Would you say that if they were men?” In soccer, male players are castigated all the time for their actions.

Cristiano Ronaldo is as much despised for his swollen vanity as he is admired for his skill. Luis Suarez was universally lambasted for his deliberate handball against Ghana in the 2010 World Cup, which led to the last African team being knocked out; despised for racially abusing Patrice Evra on the field; and excoriated for biting an Italian player at the 2014 World Cup. There were calls for his expulsion from the sport of soccer.

Women soccer players do not have a monopoly on virtue because they fight for equal pay and taunt the U.S. president. It’s very American to think that way and it’s partly why the world loathes this U.S. team. Gloating is just juvenile, whether by male or female athletes.

As for VAR, what has unfolded is every soccer fan’s nightmare. Time was, the referee was God on the field. The decisions were his, or hers, to make. It was part of what made soccer reflective of life in its inimitable cruelty. At work, bad things happen and it might be that the boss is cruel or mistaken. There is no video-replay at work to let the boss know that you’ve been wronged. That’s how soccer worked, like life. Soccer has always offered a tragic view of the universe and that has been its poetry, its soul.

Now FIFA has embraced technology and, on the evidence of this Women’s World Cup, gone overboard. “VAR is cleaning football, making it more transparent and honest,” FIFA president Gianni Infantino said during the World Cup in Russia. It certainly had an impact. In that tournament, there were 29 penalty kicks awarded, which was 16 more than at the 2014 World Cup in Brazil. Of that 16, VAR was used 11 times to reach a decision.

Referees were mostly consistent in deciding what required a video replay. But in France during this tournament there has been no consistency and new rules have been applied, specifically about the goalkeeper’s actions during a penalty kick and possible resulting punishment. The rules on handball appear to be upended now. It used to be, as every player from school kid to professional knew, hand-to-ball infringed the rules but ball-to-hand was human error, unavoidable in the hurly-burly of play.

Now Pierluigi Collina, FIFA’s head of the refereeing committee – a great referee in his day without any use of technology – is giving news conferences in which he talks about the “natural” and “unnatural” position of the player’s body in handball decisions. It’s madness. And almost as maddening as the toxic high-handedness of the U.S. team. 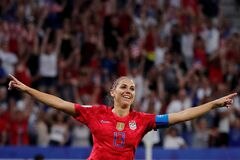 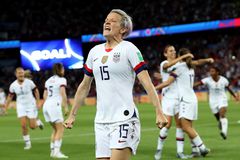