Carl Robinson is fine with the number of chances the Vancouver Whitecaps have been creating lately.

Finishing them off has been another story.

While the Whitecaps coach said he was happy with how his players performed on the pitch in last week’s 1-0 loss to the Colorado Rapids, he said they need to capitalize on ample opportunities in the box to secure a win when they host the Chicago Fire on Saturday.

“There are a lot of good things going on in the games,” he said after practice on Friday. “We’re creating a lot of chances. Too many chances, in fact.”

He wants to see players such as Kei Kamara chalking up multigoal games. The 33-year-old centre forward has posted six goals and three assists for the team this year, and he’ll have an opportunity to add to that tally against Chicago.

The Whitecaps and the Fire each have 23 points, placing each team in the sixth and final playoff spot of their respective MLS conferences.

They also have identical 6-7-5 records on the season, but Vancouver is coming off a pair of losses, while Chicago is on a five-game unbeaten streak.

The Fire scorched the Whitecaps in last year’s meeting, beating them 4-0 in Chicago.

Shutting down a hot team flush with stars such as centre midfielder Bastian Schweinsteiger and attacking midfielder Aleksandar Katai will be tough but doable, Robinson said.

Katai has eight goals and three assists this season, while Schweinsteiger has two goals and five assists.

“Good players score goals. And I think if we just continue to focus on our strengths, we’ll have no problem shutting them down,” Whitecaps defender Doneil Henry said.

In order to do that, Henry said the Whitecaps need to get sharper in the front third of the pitch.

“When we have that much possession, it gets easy to lose a little bit of focus,” he said. “I’m pretty sure if we can have a well-rounded performance from everyone, we can get three points.”

The team has scored 26 goals this year, while letting in 35.

The only scoring in last week’s game against the Rapids came from a own goal when Whitecaps keeper Brian Rowe made a diving stop, only to see the rebound hit Vancouver’s Marcel de Jong before rolling into the net.

The 31-year-old defender said on Friday that the team’s short week didn’t give him much opportunity to think about the loss.

De Jong’s confident the ’Caps can turn the tide against the Fire this week.

“We were dominating the whole game, but this time we have to put them away the first chance we get,” he said.

FAMILIAR FACES: Vancouver’s centre back Jose Aja and attacking midfielder Yordy Reyna are once again free to play, returning from suspensions doled out in the team’s 4-0 loss to the Philadelphia Union on June 23.

CAPTAIN QUESTIONABLE: Whether Whitecaps captain Kendall Waston will take the pitch remains unclear, after he suffered a left groin strain in last week’s bout with the Colorado Rapids.

DEAN’S RETURN: Former Whitecap Christian Dean will be making his first appearance back at BC Place since he was acquired by the Fire on Aug. 9. The 25-year-old defender played 12 league matches for Vancouver after being drafted by the Whitecaps third overall in the 2014 MLS superdraft.

DYNAMIC DAVIES: Look for Vancouver’s Alphonso Davies to continue his record-setting season. The 17-year-old midfielder has already scored two goals and seven assists in 2018, and he completed 10 dribbles in last week’s game, matching the league record. 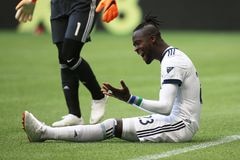 Whitecaps’ Henry is back – older, wiser and a lot healthier 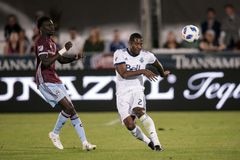 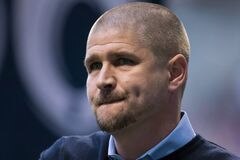