England, Germany, France and the Netherlands all started the long road to the 2014 World Cup finals in Brazil with victories but Italy stumbled out of the blocks when the European qualifying campaign began on Friday.

World champions Spain do not begin their bid to reach the finals until Tuesday, but apart from the Italians, held to a 2-2 draw in Group B in Bulgaria, there were no major problems for the continent's big guns.

England won their opening Group H match 5-0 in Moldova, while Germany strolled to a relatively modest 3-0 Group C win over the Faroe Islands.

A first-half goal from Abou Diaby gave France a winning 1-0 start in their Group I campaign against Finland in Helsinki, while the Netherlands beat Turkey 2-0 in Amsterdam in Group D with Robin van Persie and Luciano Narsingh, who hit the second in stoppage time, scoring for the Dutch.

Italy, who have been world champions four times, had a topsy-turvy start in Sofia before drawing 2-2 with Bulgaria with Pablo Osvaldo scoring both their goals to put them 2-1 up after they conceded first.

Georgi Milanov equalised for the home side with 24 minutes to play and Italy could not find a winner.

Two Italians who had better nights than their national team were Fabio Capello and Giovanni Trapattoni, the managers of Russia and Ireland respectively.

Ireland's bid to qualify for the World Cup for the first time since 2002 began with a dramatic win as two goals in the final two minutes from Robbie Keane, who netted a penalty, and a volley from Kevin Doyle gave Trapattoni's men a 2-1 win in Kazakhstan in Group C.

Capello's Russia also started with a win, with goals from Viktor Faizulin and Roman Shirokov, who scored from the spot, giving them a 2-0 victory over Northern Ireland in Moscow.

The highest scorers of the night were Bosnia, who began their quest for a first appearance in the finals by thrashing Liechtenstein 8-1 in Vaduz in Group G.

England were also among the goals, snubbing out any chance of a Moldovan upset with Frank Lampard scoring twice in the opening 29 minutes, the first after three minutes from England's 100th all-time penalty, as he took his England goal tally to 25.

Jermain Defoe marked his 50th appearance for England with a trademark strike after 32 minutes with James Milner and Leighton Baines scoring their first England goals in the second half.

Mesut Ozil was on target twice, scoring both his goals in the second half following Mario Goetze's first half opener as Germany beat the Faroes 3-0 in Hanover.

The Netherlands also picked up three points after a shaky start when Turkey went close to a first minute opener through Omer Toprak but they recovered to win with Van Persie and later Narsingh scoring.

Portugal did not have things all their own way either before winning 2-1 in Luxembourg after the unfancied hosts took a shock lead through Portuguese-born Daniel da Mota after 13 minutes.

He greeted the goal with a clenched fist, celebrating the equaliser not too exuberantly but apparently happy.

The visitors kept pressing and deservedly took the lead with a coolly-taken drive by Helder Postiga in the 54th minute.

Belgium, whose emerging squad includes a number of players now with high profile clubs in England, reinforced their claims for a place in the finals with a winning 2-0 start in Wales where Manchester City's Vincent Kompany and Tottenham Hotspur's Jan Vertonghen scored.

There was a tense atmosphere, two red cards and firecrackers in Podgorica where Montenegro and Poland, in the same group as England, fought to a 2-2 draw.

Jakub Blaszczykowski put Poland ahead from a fifth minute penalty but the Poles were angry after their goalkeeper Przemyslaw Tyton was struck by a firecracker thrown from the crowd, with more objects landing nearby.

Nikola Drincic and then, on the stroke of halftime, Mirko Vucinic, gave the hosts the lead, only for Poland to grab an equaliser through Adrian Mierzejewski 10 minuites into the second half.

Tempers became frayed with referee Kristinn Jakobsson sending off Montenegro's Savo Pavicevic and Poland's Ludovic Obraniak within two minutes of each other.

"Because of this one point is even more valuable."

A total of 22 qualifiers were played on Friday with two more on Saturday before the second round of European matches next Tuesday which sees world champions Spain start their campaign in Tbilisi against Georgia who will take confidence from their 1-0 defeat of Belarus.

Capello off to winning start as Russia beat N.Ireland
September 7, 2012 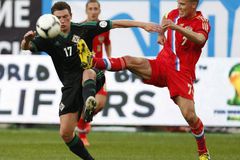