If it's not a must-win game, the Montreal Impact's home opener is certainly one they would very much like to win.

After opening the Major League Soccer season with two tight losses on the road, the Impact will play host to the Seattle Sounders before more than 25,000 at Olympic Stadium on Sunday afternoon.

It will be a first home game for new coach Frank Klopas, the first time Brossard, Que., native Patrice Bernier will play at home as team captain, and the last that star striker Marco Di Vaio will sit out from the three-game suspension he got for wading into a skirmish in the playoffs last October.

"It's the third game of the season, but we need to start getting some points," former Chicago Fire boss Klopas said this week. "It's good to be home.

"We definitely felt that we should have picked up some points on the road, but that's the game."

The Impact's home opener at Olympic Stadium was originally scheduled for Saturday afternoon, but forecasts of 15 centimetres of snow forced the date to be moved. Due to the instability of stadium dome, which is in need of replacement or repair, events cannot be held there if more than three centimetres of snow is forecast.

The Impact opened the season March 8 with a 3-2 loss in Dallas marked by a harsh penalty awarded to the home team. They followed a week later with a 1-0 defeat in Houston.

There was a feeling the team played better in the second game — that the defence was sharper, that better chances were created and that Di Vaio's replacement Andrew Wenger looked more comfortable up front.

"We have some momentum even if we're 0-2," said Bernier, who replaced the departed Davy Arnaud as captain. "It's not like we played bad and got cleaned out.

"We felt we progressed last game from the first game and now we're coming home. We have to defend our home and we've been very good at home the last two years. This is a game that could send us in the right direction and give us a positive boost."

They are up against a Seattle side (1-1-0) with a formidable attack, but which is coming off a 2-1 loss at home to Toronto FC on former Tottenham striker Jermain Defoe's pair of first-half goals.

The Sounders, old foes of the Impact from their A-League and United Soccer League days, have not beaten Montreal in MLS play. The Impact won 4-1 in Montreal in 2012 and opened the 2013 campaign with a 1-0 win in Seattle.

But Seattle has been among the better away sides in MLS, with a 29-28-24 road record since they entered the league in 2009.

Di Vaio and midfielder Andres Romero, both with three game suspensions, won't see action until a March 29 game in Philadelphia.

In Di Vaio's absence, winger Justin Mapp and attacking midfielder Felipe Martins have led the offence. The veteran Mapp was among their best players last season, but Felipe looks to have rebounded from a mediocre campaign and is looking more like the energetic playmaker he was as a rookie in 2012.

He has yet to score, but leads the team with eight shots.

"I had a few chances," he said. "But the hardest thing is to create chances and we're doing that.

"The only thing is we have to put it in the net, but that is going to come. It's not after one or two games you have to figure out what's going on. It's just soccer, no? One time a goal goes in and after that it comes natural."

Klopas likes what he's seen of the Brazilian.

"He missed the beginning of the season with injury last year and that was one reason his fitness level and sharpness weren't the same," the coach said. "He's a guy that sometimes doesn't get the points, but he helps the team in so many ways without the ball, with his work rate and stuff like that.

"I've been very pleased with him and I know he has a lot more room to grow."

Bernier, coming off knee surgery, missed the season opener but got in 72 minutes in Houston. The team is still waiting for Bernier, Felipe and designated player Hernan Bernardello to all be at peak form to see what the centre of their midfield can do. Bernardello was injured shortly after signing last summer.

The Impact are to play their first three home games at the Big O before moving outdoors to Saputo Stadium.

Klopas coached Chicago against the Impact in Montreal's first MLS game at Olympic Stadium in 2012, a 1-1 draw.

"It's amazing that two years ago I was on the opposite side in the first game here, with a tremendous atmosphere," he said. "I hope it's the same, only now they're cheering for me and our team." 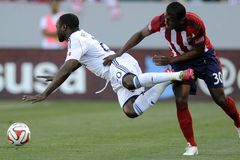 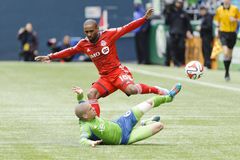