It was the fourth goal, or maybe the fifth, when the feeling moved from agonizing to surreal: the Germans scored yet again, and the crowd that was gathered in a Rio square to watch the game on a giant screen began to cheer. A self-mocking, despairing, disbelieving sort of cheer.

It would be seven to one, by the end of Brazil's World Cup semi-final.

With that almost inconceivable score, more suited to tennis than football, died Brazil's dream – of a sixth trophy, of finally winning at home, of fully reaping all the rewards of this World Cup.

"It's the most shameful thing," said Marlus Garcia, a 36-year-old lawyer. He was hoarse from screaming at the screen through the first part of the game, but somewhere around Germany's fourth goal he had lapsed into silence. "This is bigger than 1950."

That was the last time Brazil hosted the World Cup, and it lost in the final to Uruguay, in a game that Brazilians still talk about all the time. Or they did. Now, one assumes, they will have something else to discuss. "Historic Shame" blared the headline on the website of Folha de Sao Paulo, the country's largest newspaper. (The only time Brazil ever had a comparable score was a 7-2 loss to Italy. That was 1919.)

Mr. Garcia placed the blame on Brazil coach Luiz Felipe "Felipao" Scolari, who chose the players, and who, he said, trained them to play largely as a backdrop for the star Neymar da Silva Santos Jr.

Neymar, as he is known, did not play, sidelined by a broken vertebrae after a tackle by a Colombian player in the quarterfinal. "Felipao did not train them to play without Neymar, only for Neymar – and without Neymar, the Brazilian team revealed itself to be a fiction on the field," Mr. Garcia said.

Mr. Scolari said after the match, "If I think about my life as a coach, as a player, as a teacher, this was the worst day of my life. I'm going to be remembered as the coach from the 7-1. We accepted the risks and, now, we have to assimilate this and move on. This is what I'm going to do."

Brazilian president Dilma Rousseff took to Twitter, one of her preferred modes of communicating with citizens, to console them. "As all Brazilians are, I'm very, very sad for the defeat," she said in a series of tweets. "I feel this intensely, for all of us fans, and for our players. But let's not let ourselves be broken." She then quoted the lyrics of a classic samba that is an anthem for overcoming obstacles: "get up, shake the dust off, and get over it."

There has been rampant speculation here that Ms. Rousseff's political fortunes will be affected by the Brazil team's performance in the Cup; she will stand for reelection in October. Although the run-up to the Cup was dogged by protests against the government and FIFA, they died away when the games began. As of late Tuesday night there were no signs of any significant protests.

Lucienne Stickler, a 52-year-old engineer, said she had braced herself for the idea that Brazil might not win, because the Germans had shown themselves fierce opponents through the first rounds of competition.

But at 7 to 1, she threw her hands in the air, speechless.

Ms. Stickler was among those who tried to float a conspiracy theory – that some sort of FIFA trickery was behind the loss. Her companions in the square simply shook their heads, and she eventually trailed off. "They're just terrible," said her son, Lukas Stickler, a 19-year-old university student, said of Brazil.

Brazil's preeminent football authority, Juca Kfuri, wrote in his immediate post-match column that "Brazilian football was reduced to dust." He ended his analysis at less than half the usual length, saying, "I have no words to decribe [this match]."

There is feverish debate here about whether this defeat is in fact worse than the 1950 loss to Uruguay. That one has always been known as the "Maracanazo", after the Maracana stadium where it was played, and where Brazil lost 2-1. (To put an "azo" on the end of a word in Spanish connotes a harsh blow; the victorious Uruguayans got naming rights on that one.) Already Tuesday's game is being called "Minerazo", for the stadium in Belo Horizonte where it was played, the Mineirao. Football commentator Mauricio Savarese's first reaction was that 1950 was still worse, the seven-to-one-issue notwithstanding. "The team of '50 had skill and were favourites," he said.

Brazil faces one last possible humiliation: it will have to play someone for third place on July 12, and that someone could be archrival Argentina. It's hard to say which is worse: the prospect of losing to Argentina for third, or of seeing Argentina go all the way to the final, and win it, here on Brazilian soil.

Ms. Stickler, the engineer, has precious tickets for the final match, to be played here in Rio on July 13, but she said she will not go if it's Argentina on the field. "I'll sell my tickets and go to the spa," she said. "I can cheer for Germany, I can cheer for Holland, but I can't see Argentina win." 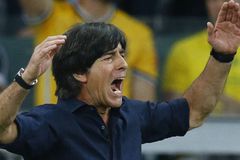