FIFA president Sepp Blatter is adept at avoiding problems, except on those occasions when he opens his mouth and words come out.

Finally facing a corruption scandal he can't shrug off as the work of wreckers and revanchists in the European media, Blatter opened a FIFA Congress here on Wednesday by attempting to hallucinogenically expand his empire.

"We shall wonder if one day our game is played on another planet? Why not? Then we will have not only a World Cup. We will have interplanetary competitions."

Blatter seems like the kind of person who plans to have his head chopped off and frozen just before he dies. Like Ted Williams, but even more annoying.

One assumes he was joking. It sounded that way. But Blatter long ago used up his mulligans on goofy pronouncements.

This is the same guy who once wondered if the women's game could be improved by tighter shorts, referred to the transfer system as "modern slavery" and suggested that the right way around 2022 World Cup host Qatar's legal ban on homosexuality is abstinence.

Blatter is a Bond villain, but of the Peter Sellers variety. He couldn't be more comically nefarious if he gave all his speeches while stroking a cat.

The 78-year-old Swiss is in the midst of … well, it would be wrong to call it a fight for his professional life. It's more of a frantic attempt to stave off an overdue professional death.

He campaigned for this, his fourth term as FIFA boss, by promising to leave. This was another transparently crooked backroom deal, struck between Blatter's power bases in Asia and Africa and the footballing aristocrats in Europe who've been shut out of the big decisions under his watch.

It has been Blatter's genius to entrust his own power to the (relatively speaking) powerless. He exists above the world of payoffs and palm greasing. Power is his currency. If the men under him prefer more tangible assets, he's happy to let them indulge. This one quality – an absence of personal greed – distinguishes successful dictators from the ones who get strung up in the public square.

UEFA's French president, Michel Platini, agreed to the latest compromise on the understanding that come 2015, it'd be his turn to control feeding time at the sporting world's most lucrative trough.

Blatter predictably went back on his only campaign pledge. He intends to run again. You must admire the man for consistent shamelessness.

It's all coming to an end here in Brazil. This is shaping up as the most locally unpopular and logistically cursed World Cup ever. Blatter made the mistake of assuming that history always repeats itself – that the inhabitants of the host nation would just be happy to be acknowledged. He didn't count on the financial clear-mindedness of the average Brazilian taxpayer.

Visitors are coming to grips with the idea that there will be at least a 20-year gap between World Cups that are not complete gong shows on the ground – from Germany 2006 and whatever country gets the 2026 iteration.

South Africa worked, just barely, because the country was compact enough to drive around and largely emptied out because of safety fears. Brazil is larger, packed to the gills and less prepared. Judging from the experiences of Sochi, Russia in 2018 will be worse. Qatar is tiny. It's also being built on the same principle as the pyramids – that grand works trump human lives.

So take your pick – massive inconvenience, moral peril or a combination thereof. It's a mug's choice.

On the record, Blatter will be scuttled here because of a corruption scandal involving the awarding of that World Cup to Qatar. The squealing done by European FIFA delegates – all of it self-serving – is nothing compared with the sober complaints of major sponsors.

Once they go sideways on him (and they've already begun), all the corrupt corporals in Blatter's personal guard will start plotting the coup. FIFA's money-laundering operation is bigger than one man. It must survive.

That's the ostensible reason, but Blatter's real undoing will be more prosaic. He's doomed because he took a predictably good thing and found a way to ruin it.

Making the World Cup work is simple – give it to a country that can afford it. If you can't find one, give it to one that has existing stadiums, then let them work with what they've already got.

Between them, Rio de Janeiro and Sao Paulo had five football arenas with a capacity of more than 40,000. Instead of using those – which would have cost less while drastically easing the problems of getting around – Brazil built boondoggles in backwaters like Cuiaba and Manaus. They will all be collapsing into the ground in five years' time.

That's what's driving people here insane – that the money spent was not only borrowed, but also wasted.

Here's how you screw up a World Cup: make the host lie to you about what it can manage; refuse to share in the profits; pretend that life's limitations are boundlessly malleable. That's where we've ended up. How did we manage that? It was all so easy, yet they found a way to make it impossible. As screw-ups go, it's one of remarkable ambition.

In the end, we will all confuse this. Blatter will believe he fell on the sword of progress. We will imagine he is paying for his sins. The truth is, all functional systems – natural and manmade – crave balance.

In order to achieve that in the World Cup ecosystem, there must be a great cleansing fire at the top. Then we can start to rebuild.

Doyle: A dose of some samba soccer would solve everything, really
June 11, 2014 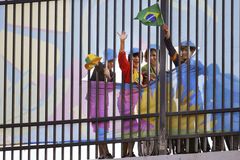