Ivan Semeniuk, The Globe's science reporter, is aboard the Amundsen on a weeks-long scientific journey to  explore the impact of the warming climate and northern development on the ocean.

Like the caribou on the tundra or the buffalo on the wild prairie, the animal that dominates the Arctic Ocean is an herbivore whose presence in the environment is so essential that it sets the rules by which others live and die.

It's also no bigger than a raisin.

Meet the copepod, a tiny crustacean that inhabits the northern seas in such teeming numbers that it outweighs all the other animal life here put together. And as the principal food source for a host of other species, it is now at the focus of research into how climate change could ultimately transform these waters.

"They are the little cows of the ocean," said Louis Fortier, chief scientist aboard the CCGS Amundsen, which this week has taken us into the Chukchi Sea, some 700 kilometres off the Siberian coast.

Among the tools that scientists regularly deploy off the ship's foredeck is LOKI, an underwater camera system that captures high-resolution images of the small life forms it draws in. Much of what LOKI sees is copepods, particularly of the genus Calanus, which plays a special role in the Arctic and helps illustrate why it's not so easy even for experts to know what the future will bring.

The reason comes down to fat, "the currency of life" in the Arctic, as Dr. Fortier puts it, because fat is food energy in its most concentrated form. The fundamental challenge for animals here is gathering up enough fat to survive through the long, dark winter. Falling short is a death sentence.

In the deep waters of the western Arctic Ocean, one particular copepod species, Calanus hyperboreus, has cornered the market on fat, which it harvests by feeding off algae growing on the underside of sea ice, and phytoplankton in the water.

After a short Arctic summer of eating as much as it can, Calanus retreats to the depths to avoid predators. But while it's near the surface it supports an astonishing array of predators, including dominant fish species such as Arctic cod. In this way, the fat gathered by the copepods eventually finds its way to seals, whales, polar bears and humans who live off the sea.

The mystery is what will happen to this well-oiled biological machine as the climate shifts.

On one hand, thinning sea ice might seem a boon because it mean more light entering Arctic waters and therefore more plant growth. But Calanus hyperboreus is programmed to rise up and feast just when plant production is blooming. If production starts too early because of climate change, and then tapers off as nutrients in the water are depleted, the deep-water copepods may miss their food window.

Other species of copepods may pick up the slack. Climate change means there will be winners as well as losers, and warming waters will open the door to species that are less adapted to extreme cold. The problem with these warmer water copepods is that they are smaller and tend not to accumulate as much fat, which could reduce the overall availability of a key resource in the ecosystem.

Understanding how all this might play out in the long term is the sort of esoteric but vitally important question that researchers on the Amundsen are trying to work out.

Among those paying close attention to copepods is Kohei Matsuno of Japan's National Institute of Polar Research. Japan has launched a sweeping cross-disciplinary project to study the impacts of climate change, and it has funded a contingent of scientists, including Dr. Matsuno, to work aboard the Amundsen this year.

In work published in 2011, Dr. Matsuno found evidence for both increased plankton productivity and a copepod species shift in the Chukchi Sea. Now he's back for more data.

At regular intervals, the ship drops a pair of fine meshed nets into the ocean up to 150 metres below the surface and hauls up copepods, which Dr. Matsuno bottles for analysis. While it's too early to draw conclusions, he has already seen some Pacific species turning up in the mix. Back in Japan, he'll work out how far they may be venturing into the Arctic Ocean.

Elsewhere on the ship, scientists probe other parts of the same tightly interwoven ecosystem. Mark Maftei, a contract biologist with the Canadian Wildlife Service, spends most days on the bridge scanning the horizon and counting seabirds as part of a long-term effort to track the state of bird populations in the Arctic.

This week, as the Amundsen moved north and west across a protrusion of continental shelf known as the Chukchi Plateau, Mr. Maftei sighted only a handful of birds. But such a snapshot can be deceiving. On a previous trip in the same area, he witnessed a large group of auklets in flight that he estimates numbered 11 million individuals.

Such birds spend their entire adult lives on the open ocean and return to land only to breed. They sustain themselves by periodically diving into the sea and feasting on copepods. It's another example of the hidden ecological network that makes life possible in one of Earth's most extreme environments.

"A human can't last 10 minutes out here," Mr. Maftei said. "Yet you see this bird bobbing around on the waves and it's in its happy place." 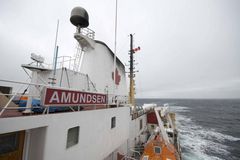 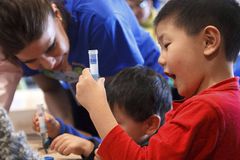 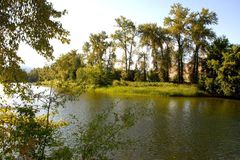