On the eve of India’s Independence Day, a team of activists and scholars released a report that paints a bleak picture of Indian-administered Kashmir, challenging official government accounts that life is returning to normal amid an indefinite curfew and communications blackout imposed just before the restive region’s special status was stripped by Parliament on Aug. 6.

The report, presented Wednesday in New Delhi, found that people living under the security lockdown expressed “enormous anger and anguish” in response to the surprise move by Prime Minister Narendra Modi’s government to revoke a constitutional provision that gave the predominantly Muslim population some degree of autonomy and prevented outsiders from buying land in the pristine Himalayan region.

It said protests have occurred daily, though the constraints on movement and communication mean that the response has been largely subdued.

The report’s authors, including economist Jean Dreze, described the situation in Indian-administered Kashmir as “grim” and said the clampdown had “crippled economic life” there. The team said it travelled to towns and villages the length of the Kashmir Valley between Aug. 9 and Aug. 13, including southern areas that have been recent hotbeds of rebel activity.

Maimoona Mollah, an activist on the fact-finding team, likened the situation in the region to Israel’s security protocol in the Palestinian territories.

“Kashmir is like an open jail,” said Vimal Bhai, another activist on the team.

Although the 4 million residents of the Kashmir Valley, where an insurgency has simmered for decades, are used to blockades, residents have told The Associated Press that what they’re experiencing is unprecedented .

Since independence from British rule and partition in 1947, India and Pakistan have fought two wars over their rival claims to Kashmir, with each left controlling part of the region.

The Indian side has seen several uprisings, including a bloody armed rebellion launched in 1989 to demand independence or a merger with Pakistan. About 70,000 people have been killed in that uprising and a subsequent Indian military crackdown that left Kashmiris exhausted, traumatized and broken.

Even before India’s Parliament voted Aug. 5 to strip Jammu and Kashmir of its statehood and split it into two federal territories, the central government imposed a curfew, suspended telephone and internet services and deployed tens of thousands of additional soldiers to the region — already one of the world’s most militarized zones.

In one of several videos and photos the activists showed reporters, a boy can be heard saying he was released one day before Eid al-Adha, the Muslim holiday that was celebrated on Monday. In the video, which doesn’t show his face, the boy, who says on camera that he is 11 years old, describes being held in police custody and beaten up. He says he encountered younger children in police custody.

Other people in the activists’ videos who were filmed with the camera pointed away from their faces said the region witnessed sporadic protests, some of which were met with force by Indian paramilitary forces.

The Associated Press could not independently verify the claims.

The activists said their report and images cast doubt on government and some Indian media accounts depicting Kashmir as calm.

A spokesman for India’s home ministry tweeted on Wednesday that law enforcement in the portion of Kashmir controlled by India had “showed restraint,” and that no bullets had been fired in the region. 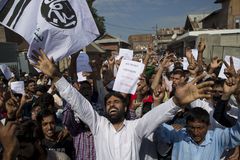 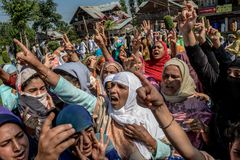