At the beginning of their uprising against President Alexander Lukashenko, the opposition in Belarus tried to persuade the police to switch sides and help topple the regime. But Mr. Lukashenko’s security forces have held firm, responding to six weeks of protests with growing repression.

Now, the opposition is naming and shaming some of those who have helped Mr. Lukashenko cling to power in the wake of an Aug. 9 presidential election that many Belarussians believe was won by his opponent, Svetlana Tikhanovskaya.

The Belarussian police and army have carried out their crackdown while wearing masks – including on Saturday, when balaclava-clad policemen arrested nearly 400 women who had been taking part in a peaceful demonstration in Minsk. Among those arrested was Nina Bahinskaya, a 73-year-old grandmother who has often marched at the front of the demonstrators through six weeks of protests calling on Mr. Lukashenko to resign.

As police were breaking up Saturday’s women-only march in the capital, Nexta, a pro-opposition Telegram channel, released the names of 1,003 police officers and Interior Ministry soldiers, with a promise to unmask more officers next weekend if the crackdown continued.

“It’s time to go over to the side of the people. Otherwise, your lives will never be the same!” Nexta said in a statement. The database, which Nexta said was obtained by “cyber guerrillas,” contains the names and ranks of the security officers, as well as their dates of birth and hometowns.

Tadeusz Giczan, a London-based academic who is part of the Nexta team, told The Globe and Mail that the leaked database contains about 14,000 names in total. He said the aim was to make it more difficult for security officers to continue defending the regime.

“Make their lives uncomfortable, that’s the least we can do,” he said in an exchange of messages. “We can show that the whole country actually hates them.”

Mr. Giczan said those named in the first batch were already being ostracized by their friends and family. “We received many reports from people who cancelled invitations to weddings for their friends from police and things like that.”

On Sunday, the regime acknowledged the leak, and vowed to bring those behind it to justice. “The forces, means and technologies at the disposal of the internal-affairs bodies make it possible to identify and prosecute the overwhelming majority of those guilty of leaking personal data on the internet,” said Olga Chemodanova, a spokeswoman for the Interior Ministry.

Despite the crackdown, tens of thousands of opposition supporters marched in Minsk and other cities on Sunday – chanting “This is our city!” and “Go away!” – in a 43rd consecutive day of protest. They were prevented from reaching Mr. Lukashenko’s palace by a thick line of riot police, who were backed by armoured vehicles mounted with water cannons.

Some protesters held placards reading “Only cowards beat up women,” a reference to Saturday’s arrests. Most of the 390 women who were detained were released overnight, including Ms. Bahinskaya, who marched Sunday with the opposition’s white-red-white flag draped around her shoulders.

The white-red-white banner was the country’s flag for its first three years of independence, after the collapse of the Soviet Union. After Mr. Lukashenko came to power in 1994, he replaced it with a flag almost identical to the one used while Belarus was part of the USSR.

Ms. Bahinskaya told a reporter on Sunday that police have taken more than 100 flags from her during the years she has protested against Mr. Lukashenko’s rule. Each time, she simply made a new one.

The retired geologist said she saw her role as helping to protect some of the younger protesters. “I noticed that the riot police more rarely beat protesters when they see elderly people among them,” she told the Associated Press. “So, I come out to protest as a defender, an observer and a witness. I’m psychologically and intellectually stronger than the police. Even among those who detained me, there were people who respected me.”

In the western city of Brest, near the country’s border with Poland, helmeted riot police were filmed on Sunday walking up to a line of protesters and spraying what appeared to be pepper spray in their faces at a close distance before dragging several demonstrators away. After the use of pepper spray in the city, Nexta released the names of another 1,000 officers stationed in the city, saying police there had “showed particular cruelty.”

Other videos, apparently filmed in Minsk, showed teams of men in balaclavas – but no uniforms – grabbing protesters off the street and roughly forcing them into unmarked vans.

Thousands of people have been arrested since the protests began, and while prison stays are often short, many protesters have emerged with wounds that they say were inflicted by police. At least four demonstrators have died under unclear circumstances after being arrested.

The Viasna human-rights group said that at least 110 people had been detained on Sunday, a number that was expected to rise throughout the night. The group counts 12,000 arrests and detentions since Aug. 9.

The release of the names of security officers is an effort to break a stalemate between the regime and the opposition, which threatens to draw in Belarus’s neighbours.

Russian President Vladimir Putin has made clear his support for Mr. Lukashenko, first by recognizing his controversial Aug. 9 election win, then by extending a US$1.5-billion loan last week that the opposition worries will be used to pay salaries and bonuses that will help ensure the loyalty of the security forces.

Meanwhile, a European Union plan to impose sanctions on 40 regime officials accused of taking part in election fraud and violence against the protesters appears stuck, with Cyprus – a country that has thick economic connections to Moscow – saying it will veto it unless the EU also hits Turkey with sanctions over a separate dispute.

The Baltic states of Lithuania, Latvia and Estonia have applied their own sanctions against Mr. Lukashenko’s regime, and the Polish government is reportedly on the verge of doing the same. Global Affairs Canada has said Ottawa is “actively considering options to support the people of Belarus and ensure that human rights are upheld.”

Last week, Canada and 16 other countries called for an investigation into the alleged election fraud and the violence against protesters.

Lithuania, which like Belarus was once ruled from Moscow as part of the Soviet Union, has gone the furthest in siding with the opposition – declaring that it recognizes Ms. Tikhanovskaya, who now lives in Lithuania in exile, as the country’s legitimate president. 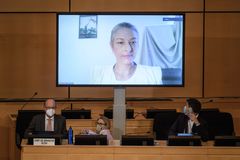 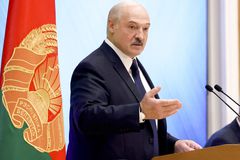 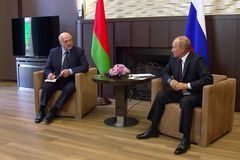