British Prime Minister Boris Johnson has renewed his call for an early election and said he’d rather be “dead in a ditch” than delay the country’s departure from the European Union.

In a speech before a group of new police officers on Thursday, Mr. Johnson said the country deserved a choice between his plan to pull out of the EU on Oct. 31 or the Labour Party’s call to extend the deadline.

When asked if he would ever consider delaying Brexit, Mr. Johnson replied: “I’d rather be dead in a ditch.”

The speech marked the latest salvo in a continuing standoff between Mr. Johnson and a “rebel alliance” of opposition and Conservative members of Parliament who have pledged to prevent the country from leaving the EU on Halloween without a withdrawal agreement.

The battle has been politically bruising for Mr. Johnson, who lost his majority in government through a defection and expelled 21 fellow Conservative MPs because they sided with the opposition. On Thursday, he suffered another blow when his brother Jo Johnson said on Twitter that he was stepping down from cabinet and resigning as a Tory MP.

The rebels have had the upper hand so far and they’ve managed to derail Mr. Johnson’s Brexit strategy by passing legislation that compels the Prime Minister to seek an extension if he hasn’t struck a deal with the EU by Oct. 19. Labour Leader Jeremy Corbyn has also said his party wouldn’t give the required consent for an early election until that legislation was given royal assent, which is expected on Monday.

The younger Mr. Johnson has been a strong supporter of Britain remaining in the EU and he has called for a second referendum on Brexit.

“In recent weeks I’ve been torn between family loyalty and the national interest – it’s an unresolvable tension & time for others to take on my roles as MP & Minister,” he wrote.

The Prime Minister described his brother as a “a fantastic guy” and added: “Jo doesn’t agree with me about the European Union because it’s an issue that obviously divides families and divides everybody. But I think what Jo would agree is that we need to get on and sort this thing out.”

Mr. Johnson has already lost one attempt to call an early election. On Wednesday, he failed to win the necessary support of two-thirds of MPs to hold early vote because the Labour Party abstained. He plans to try again on Monday with a similar motion that calls for an election on Oct. 15, which is nearly three years ahead of schedule. So far, the Labour Party has yet to agree on an election date, leaving Mr. Johnson in limbo.

Labour is facing a dilemma. Although Mr. Corbyn has said the party would back an early election once the no-deal legislation was given royal assent, many of his MPs want to hold off on a vote until after Oct. 31 in order to ensure that the country doesn’t crash out of the EU.

Labour MPs worry that if they agreed to an early vote, Mr. Johnson would quickly change the election date to some time after the Brexit deadline, ensuring that the country left the EU with or without a deal. They are also concerned that if Mr. Johnson won a majority in an election on Oct. 15 he could revoke the no-deal legislation.

“The problem that we had is that we couldn’t determine the date of the election,” Labour MP John McDonnell told the BBC on Thursday in explaining why the party has yet to agree on an election date. “Of course, Boris Johnson might come along and say: ‘I promise you it will be such and such a date.’ But he’s not renowned … for delivering on what he says. … We can’t trust him.”

On Thursday, Mr. Johnson scoffed at the concerns and insisted that he wanted an election on Oct. 15 “or even earlier.” And he played down suggestions that he may try to force an election by resigning as Prime Minister. “My intention … is to deliver on the mandate of the people,” Mr. Johnson said when asked if he would resign. “What I want to do now is to really give the country a choice.”

Earlier on Thursday, Mr. Johnson also tried to signal that Britain can thrive outside the EU during a meeting in London with U.S. Vice-President Mike Pence. The Trump administration has embraced Mr. Johnson and Brexit, and Mr. Pence said the United States was “ready, willing and able to immediately negotiate a free trade agreement with the U.K.” 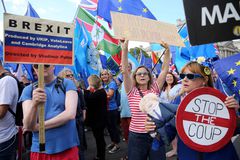