Brazilians were mesmerized Friday evening as former president Luiz Inacio Lula da Silva appeared to defy an arrest warrant and did not turn himself into police to begin serving a 12-year prison sentence for corruption.

Mr. da Silva had a theoretical deadline of 5 p.m. Sao Paulo time to present himself to federal police in the southern city of Curitiba, where federal judge Sergio Moro convicted him of corruption and money laundering last year.

But 5 p.m. came and went and the leftist leader remained inside the boxy glass headquarters of the national metalworkers’ union with which his improbable political career began, in a piece of riveting political theatre that played out into the night.

“What Lula is doing is a political move − what he wants from this scene is to be seen as beloved, a hero of the population,” said Daniel Falcao, a professor of electoral and constitutional law at the University of Sao Paulo.

There was also the suggestion that the former president was simply buying time: Late in the evening, his lawyers presented another 11th-hour petition to the Supreme Court, saying Mr. da Silva should not be jailed until another legal process concludes.

Prof. Falcao said that the order from Judge Moro that Brazilians interpreted as an arrest warrant, was in fact a sort of invitation, and he would now need to issue another compelling the state to take the former president into custody. Mr. da Silva’s lawyers were reported by local media to be negotiating the terms with police.

“Of course a strong political leader like Lula would use the opportunity to benefit politically,” Prof. Falcao said, adding that it was reasonable to expect this kind of posturing given that Judge Moro acted to issue the arrest invitation with unprecedented speed.

The judge ordered Mr. da Silva’s imprisonment just 22 minutes after the case was put up for processing, when Mr. da Silva lost a petition before the Supreme Court in the early hours of Thursday morning.

More than a thousand supporters of Mr. da Silva and his Workers’ Party spent the day waving red flags and chanting his old campaign slogans outside the union office. As dusk approached, the crowd grew tense, anticipating that police might arrive to escort Mr. da Silva from the building.

Mr. da Silva was convicted of having helped construction firm OAS SA win lucrative contracts with the state energy firm Petrobras SA in exchange for a three-bedroom beachfront apartment in a small town in Sao Paulo.

Many Brazilians celebrated the arrest warrant, and fireworks sounded at 5 p.m. in many cities across the country. Mr. da Silva is accused by his critics of having institutionalized a system of kickbacks for contracts. If he goes to jail, it will be an emblematic break from the impunity the powerful have traditionally enjoyed here.

But the country is deeply polarized and many others decried the legal process against him as political persecution by those who resented the redistribution of resources that occurred under the rule of his Workers’ Party. They say the hasty imprisonment order is an attempt to keep Mr. da Silva, who leads all polls, from once more standing for office in elections in October.

“Don’t expect us to walk to the slaughterhouse with our heads hanging low,” said Workers’ Party chair Gleisi Hoffman, half an hour after the apparent deadline expired. “We will stay here to show Brazil that there has to be a fight when you’re defending the rights of the people, the constitution and our democracy.” Ms. Hoffman is also charged with graft.

Saturday would have been the birthday of Mr. da Silva’s wife, Marisa, who died suddenly last year; local media reported that he might turn himself into police after a religious service in her memory at the union building.

With a report from Elisangela Mendonca 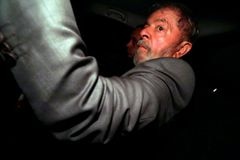 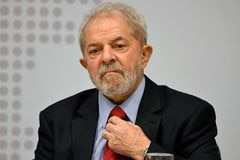 Brazilian general sets country on edge by hinting of military intervention if courts rule in favour of former president
April 4, 2018 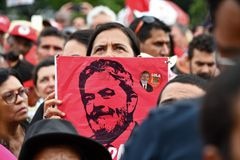