Judging by the relentless attacks on him by angry supporters of authoritarian African regimes, veteran Canadian lawyer Robert Amsterdam must be among the most reviled men on the continent.

Pro-government social-media accounts have denounced Mr. Amsterdam as an agitator, a spy, a neo-colonialist, an “economic hit man” and an “advocate of darkness.” Fake documents have been produced to discredit him. Regimes have banned him. There’s even a Twitter hashtag, promoted by his enemies: #AfricaHatesRobertAmsterdam.

But if he is loathed by autocrats, he is loved by many of Africa’s democratic politicians – several of whom have recruited him for their cause. His fame is a sign of an emerging strategy by Africa’s opposition leaders: mobilizing support from global activists to seek justice in international forums, allowing them to break out of the domestic controls that dictators impose on them.

Mr. Amsterdam, a graduate of Carleton and Queen’s universities in Ontario who heads a Washington-based international law firm, is among a growing number of lobbyists and lawyers who have helped transform African democracy battles into international issues, wielding an arsenal of legal and political weapons that have become increasingly valuable in recent years.

“There are all sorts of legal tools that people are much more aware of now,” Mr. Amsterdam told The Globe and Mail in an interview. “It’s amazing how many tools we have available now.”

Mr. Amsterdam is the lawyer for Tanzanian opposition leader Tundu Lissu, who has endured arrests and assassination attempts for years. He also works for Cameroon’s opposition leader, Maurice Kamto, who spent nine months in prison for election protests. And he represents Ugandan opposition leader Robert Kyagulanyi, who has faced volleys of tear gas and rubber bullets on the campaign trail for the Jan. 14 election.

These politicians, he said, are the “real heroes” of his campaigns. “I don’t try to be some human-rights activist. But I believe in human dignity. People come to my firm because we’ve been successful – there aren’t many guys like me who do this.”

While his work has infuriated many governments, it has provided a measure of hope to pro-democracy leaders who would otherwise be marginalized by rigged elections, repressive political systems, hostile security forces and self-censoring state media.

In a typical week, Mr. Amsterdam can be collecting videos of atrocities for an application to the ICC in The Hague, writing an analysis of the international law implications of a disputed election in East Africa, gathering witness accounts of police brutality for a Magnitsky sanction request, researching a brief against multinational cellphone companies for assisting in African internet shutdowns and posting tweets to alert the world to the arrest of an opposition politician.

Much of his evidence is initially harvested on Twitter and Facebook. “Social media is a huge leveller,” he said.

Mr. Amsterdam has a long history of international work. He built his reputation by representing Russian billionaire dissident Mikhail Khodorkovsky and the former Thai prime minister Thaksin Shinawatra in their campaigns for international support.

His work has come at a price. He has lost count of the number of countries that have banned him because of his work – he says it is at least seven or eight, including several in Africa. When he represented former Zambian president Rupiah Banda, the Zambian government called him a “dog of war” and a “mercenary” and banned him from the country.

While most of his African legal work is done on a pro-bono basis, he has also provided paid services for less democratic clients in other parts of the world.

U.S. government records in July show that his firm has received US$50,000 a month from the Turkish government for lobbying against schools affiliated with U.S.-based Islamic cleric Fethullah Gulen, whom Turkey accuses of orchestrating an attempted coup. His firm has also signed a US$4-million contract in February to represent Venezuela’s attorney-general in a campaign to lift U.S. sanctions against it.

In Africa, pro-government media outlets routinely accuse him of foreign interference. But says he believes that his international platform can amplify the work of African lawyers. “We can say things that local lawyers might not be able to say without being killed or having their offices blown up.”

Mr. Lissu, the Tanzanian opposition leader who was arrested after the Oct. 28 election and eventually fled to Europe, said Mr. Amsterdam has been a “massive help” to the struggles of democratic opposition leaders.

“These governments are very powerful and brutal, and they must be confronted not only nationally, which is very difficult, but also internationally,” Mr. Lissu told The Globe.

By publicizing the Tanzanian government’s harassment of the opposition parties during the October election, Mr. Amsterdam helped put the country in the global spotlight, Mr. Lissu said. “The world watched this election like never before. I think it was a very smart move to hire Bob Amsterdam for the fantastic work he’s doing.”

For African opposition leaders, another key lobbyist is Jeffrey Smith, a U.S.-based democracy advocate who gained fame with his social-media campaigning to help Gambians topple their long-ruling dictator, Yahya Jammeh, in 2017.

Today, through his firm, Vanguard Africa, he provides support to opposition leaders in Uganda, Cameroon and Tanzania, among others, by building their relationships with North American and European politicians and media.

“Some of the pro-democracy opposition leaders in Africa have really come to realize the value in global media attention,” Mr. Smith told The Globe.

“Often, it quite literally helps to keep them alive,” he said, recalling opposition leaders who told him they would have been killed by regime agents if they were not high-profile on the global stage.

Congressional leaders in the United States are often susceptible to the argument that autocratic regimes provide stability, he said. So it’s important to show them that “there are other viable options in these countries, waiting in the wings to move their countries in a better, more prosperous, more democratic direction.”

For his work, Mr. Smith, too, is sometimes accused of being a spy for U.S. intelligence agencies. “It comes with the territory,” he said with a laugh. “I’ve become desensitized to it.” 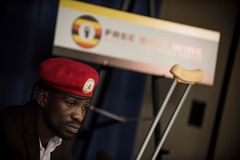