Officials from more than 100 countries will gather in London this week for a two-day conference aimed at promoting press freedom around the world, but it’s not clear what the meeting will accomplish and it has already sparked controversy.

Canada and the United Kingdom are co-hosting the Global Conference for Media Freedom, which opens Wednesday, and the organizers have set some ambitious objectives. They want each participating country to announce a national commitment to media freedom, spelling out how they plan to protect journalists and promote a free press. They also want all participants to sign a joint declaration on freedom of expression, pledging to work together on media freedom issues, and they hope to launch a global fund to provide legal services to journalists in jail or facing prosecution for their work.

The conference will also host a special panel of legal experts that has been set up to “counter draconian laws that hinder journalists from going about their work.” The panel is headed by human rights lawyer Amal Clooney, who has been appointed Britain’s Special Envoy on Media Freedom.

“A free press is the cornerstone of democratic societies and essential for the protection and promotion of human rights,” Foreign Affairs Minister Chrystia Freeland said in a statement Monday. “I look forward to two days of in-depth conversations on the current state of media freedom and on the practical steps we can take to bring about positive change in our own countries and around the world.”

British Foreign Secretary Jeremy Hunt added: “My aim for this conference is to work with my counterparts to agree on a way to protect media freedom and impose a cost on those who abuse it."

Attacks against journalists have been rising in recent years, and there has been growing concern about the number of governments taking steps to control the media under the guise of preventing “fake news.” A total of 99 journalists were killed in 2018, the deadliest year on record, while another 348 were detained and 60 taken hostage by non-state groups.

Conference organizers said they hope the meeting will put pressure on countries such as Saudi Arabia and Turkey. “We will be up front about those issues,” said one conference official who was not authorized to speak to the media.

They also hope to highlight a host of other issues through more than 20 panel discussions, with topics ranging from examining the financial pressures facing media organizations to promoting the safety of female journalists, reviewing religion in the media and highlighting the state of media freedom in the Americas, Western Balkans and Africa. There will also be a focus on the power of social media to spread false information. Last week the British government announced an £18-million program to counter the rise of disinformation across Eastern Europe.

But the conference is not without controversy. It’s still not clear who will be attending the meeting, and participants are not obligated to announce national commitments. The organizers have asked countries to send government ministers, but they still don’t know exactly how many will turn up. Many countries are expected to send low-level officials. U.S. Secretary of State Mike Pompeo has declined an invitation and is sending a deputy instead.

There are also few details about the global fund for legal services, including how it will be administered and where the money will come from. The organizers are hoping Canada and the U.K. will kick-start contributions.

Canada is also slated to hold a follow-up conference next year to assess the progress countries have made in promoting media freedom.

Russia’s ambassador to the U.K. has also complained that two Russian media outlets, the RT television channel and Sputnik news agency, have been denied credentials to cover the conference. The exclusion “amounts to direct, politically motivated discrimination,” the embassy said in a statement. Conference organizers said they rejected requests from outlets they considered to be engaged in propaganda, not news gathering. However, they said other representatives from the Russian government and media would be attending. 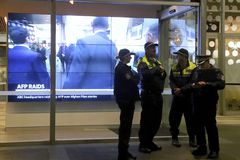