The FBI director warned anew on Friday about Russia’s continued meddling in U.S. elections, calling it a “significant counterintelligence threat.” The bureau has shifted additional agents and analysts to shore up defences against foreign interference, according to a senior FBI official.

The Trump administration has come to see that Russia’s influence operations have morphed into a persistent threat. The FBI, the intelligence agencies and the Department of Homeland Security have made permanent the task forces they created to confront 2018 midterm election interference, senior U.S. national security officials said.

“We recognize that our adversaries are going to keep adapting and upping their game,” Christopher A. Wray, the FBI director, said Friday in a speech in Washington, citing the presence of Russian intelligence officers in the United States and the Kremlin’s record of malign influence operations.

Wray’s warnings came after the report by special counsel Robert Mueller laid out in hundreds of pages of detail the interference and influence campaign carried out by Russian operatives in the 2016 election.

While American officials have promised to continue to try to counter, block and weaken the Russian intelligence operations, they have complained of a lack of high-level co-ordination. President Donald Trump has little interest or patience for hearing about such warnings, officials have said.

Trump views any discussion of future Russian interference as effectively questioning the legitimacy of his 2016 victory, prompting senior officials to head off discussions with him. Earlier this year, the White House chief of staff told Kirstjen Nielsen, then the Homeland Security secretary, not to raise the threat of new forms of Russian interference with Trump, current and former senior administration officials have said.

But outside of meetings with Trump, intelligence officials have continued to raise alarms. Officials including both Wray and Dan Coats, director of national intelligence, have said Russia has aimed its influence campaigns at undermining faith in American democracy.

“What has pretty much continued unabated is the use of social media, fake news, propaganda, false personas, etc., to spin us up, pit us against each other, to sow divisiveness and discord, to undermine America’s faith in democracy,” Wray said Friday. “That is not just an election-cycle threat. It is pretty much a 365-day-a-year threat.”

In response to growing threats from Russia and other adversaries, the FBI recently moved nearly 40 agents and analysts to the counterintelligence division, the senior bureau official said in an interview earlier this month. Many of the agents will work on the Foreign Influence Task Force, a group of cyber, counterintelligence and criminal experts. Initially formed on a temporary basis before the midterm elections, officials have made the task force permanent.

The Department of Homeland Security made its midterm election task forces permanent, folding them into an election security initiative at their National Risk Management Center. The National Security Agency and the U.S. Cyber Command have also expanded and made permanent their joint task force aimed at identifying, and stopping, Russian malign influence, officials said.

Intelligence officials have said Russia has kept up its interference operations since the 2016 election, continuing through the midterms and most likely to intensify during the next presidential campaign – albeit with new tactics.

Some intelligence officials believe Russia intends to raise questions in the aftermath of future elections about irregularities or purported fraud to undermine faith in the result. During the midterm elections, Cyber Command conducted an operation to temporarily take offline the most prominent Russian troll farm to keep its operatives from mounting a disinformation operation during voting or vote counting.

“The way Trump spoke about U.S. foreign policy, with a particular focus on Russia, NATO and some other cardinal aspects of U.S. foreign policy views were out of kilter with traditional, mainstream foreign policy thinking,” said Andrew S. Weiss, a Russia expert at the Carnegie Endowment for International Peace.

During the 2016 campaign, Weiss said, Russia tried to explore what motivated Trump, to determine any advantages that Moscow could glean from his pro-Russia stance.

“What motivates Trump is still a mystery,” Weiss said. “Every time he talks about this is so out of sync with the way Republicans, or Democrats, talk.”

Trump often asserts his desire for a good, or improved, relationship with Russia as one of his foreign policy goals and has argued Washington and Moscow could co-operate on a range of issues, such as counterterrorism.

At the same time, Trump administration officials have dismissed the notion the government has taken a soft position on Moscow, noting continued support for American troops in Europe, the expulsion of Russian diplomats and continuing sanctions on Moscow.

The aftermath of the 2016 election and Russia’s attempts to try to influence the American government illustrates the dangers of a loose, ad hoc approach to foreign policy that Trump embraced during the transition, and still favours to a degree, former national security officials said.

“If you can be led by the nose by foreign governments, that is the simplest definition of what a successful influence operation looks like,” Weiss said. “All sorts of leaders figure out there are ways to work with the Trump team that stressed informal channels, flattery and a freewheeling approach.”

“They are dilettantes, no question about it. They have no intelligence or national security background, and they shouldn’t be playing in a game they don’t understand the rules of,” Olson said. “These people are jumping into deep water, and they don’t even know how to swim.”

What Russia has gained from its influence campaign remains subject to debate. The strong sanctions against Russia remain in place, toughened by congressional action. Funding for American military presence in Europe increased under the Trump administration. The United States has kept up its support for the Ukrainian government and has made no official move to recognize Moscow’s annexation of Crimea in 2014.

But Trump’s skepticism of the value of the North Atlantic Treaty Organization and his occasional wavering over the mutual defence pact have strengthened Putin’s hand in Eastern Europe.

“My hunch is Putin feels pretty good about how it’s going for him,” Olson said. 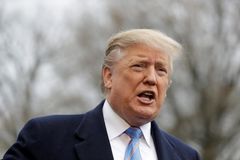 Trump vows to go to Supreme Court if Democrats try to impeach him Subscriber content
April 24, 2019