As people across Britain head to the polls on Thursday for elections to the European Parliament, there’s growing anger over Brexit and Prime Minister Theresa May’s failure to get the country out of the European Union nearly three years after a majority voted to leave.

Ms. May’s inability to deliver on Brexit – which means the country is grudgingly forced to take part in the continentwide vote – has left many voters seething and eager to punish her Conservative Party. Support for the Tories has fallen to 7 per cent in some opinion polls and Ms. May is facing mounting pressure from cabinet ministers to resign. On Wednesday, cabinet minister Andrea Leadsom, the House Leader, resigned in protest over Ms. May’s handling of Brexit.

“We feel betrayed, bitterly betrayed,” said Lindsay Edgar, a long-time Tory voter who is now backing the Brexit Party which was created just six weeks ago by ardent Euroskeptic Nigel Farage and is leading in opinion polls at 37 per cent. “Theresa May just hasn’t delivered and doesn’t have the will to deliver a meaningful Brexit,” added Ms. Edgar, who is a teacher in London.

In a sign of the soaring popularity of the Brexit Party, hundreds of supporters turned out for a boisterous rally on Tuesday in a part of London that voted 70 per cent to remain in the EU in the 2016 referendum. Amid thumping music and near-constant cheering, Mr. Farage railed against Ms. May and slammed all members of Parliament for failing to come through on Brexit. “We will get Brexit, but we just have to stand up and fight for it again,” he told the crowd. “You cannot trust the political class in this country. We must not trust the political class in this country.”

Thursday’s election is ostensibly about choosing members of the European Parliament and the results across Europe are expected to see populist and far-right parties make gains and deal a blow to the European project. But in Britain, Mr. Farage and others have turned it into a referendum on Brexit. He wants Britain to leave the EU without a deal and conduct trade with Europe under World Trade Organization rules. A vote for the Brexit Party, he told supporters, will not only deliver that message to Ms. May, it will also mark the beginning of what he called “a political revolution.”

It’s a populist appeal that resonates with people like Lance Forman. A lifelong Tory, Mr. Forman became fed up with Ms. May’s unsuccessful attempts to strike an EU withdrawal agreement and he’s now running as a Brexit Party candidate in London. “I campaigned for Britain to leave the EU in the 2016 referendum,” he said. “But I’ve just been watching that excitement sort of melt away and evaporate over the last few years with increasing frustration.” He’s also grown weary of the constant wrangling in Parliament. “We shouldn’t be arguing forever. We just need to get on,” he said. “And that’s the problem with the political class at the moment. They seem to be totally incapable of making decisions.”

Those who don’t want Britain to leave the EU have also been keen to use Thursday’s election as a litmus test for Brexit. Another new party called Change UK is campaigning for the government to revoke Brexit altogether. The party was founded two months ago by a group of 11 Tory and Labour MPs who left their respective parties in order to campaign for the country to stay in the EU. “We will keep saying positively, with our heads up and with pride, that being in the EU and remaining in the EU is great for our economy, it’s great for our security, great for our health, for science and research,” interim leader Heidi Allen, a former Tory MP, told a rally in Cambridge on Sunday.

Many in the crowd of about 100 were also former Conservative Party members who were furious at Ms. May’s handling of Brexit. “I think the Conservative Party is destroying the country and I think it’s very sad,” said Tom Sanderson, a businessman and former Tory member who lives outside Cambridge.

There have been calls for Change UK to form a “remain alliance” with other like-minded parties, including the Liberal Democrats, the Green Party and Scottish nationalists, to provide a counterbalance to the Brexit Party. That failed to materialize and many Change UK members have been urging supporters to vote strategically in order to block the Brexit Party. When combined together, the parties backing the EU have about the same level of support as the Brexit Party. But Mr. Farage appears to have more momentum and if his party elects the most MEPs on Thursday – the results won’t be made public until voting in all 28 EU members states ends on Sunday – he’ll be able to claim victory for a no-deal Brexit.

That worries Emma Taylor, a scientist and engineer who has never been politically active but decided to run for Change UK to press the case for Britain remaining in the EU. Ms. Taylor said she became a candidate largely “because of this aggressive, divisive, leave campaign which is being driven by the Brexit Party.” She added, “You just have to look at their campaign material, it’s making our country angry.”

Meanwhile, things have gotten so bad for the Prime Minister that her latest pitch for a “new Brexit deal” with the EU, which she unveiled on Tuesday, has been widely panned and only increased opposition to her leadership and her Brexit strategy. And if all that wasn’t enough turmoil, Britain’s second-largest steel maker, British Steel, collapsed into receivership on Wednesday with the owners blaming Brexit-related issues for the company’s woes.

But Ms. May is sticking to her plan and on Wednesday she defended her new Brexit deal in the House of Commons. “I genuinely believe that it is in the national interests for us to leave the European Union with a deal,” she told MPs. She added that if they approved her latest proposal, the U.K. would be out of the EU by the end of July, three months earlier than the Oct. 31 deadline set by the bloc. “Reject [the deal], and all we have before us is division and deadlock,” she said.

That has done little to convince many MPs or voters like Jonathan Knight. He’s a former district party chairman for the Conservatives in Cambridge and he has left the party for Change UK. Mr. Knight shook his head when asked on Sunday about Ms. May’s plans and the political upheaval. “The split in this country is the worst split we’ve had since the English Civil War in the 1650s,” he said. “It’s not going to go away whatever happens. It will take a generation.”

Britain’s Theresa May expected to announce resignation on Friday
Subscriber content
May 23, 2019 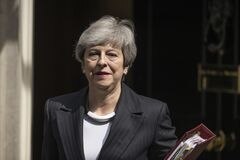 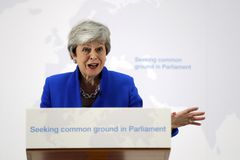 Former British foreign minister Boris Johnson says he will stand as candidate for Tory leadership
May 16, 2019 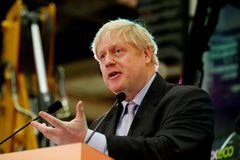