Georgia and Russia traded blame on Friday for an outbreak of unrest in Tbilisi sparked by the visit of a Russian lawmaker with the Kremlin announcing it would suspend passenger flights between the two countries to protect its citizens.

Georgian President Salome Zurabishvili had earlier blamed Moscow for the unrest, suggesting a “fifth column” loyal to Moscow had stirred up trouble, an allegation Russian Prime Minister Dmitry Medvedev dismissed as a distortion of reality.

Violence flared in the Georgian capital late on Thursday, where police used tear gas and rubber bullets to stop crowds furious about the visit of a Russian delegation from storming parliament.

Hundreds of people, both protesters and police officers, were injured, some seriously, as demonstrators pushed against lines of riot police, threw bottles and stones, and grabbed shields, drawing a tough response.

Though ostensibly about how Georgia handles relations with Russia, with whom it fought and lost a brief war in 2008, opposition parties have sought to seize the moment to press much wider and unrelated demands and called on people to take to the streets again on Friday evening.

Thousands gathered outside parliament where opposition leaders gave the floor to young activists and students.

“We are here to show our anger and our readiness to change this country,” one of the activists said.

Police were present, though not in large numbers, and the protest, unlike Thursday’s demonstration, was peaceful.

The speaker of parliament, Irakli Kobakhidze, resigned earlier on Friday, satisfying one of the protesters’ demands.

A coalition of opposition parties has demanded the interior minister’s resignation as well, the release of detained protesters, and talks on holding an early parliamentary election.

Tamar Kordzaia, leader of the opposition Republican Party, said protests would continue to press those demands.

Tensions between Moscow and Tbilisi are running high and President Vladimir Putin signed a decree on Friday suspending Russian passenger flights from Russia to Georgia from July 8 to protect people from what the Kremlin called criminal actions.

“Russia is our enemy and occupier. The fifth column it manages may be more dangerous than open aggression,” Zurabishvili posted on her Facebook page.

Medvedev said Zurabishvili either didn’t know what she was talking about or was wilfully distorting the situation, while the Kremlin blamed radical Georgian politicians for what it called “an anti-Russian provocation.”

Russian influence in Georgia remains a politically sensitive subject, with the opposition accusing the ruling Georgian Dream party – which backed Zurabishvili for the presidency late last year – of being too meek when it comes to confronting Moscow.

The small south Caucasus nation, a U.S. ally, fought and lost a short war against Moscow in 2008. The two countries have not had diplomatic ties since, and Russia went on to recognize the independence of two breakaway Georgian regions, South Ossetia and Abkhazia, where Russian troops are now garrisoned.

Protesters remain angry about the visit of a Russian delegation led by Sergei Gavrilov, a member of Russia’s lower house of parliament, which was taking part in an event designed to foster relations between Orthodox Christian lawmakers on Thursday.

Gavrilov addressed delegates in his native Russian from the Georgian parliamentary speaker’s seat, angering some Georgian politicians and citizens who want Russia kept at arm’s length.

Gavrilov told a Moscow news conference on Friday he believed the protests had been preplanned.

“Our common view is that there’s an obvious attempt in Georgia right now to stage a coup d’etat and that extremist forces are trying to seize power,” he said.

Kremlin spokesman Dmitry Peskov said the safety of Gavrilov and other members of the Russian delegation had been endangered.

“Everything that happened yesterday in Georgia is nothing other than an anti-Russian provocation,” said Peskov.

Georgia, criss-crossed by energy pipelines, hopes one day to join the European Union and NATO, an ambition which has infuriated Moscow, the country’s former Soviet overlord. 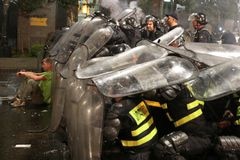