Gokhan Gultekin’s juggling act was in many ways typical of Hanau’s Turkish community: Taking care of frail parents, hustling to work at a late-night café, making some cash on the side at a second job and attending Friday prayers at the mosque across town.

On Friday, Mr. Gultekin’s friends mourned him at his house of worship, two days after “Gogo” was killed in a racially motivated shooting rampage that shook Germany and prompted fresh calls for a crackdown on far-right extremism and anti-immigrant scapegoating.

“We grew up in here in these streets, ran through the playgrounds, laughed together,” said Omer Demir, who described his recently engaged, 37-year-old friend as hard-working. “He had to be. He had to take care of his parents. If he had 50 euros, he would give 30 to his mother.”

On Wednesday, a 43-year-old German, Tobias Rathjen, shot to death nine people with immigrant backgrounds in this Frankfurt suburb before apparently killing his mother and himself. Five of the victims were reported to be Turkish citizens. Mr. Rathjen left rambling texts and videos in which he espoused racist views, called for genocide and claimed to have been under surveillance since birth.

Germany’s top security official, Interior Minister Horst Seehofer, said protection would be stepped up across the country at mosques and other “sensitive sites” in the wake of the attack.

“The threat posed by far-right extremism, anti-Semitism and racism is very high in Germany,” Mr. Seehofer said in Berlin.

In Hanau, German and Turkish flags flew at half-staff outside the Turkish-speaking DITIB mosque, where more than 300 people attended the regular Friday prayers.

“The mood is subdued,” said Adam Arslan. “I cannot accept this crime.”

The mosque opened its doors to the journalists who have swarmed into Hanau after the attack – not a usual practice in privacy-obsessed Germany. Members of the congregation discussed their concerns openly and offered reporters tea.

The chairman of the mosque board, Memduh Onder, said the community was not afraid, “because we are together,” citing the memorial gathering Thursday evening in front of City Hall, where German President Frank-Walter Steinmeier spoke. “The thousands of people on the square, most of them were German,” Mr. Onder said.

In the southern Romania village of Singureni, another of those killed in the attack was mourned by relatives. Vili Viorel Paun, 23, left school and went to Germany at the age of 16 to earn money to pay for his mother’s medical treatment, and was working as a driver for a delivery company. His parents followed him there.

His aunt, Nicoleta Danciu, described him as “a very gentle young man, polite as a girl, the nicest kid one can imagine. The pain from his loss will never go away.”

Family members last saw him in the summer, when he spent a few days and “gave us rides with his nice car,” which they said was the silver Mercedes seen in photos from the shooting site.

Photos of Mr. Paun stood outside the family house, candles lit by villagers around them.

On Thursday evening, thousands of people gathered in cities across Germany to hold vigils for the victims but also to express anger that authorities haven’t done more to prevent attacks despite a string of violent episodes in recent years. Last week, authorities arrested 12 men, including a police employee, on suspicion of planning attacks on Muslims and politicians.

Some have also called for a crackdown on the extremist and anti-migrant ideology that has crept into mainstream political debate with the rise of the Alternative for Germany party, or AfD. A top official in the centre-left Social Democratic Party, a junior partner in Chancellor Angela Merkel’s governing coalition, accused AfD of providing ideological fodder to people such as the Hanau gunman.

“One person carried out the shooting in Hanau. That’s what it looks like. But there were many that supplied him with ammunition, and AfD definitely belongs to them,” Lars Klingbeil told German public broadcaster ARD.

Parts of AfD already were under close scrutiny from Germany’s domestic intelligence agency. The party has rejected all responsibility for far-right attacks, including a deadly anti-Semitic shooting outside a synagogue and the killing of a regional politician last year.

One key question in the investigation is whether authorities or others were aware the gunman posed a threat. Peter Frank, Germany’s chief federal prosecutor, said investigators will examine his movements and contacts.

“That’s one of the points that’s particularly interesting to me in this investigation,” Mr. Seehofer said. “Who knew what.”

Opinion
In Germany, the terror threat is coming from inside the guardhouse
Subscriber content
February 20, 2020 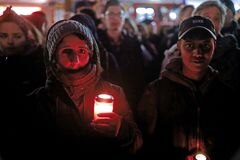 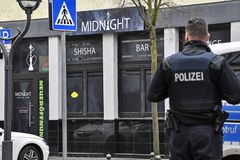