Turkey and Greece vowed Wednesday to defend their competing claims in the eastern Mediterranean as the NATO allies remained locked in a tense dispute over offshore energy exploration rights.

Greece announced plans to extend its territorial waters along its western coastline and held a second day of military exercises in waters where Turkey is challenging Athens’ asserted maritime jurisdiction.

To the alarm of western allies, the neighbouring countries sent warships to shadow each other this month in an area between Crete and Cyprus where Turkey has a vessel conducting drilling research. The Greek and Turkish militaries both engaged in exercises within that part of the sea on Tuesday.

“Turkey will take what is its right in the Mediterranean, in the Aegean and in the Black Sea,” Turkish President Recep Tayyip Erdogan said. “Just as we have no eyes over anyone’s territory, sovereignty and interests, we will never compromise on what belongs to us. We are determined to do whatever is necessary in political, economic and military terms.”

Erdogan’s tough words came despite mediation efforts by Germany, whose foreign minister conducted shuttle diplomacy between Athens and Ankara a day earlier in a bid to de-escalate the situation as Turkey and Greece engaged in competing military exercises at sea.

“We invite our interlocutors to get their act together and to avoid mistakes that will lead to their ruin,” he said.

In Athens, meanwhile, Prime Minister Kyriakos Mitsotakis said Greece is planning to exercise it’s legal right to extend its territorial waters along its western coastline from six to 12 nautical miles.

The planned extension along Greece’s Italy-facing coastline would not directly affect the territory at the centre of the Greek-Turkish dispute. But the prime minister told parliament that Greece was abandoning decades of “passive” foreign policy.

Mitsotakis, speaking in parliament, described Turkey’s actions as “illegal and provocative” but added that Athens was willing to start talks with Turkey as part of a German-brokered initiative if the Turkish seismic surveying work were halted. “Our position is crystal clear and can be summarized in six words: When provocations stop, talks can start,” he told lawmakers.

German Foreign Minister Heiko Maas on Tuesday flew to Greece and Turkey to appeal for a dialogue and defuse the tensions, warning that “any spark, however small, could lead to a disaster.” His visits came ahead of a meeting of EU foreign ministers in Berlin later this week, at which Turkey will be discussed.

After talks with Maas, the foreign ministers of both Greece and Turkey signalled readiness for dialogue but blamed each other for the standoff.

The Turkish vessel Oruc Reis has for weeks been carrying out seismic research escorted by Turkish warships. Greece, which says the ship is operating over the country’s own continental shelf in an area where it has exclusive rights on potential undersea gas and oil deposits, sent warships to shadow the Turkish flotilla.

Turkey disputes Greece’s claims, insisting that small Greek islands near the Turkish coast should not be taken into account when delineating maritime boundaries. Ankara accuses Athens of trying to grab an unfair share of the eastern Mediterranean’s resources.

Turkey is also prospecting for hydrocarbons in waters where Cyprus claims exclusive economic rights. Ankara says it is protecting its rights and those of Turkish Cypriots on the ethnically-divided island.

“Everyone must see that Turkey is not a country whose patience can be tried, whose determination, capabilities and courage can be tested. If we say we’ll do something we’ll do it and pay the price.,” Erdogan said Wednesday. “If anyone wants to stand before us and face the consequences, they are welcome to. If, not stay out of our way and we will continue with our work.”

The Turkish leader spoke during an anniversary celebration marking the 1071 battle of Manzikert, during which Turkish Seljuks beat Byzantine forces, gaining entry into Anatolia. ––– Gatopoulos reported from Athens. Elena Becatoros in Athens contributed. 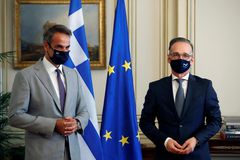 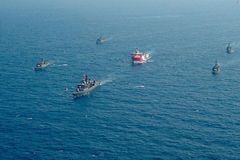 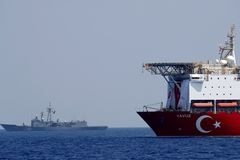