Hong Kong’s leader, Carrie Lam, said on Tuesday she and her team would begin dialogue sessions with the community next week, while reiterating that the violence that has roiled the city over three months of protests must end.

Ms. Lam, who is under pressure from Beijing to defuse the public anger stirring the protests, said the dialogue sessions would be as open as possible, with members of the public able to sign up to attend.

“Hong Kong society has really accumulated a lot of deep-rooted economic, social and even political issues. I hope these different forms of dialogue can provide a platform for us to discuss,” Ms. Lam told reporters at a weekly briefing.

She said the issues included housing and land shortages in one of the world’s most densely populated cities of 7.4 million. Young people are particularly frustrated by the high cost of finding a place of their own to live.

“But I have to stress here, dialogue platform doesn’t mean we don’t have to take resolute enforcement actions. Suppressing the violence in front of us is still the priority,” she said.

The former British colony has been roiled by nearly four months of sometimes violent protests.

The trigger for the unrest was an extradition bill, now withdrawn, that would have allowed people to be sent from Hong Kong to mainland China for trial.

But the demonstrators’ demands have broadened to include universal suffrage and an independent inquiry into their complaints of excessive force by the police.

Tanya Chan, a pro-democracy legislator, said in Geneva on Tuesday that Ms. Lam’s overture was a “political gesture.”

“I don’t see any kind of meaningful reasons to have dialogue with Mrs. Carrie Lam. All our demands are so clear from the very beginning and she knows this very well,” Ms. Chan told a news conference.

“If she keeps on telling us [there will be] no commission of inquiry, no universal suffrage, then I think that is the end of it. So it’s not fruitful to meet her at all,” she said.

Hong Kong returned to China in 1997 under a “one country, two systems” formula that guarantees freedoms not enjoyed on the mainland – including a much-cherished independent legal system.

But many residents complain about what they see as creeping interference by Beijing in Hong Kong’s affairs despite the promise of autonomy.

Ms. Lam, who has been a focus of protesters’ anger, capitulated to one of their main demands on Sept. 4, announcing the full withdrawal of the extradition bill.

But some said that was too little, too late, and the protests have continued.

Brawls also broke out between anti-government protesters and others who support Beijing.

Nearly 1,500 people have been arrested since the protests intensified in June.

The turmoil is beginning to hit the economy of the financial hub.

Credit rating agency Moody’s changed its outlook on Hong Kong’s rating to negative from stable on Monday, reflecting what it called the rising risk of “an erosion in the strength of Hong Kong’s institutions.”

The institutional features that grant Hong Kong greater political and economic autonomy – together with the city’s intrinsic credit strengths – accounted for its higher rating than China, the agency said.

“We do not concur, especially if the justification for that sort of change in outlook is premised on whether we’re still upholding ‘one country, two systems,’ ” she said.

China also says it is committed to “one country, two systems” and it denies meddling in Hong Kong while stressing it is an internal Chinese issue.

China has accused foreign powers, particularly the United States and Britain, of fomenting the unrest and told them to mind their own business. 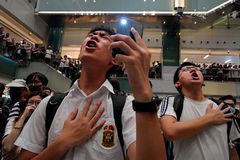 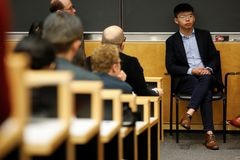 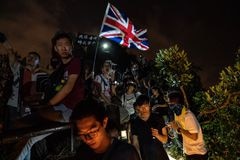