After the outbursts of violence that they witnessed in the past, Zimbabwe’s doctors thought they had seen it all. But some who recently fled the country have been left shaken by the gunshot and torture injuries they have treated since the start of a crackdown by Zimbabwe’s security forces.

Norman Matara, a Zimbabwean doctor who took shelter in South Africa this week to escape the crackdown, warned a group of journalists on Tuesday to prepare to see some gruesome injuries. Then he displayed a few graphic photos of the victims: gunshot wounds to the head at point-blank range; skin covered in welts from severe beatings; deep cuts in limbs from broken glass, allegedly done deliberately by security forces as a form of torture.

The crackdown began last week after Zimbabweans took to the streets to protest the doubling of gasoline prices, the latest omen of a worsening economic crisis that has included a soaring inflation rate, high unemployment and a collapsing currency. About 700 people have been arrested since then, including prominent activists, union leaders and opposition politicians. Many others have gone into hiding. 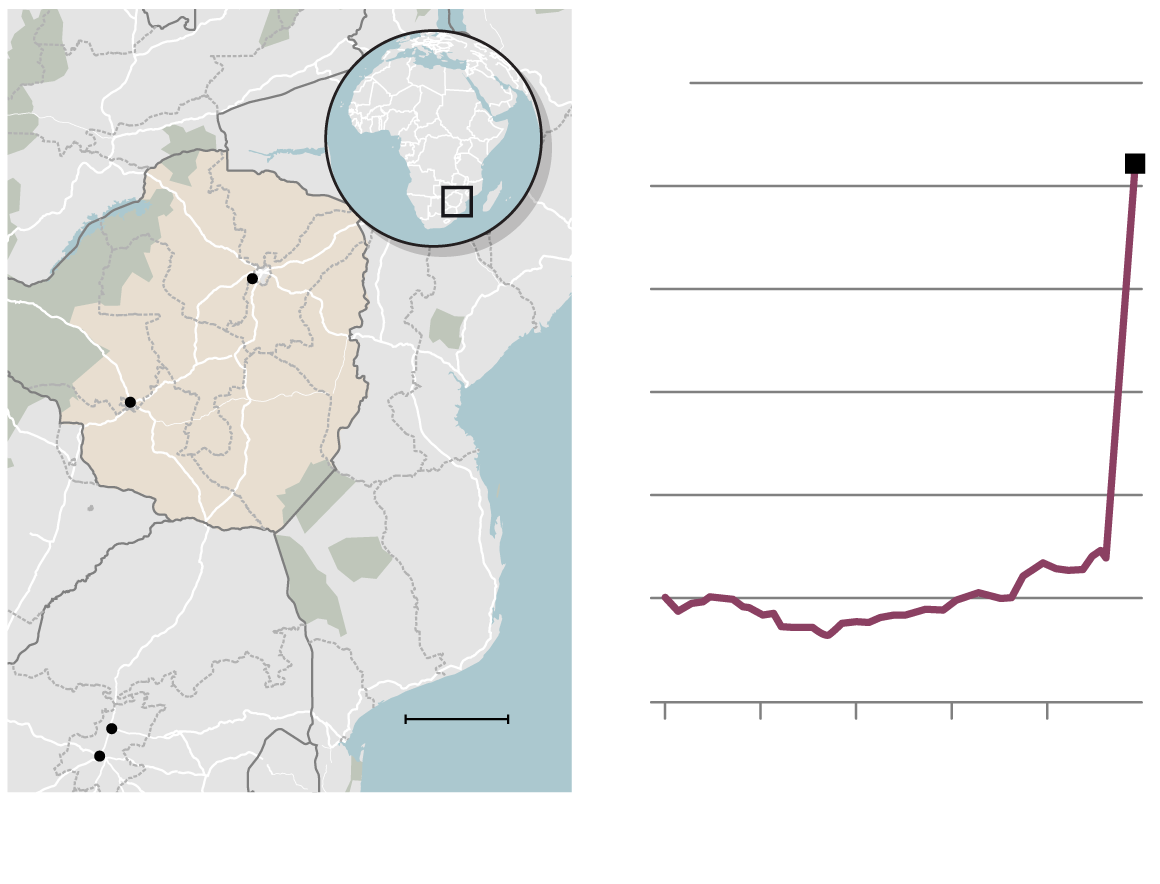 Dr. Matara’s organization, the Zimbabwe Association of Doctors for Human Rights, says it has recorded 12 deaths and 316 injuries since the military and police launched their attacks – and it believes this is only a fraction of the true number. Even after seeing atrocities in the past, many doctors were shocked by the latest injuries, which included 78 gunshot wounds, Dr. Matara said.

Zimbabwe President Emmerson Mnangagwa, who had promised a new dawn for the country after a coup that toppled his long-ruling predecessor Robert Mugabe in 2017, cut short a foreign trip and cancelled a planned visit to the World Economic Forum in Switzerland this week because of the continuing crisis.

“Violence or misconduct by our security forces is unacceptable and a betrayal of the new Zimbabwe,” Mr. Mnangagwa said on Twitter on Tuesday. “Misconduct will be investigated. If required, heads will roll.”

But despite his talk of a “new Zimbabwe,” the brutal violence of the past week is reminiscent of a similar crackdown by Mr. Mugabe’s government in 2008 when it was on the verge of losing an election. “The echoes of 2008 are very profound,” said Piers Pigou, a Southern Africa analyst at the International Crisis Group.

In some ways, the latest crackdown is worse than the violence in 2008 because now the military is quicker to use live ammunition in daytime attacks on protesters, compared with the more hidden violence of the past. In 2008, gunshot injuries were much less common than they are in the current crackdown, Mr. Pigou said. “This is much more overt and more dangerous.”

Even after Mr. Mnangagwa’s pledge that misconduct won’t be tolerated, soldiers were again rampaging in the streets of the capital, Harare, on Tuesday, detaining and beating civilians and inflicting more injuries, according to human-rights groups.

The pattern of violence shows that the military has co-ordinated its attacks, often hunting down civilians in their homes, witnesses say.

“The type of injuries that we’re seeing, and the manner in which the violations were committed, was very similar and shows a lot of premeditation,” said Edgar Munatsi, another Zimbabwean doctor who took refuge in South Africa this week after the military and police targeted activists for arrest and assault.

“In different cities, soldiers went into homes at the same time, using the same objects and instruments to assault innocent citizens,” he said. “It shows that this was very much preplanned. They knew what they were doing, and the intent was to cause harm.”

A report on Tuesday by the government-appointed Zimbabwe Human Rights Commission confirmed many of the reports by the doctors. The security forces responded to the street protests by using “brute, excessive and disproportionate force in most circumstances, thereby causing avoidable loss of life,” the commission said.

It said the police and soldiers had perpetrated systematic torture by beating men with batons while they lay on the ground.

“Their modus operandi was the same in all the communities assessed,” it said. “They would arrive at people’s houses at night or in the early hours of the day and ask all men to go outside and lie on the ground. They would then beat up all the men, including boys as young as 11 years, and then ask them to run or arrest them.”

Much of the torture and assault took place after the authorities had sought to reduce scrutiny by ordering a shutdown of internet access last week. The shutdown was finally ended by a court order on Monday.

The government has claimed that some of the violence was committed by criminals who illicitly donned the uniforms of the police or military, but few believe it. “This is state-sponsored violence,” said Dewa Mavhinga, the Southern Africa director at Human Rights Watch

“It’s clear now that this is not a reformist government, this is the same system as before.”