As Beto O’Rourke leapt onto a platform in the middle of a downtown El Paso street, Kathleen Hewtson looked up to the stage and thought: “Bobby Kennedy is back.”

Mr. O’Rourke, 46, became a Democratic star well before he officially launched his bid for president on Saturday at a rally in his native El Paso.

He grew up on the U.S.-Mexico border and is fluent in Spanish. He played in a punk-rock band and livestreams his visits to the dentist. He raised a record US$80-million in last year’s midterms when he came within 2.6 percentage points of beating Ted Cruz, nearly becoming the first Democratic Senator from Texas in 26 years.

For voters such as Ms. Hewtson, a writer who moved last month from San Francisco to nearby Las Cruces, New Mexico, Mr. O’Rourke is like the second coming of a Kennedy – someone who can beat U.S. President Donald Trump on the strength of his clean-cut good looks, boundless optimism and message of uniting a divided country.

“We have learned not to fear our differences but to respect and embrace them,” Mr. O’Rourke thundered as he bounded across the stage. “Before we are anything else, we are Americans first.”

Mr. O’Rourke is perhaps the most-watched candidate in a crowded Democratic field. The lead-up to his campaign came with a visit to Oprah Winfrey and a cover story in Vanity Fair. The massive crowds that gathered at his rallies during last year’s senate race earned the nickname “Betomania.” His presidential campaign raised US$6.1-million in its first 24 hours – surpassing more than a dozen rivals – and he sits third in the polls behind former vice-president Joe Biden, who has yet to announce his candidacy, and Vermont Senator Bernie Sanders.

“He’s charismatic. That power is God-given and he uses it well,” says Alfonso Mora, an El Paso plumber who remembers Mr. O’Rourke as a “skinny kid” playing punk rock in the city’s night clubs.

But all the attention of a presidential race has sparked a question: Can he sustain Betomania 2.0?

In a February speech in El Paso, Mr. Trump dismissed Mr. O’Rourke as “a young man who’s got very little going for himself, except he’s got a great first name.” But Mr. O’Rourke has the GOP on edge. The Republicans dismiss him “at their own peril,” former Arkansas governor Mike Huckabee told Fox News in March.

The Democrat seems to be crafting his presidential race in the same vein as his run against Mr. Cruz: offering an upbeat message of generational change to counter the anger stoked by Mr. Trump.

While some of his policies draw from progressive talking points − legalizing marijuana, banning assault weapons, debt-free college tuition, paid family leave − he often comes off as a centrist.

In El Paso, he told supporters he wants to tackle climate change, but favours investment in new technologies. He wants universal health care, but would leave private insurance intact. He supports veterans and strengthening America’s relationships with its global allies. And he touts his ability to find “Republican colleagues with whom I could walk across the aisle or drive across the country to get the job done.”

Such remarks have drawn the ire of the party’s progressive wing. Supporters of Bernie Sanders have accused Mr. O’Rourke of taking money from Texas’s oil and gas industry. They’ve also castigated him for a series of stream-of-consciousness musings on social media about a recent solo road trip, dismissing the foray as the markings of white male privilege.

Republicans, meanwhile, mock the childhood nickname Beto and refer to him by his given name of Robert Francis − a wealthy Irish-American trying to remake himself as a grassroots Latino politician.

Mr. O’Rourke’s biggest advantage may be on immigration. Coming from a working-class border city, Mr. O’Rourke favours a pathway to citizenship for some undocumented immigrants and may be the candidate with the most credibility to attack Mr. Trump on his promise to build a border wall.

On stage, he points toward El Paso’s border with Ciudad Juarez, Mexico a few blocks away, where border patrol agents have housed migrant families in tents under a bridge. “They are our fellow human beings and deserve to be treated like our fellow human beings," he said, peppering his speech with remarks in Spanish to chants of “si se puede” (“Yes you can.”)

Mr. O’Rourke’s political legacy at home, however, is mixed. While serving on El Paso’s city council, he supported a downtown revitalization project spearheaded by his father-in-law, real estate magnate Bill Sanders, that many activists considered an attempt to gentrify a Mexican-American working-class neighbourhood.

The downtown revitalization plan fizzled. But the fight has lingered on in legal battles between the city and preservationists over a historic downtown Latino neighbourhood that has been fenced off to make way for a sports arena. “If he’s so against a wall, he should also be against the wall that he helped establish and voted for,” said activist David Dorado Romo, who has been Mr. O’Rourke’s chief critic in the city.

Watching her son through throngs of supporters, Mr. O’Rourke’s mother, Melissa, brushed off the criticisms. “There’s a lot out there and most of it is not true and a lot of it is distorted,” she said. After losing the Senate race, Mr. O’Rourke took his time to weigh whether to run for president, discussing it at length with his family. “He said ‘I don’t think I have any other choice. It’s something I have to try,’ ” his mother said.

Some voters seem to be taking to Mr. O’Rourke’s centrist message. “I love Bernie Sanders as well, but I think just given where we’re at, he’s too much,” said Clarissa Zanado, 24, a psychology student at the University of Texas at El Paso. “We need to move the needle and he is trying to kick it over.”

For Ms. Hewtson, Mr. O’Rourke represents the only path for Democrats to retake the White House. “He creates emotions. He’s the only one who does,” she says. “This is it. It’s him – or it’s Trump again.”

Analysis
Democratic hopefuls for 2020 U.S. presidential election struggle to stand out from the pack
March 24, 2019 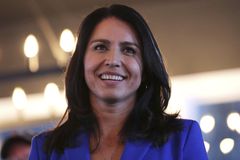 Opinion
By acting his age, Joe Biden is hurting his presidential bid before the campaign even begins
Subscriber content
March 22, 2019 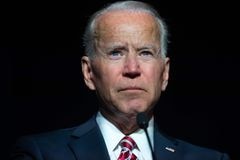 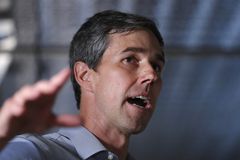