Facing escalating mass protests, the government of Lebanese Prime Minister Saad Hariri approved Monday a package of economic reforms and a 2020 budget without new taxes, hoping to appease people in the streets. Protests swelled in the hours after the announcement, however, as many demonstrators scorned the package as “empty promises.”

Hundreds of thousands of people have flooded public squares across the country in the largest protests in over 15 years, unifying an often-divided public in their revolt against status-quo leaders who have ruled for three decades and brought the economy to the brink of disaster.

Sparked by proposed new taxes, the protests have shaken the country and top leaders, who are scrambling to come up with concessions to appease the public.

Following a nearly five-hour Cabinet meeting, Hariri announced a series of economic and financial reforms which he described as a “coup,” saying no government in Lebanon’s history has taken such radical steps before.

“The decisions that we made today might not fulfill your goals, but for certain it achieves what I have been seeking for two years,” Hariri told the protesters.

“These decisions are not in exchange for anything. I am not going to ask you to stop protesting and stop expressing your anger. This is a decision that you take,” he added.

Following his speech at the presidential palace, thousands of people gathered outside his office in downtown Beirut chanting: “The people want to bring down the regime,” and “Revolution, revolution!”

The number of protesters swelled following the Cabinet announcement amid intense skepticism that the reforms amounted to anything serious. They included many young men and women as well as whole families, with children waving the national red and white flag with a cedar tree in the centre.

Layan Ajineh, who came to the protest with her two sons, ages 16 and 12, said that politicians “have not been able to adopt reforms in 30 years, so how did they come up with them in three days?”

“This is a joke. Do they think we are fools?” said the 40-year-old housewife, who said she’s worried about her sons’ future in a country where unemployment stands at more than 30 per cent.

“The people want the government to resign. People see that this government cannot be given another chance,” she said.

The protests have paralyzed the country for five days, with schools, universities, banks and other business shuttered. The protests are building on long-simmering anger at a ruling class that has divvied up power among themselves and amassed wealth for decades but has done little to fix a crumbling economy and dilapidated infrastructure.

It was not clear how the situation would move forward, especially when the main political parties have all taken the position that the government should not resign. Those include the powerful Iran-backed Hezbollah, the President Michel Aoun’s Free Patriotic Movement, Hariri’s Future Movement and Parliament speaker Nabih Berri’s Amal group. In Lebanon, the president is a Maronite Christian, the parliament speaker a Shiite while the prime minister is a Sunni. Cabinet and parliament seats are equally divided between Christians and Muslims.

It was not clear if the government will take a decision later to break the protests by force in what could lead to a violent crackdown. Hariri urged the army not to intervene with the protesters.

“If this mood prevails and protests continue at the current pace and scale, the country may be in for a prolonged period of unrest,” wrote Heiko Wimmen, of the International Crisis Group, a Brussels-based think-tank . He added that no alternative political leadership or real opposition to the ruling parties exists.

Hariri said that the Cabinet approved the 2020 budget Monday with a deficit of 0.63 per cent with no new taxes. The reforms include cutting in half the salaries of top officials including ministers and members of parliament, overhauling the electricity sector, working to scrapping the ministry of information and other public institutions and downsizing others as part of cost-cutting measures.

Hariri, when asked why people should believe the government is serious this time, said: “We should gain this confidence since people will not give it to us. If I were in their place in the street, I would not give confidence.”

He praised the protesters, saying: “What you’ve done has broken all barriers and shook all political parties.”

He added that the country’s central bank and the banking sector, which are flush with cash, will help in reducing the deficit by about $3.4-billion in 2020. The government will also study the privatization of the telecoms sector.

The banking sector was criticized by many of the protesters, who blamed it for charging the state high interest rates as it carries much of the $85-billion public debt that stands at 150 per cent of the gross domestic product. Some senior politicians are either owners or major shareholders in private banks, and Hariri said taxes will be increased on financial institutions.

The government will also distribute millions of dollars to families living in poverty and will also give $160-million as housing loans in an attempt to revive the struggling construction sector. Hariri said a law will be drafted to restore money that was usurped as a result of widespread corruption in the country.

Later Monday, President Michel Aoun signed the budget, which will be sent to parliament for discussion and approval.

Earlier, protesters closed major roads around Lebanon ahead of the emergency Cabinet meeting. Demonstrators also placed barriers across major intersections in Beirut as well as other cities and towns across the country.

These have been the largest protests since the so-called Cedar Revolution in 2005, when Lebanon witnessed a mass uprising against Syria’s occupation of the country after Damascus was blamed for the assassination of Prime Minister Rafik Hariri by a massive car bomb.

Hundreds of thousands of Lebanese flood streets in anti-corruption protest 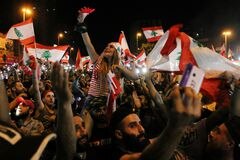 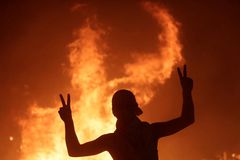 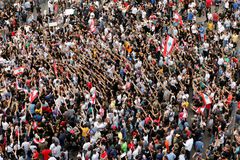