MaríA Verza
Mexico City
The Associated Press
Published May 18, 2020 Updated May 18, 2020
Comments
Text Size
Please log in to listen to this story. Also available in French and Mandarin. Log In Create Free Account

Local governments across Mexico pushed back Monday against President Andrés Manuel López Obrador’s call to reopen the economy in some 300 townships that do not have active cases of coronavirus, with leaders saying they preferred to wait until June before resuming normal activities.

Mexico, which has reported nearly 50,000 total cases and some 5,000 deaths, has seen a steep climb in new infections. Front-line doctors fear that a premature reopening could lead to a second wave of infections – a scenario that recently played out in Chile and Guatemala, where governments had to roll back reopening plans.

But López Obrador has been pressing to reactivate the economy. In addition to opening virus-free communities, his health advisers have said that the mining, construction and automotive industries could resume operations as early as Monday.

The country’s lockdown – which began in March – will remain in place, but those industries will be allowed to return to production because Mexico’s top advisory body on the pandemic, the General Health Council, had decided to classify them as “essential activities.”

“Today productive social activity has already started to open where it was agreed, and they can start classes,” López Obrador said. “We are talking about around 300 townships where there are no infections.”

A General Motors plant in the central state of Guanajuato told workers that one shift would return to operations Monday. Workers must wear masks and glasses at all times and be clean shaven.

But in most approved areas, the president’s words did not result in any changes.

In the southern state of Oaxaca, which has more than 200 of the infection-free townships, Gov. Alejandro Murat said in a video address Sunday that after consultations with other communities, officials decided to wait until June 1 to begin evaluating whether to resume economic activity.

Murat said students would not return to class Monday even in communities without confirmed cases of the virus.

Most of those communities are concentrated in the mountainous north of the state. Naturally isolated with few resources, they organized early against the pandemic.

Miriam Pascual, a human rights advocate with a non-governmental organization called Yureni, said Monday that Murat’s decision showed that indigenous communities’ strategy to fight the virus worked. Many of them sealed themselves off, not only to outsiders, but to their own residents who happened to be away at the time. They imposed curfews, and police kept people from gathering and ensured they wore masks.

“Measures that seem extreme in the city are taken here because the circumstances here are also extreme,” Pascual said from the area. “There are no doctors. To get to a basic hospital can be five hours on dirt road. And they are communities without phones, without internet, highly marginalized and discriminated against.”

The communities protected themselves because of an early information campaign that explained the virus and its dangers. The confusion started with conflicting messages from the federal government.

If the federal government tells people in these communities that things are all right, Pascual fears they will start travelling to the state capital.

“If you open it, once the (infections) start, it’s going to be catastrophic for us because the mechanisms to treat a case of COVID don’t exist here,” she said.

In neighbouring Guerrero, Gov. Hector Astudillo said it remained unclear when students could return to classes.

“We are not going to return to classes on the 18th in any township, and there aren’t conditions to do it June 1 either,” he said. Guerrero had 12 townships on the federal government’s approved list, but Astudillo said that really it was 10, because two were adjacent to communities in Oaxaca with confirmed cases.

The state’s mining and construction sectors were also preparing for a June 1 start, Astudillo said.

At least some townships that were approved to restart activities in the southern state of Chiapas also decided to wait to open schools. But there was notably more traffic in the streets in some of those communities.

The western state of Jalisco also kept schools closed in its approved communities but allowed work to resume in some sectors of the economy.

Gov. Enrique Alfaro, who has publicly disagreed with some moves by federal health officials, announced that some “non-essential” businesses that do not generate crowds, as well as services like plumbing and landscaping and beauty salons would be allowed to reopen.

“Here there are not townships that open and others that don’t,” Alfaro said, noting that the issue should not be for a Mexico City bureaucrat to decide. “It’s a serious mistake this idea of opening some townships and not others. That decision isn’t going to happen in Jalisco, nor be followed.”

The northern state of Chihuahua said none of its townships on the federal government’s list would reopen because they were close to Ciudad Juárez, the sprawling border city that has been hit with the virus. Gov. Javier Corral cited the tight relationship with El Paso, Texas, and the cross-border activity it entails in saying that none of the handful of Chihuahua towns on the list would reopen yet.

The precariousness of the president’s plans was displayed Sunday night, when López Obrador’s point man on the virus, Health Undersecretary Hugo López-Gatell, said in the middle of his daily COVID-19 news conference that he was removing a township from the list.

During the presentation, he had received word from Guerrero’s health secretary that one of the approved communities now had an infection, he said.

By the end of his news conference, a reporter alerted him to another community in Oaxaca that may have to be removed from the list. He said it was going to be a dynamic situation.

“If this happens tomorrow, it will be suspended where cases are detected,” López-Gatell said. 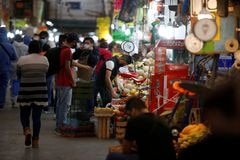 Infections soar as Mexico moves toward restarting economy
May 15, 2020 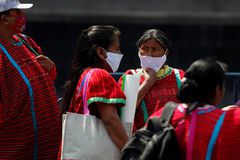 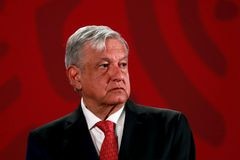