A protest movement that was ignited by a horrific video of police violence – a white police officer pressing his knee against the neck of George Floyd, a black man, for nearly nine minutes – has prompted hundreds of other incidents and videos documenting violent tactics by police.

In Atlanta, a half-dozen officers have been criminally charged after bystanders tweeted footage of an abrupt attack on two college students sitting in a car during protests. In Austin, Texas, a 20-year-old protester shot in the head by police officers aiming at someone else with what’s described as nonlethal beanbag ammunition was left with a fractured skull and brain damage. Video shows volunteers being shot, too, as they carry him off.

In California, an officer sitting in a police car in Vallejo shot and killed a 22-year-old man who was on his knees with his hands up. Only later did police discover that the man, who was suspected of trying to loot a Walgreens, had a hammer in his sweatshirt pocket, not a gun. The family’s lawyer says he has requested the videotape from body and store cameras, but police have not yet released them.

In Fort Lauderdale, Florida, Miami Herald reporters filmed officers who were shooting a nonviolent protester in the head with foam rubber bullets, fracturing her eye socket and leaving her screaming and bloody. In Kansas City, Missouri, police walked onto a sidewalk to use pepper spray on protesters yelling at them.

In Buffalo, New York, a video from WBFO, the local National Public Radio station, on Thursday showed police officers in riot gear shoving a 75-year-old man to the ground and walking away as he lay unconscious on the sidewalk, blood coming out of his ear.

A compilation of videotaped incidents posted on Twitter by a North Carolina lawyer stood at more than 300 clips by Friday morning.

The episodes have occurred in cities large and small, in the heat of mass protests and in their quiet aftermath. Some have occurred when the police confronted people who were suspected of looting. Experts on policing said that the videos showed, in many cases, examples of abrupt escalation on the part of law enforcement that was difficult to justify.

“It feels like the police are being challenged in ways that they haven’t been challenged in some time,” said Chuck Wexler, the executive director of the Police Executive Research Forum. “They are responding. And sometimes, that response is totally inappropriate.”

Ed Obayashi, a California-based expert on the use of force by law enforcement, said the incidents, while often disturbing, were an overall improvement on past police conduct during episodes of unrest.

A lawyer who advises the California Association of Police Training Officers on use of force, Obayashi said that, considering the level of chaos across the nation, “from my standpoint, there’s been considerable restraint.”

The Los Angeles riots in 1992, he said, left more than 50 people dead and more than 1,000 injured just in that city. These protests have been national, involving thousands of officers and demonstrators in scores of cities, with far fewer deaths or injuries to civilians, and several have resulted in arrests, firings or internal investigations of officers.

“I’m seeing, consistently, a command and control system in place in many of these police departments and much better training,” he said. “In years past, you’d have officers going this way and that way with no organization. It was just everyone for himself and ‘who can I catch?’”

Those improvements, however, have not necessarily changed the culture of rank-and-file law enforcement, said John Burris, a long-time civil rights lawyer in Oakland, California, who in 1994 helped represent Rodney King against the Los Angeles Police Department.

“From what I can see, for most of them, this is still just a moment to get through, like Ferguson,” said Burris, who is representing the family of the unarmed man shot Tuesday just after midnight in a Vallejo parking lot. That shooting, he noted, was only the most recent for a department that, despite hiring a new chief last year, has had a long history of police abuse accusations.

“We’re seeing a lot of bad conduct by police officers throughout the nation,” Burris said. “And none of it suggests to me that they appreciate the rage people are feeling as a consequence of long-standing police brutality that has taken place in the African American and Hispanic communities.”

One difference is that, in a number of cases, police departments are disciplining officers for their actions.

For example, after footage of the Buffalo incident went viral, the department suspended two officers and launched an internal affairs investigation.

The U.S. Park Police said two officers were assigned to administrative duties after assaulting an Australian news crew in Lafayette Square in Washington on Monday. In Sacramento, police opened a use-of-force investigation after bystanders videotaped officers using an apparent chokehold to subdue a person suspected of looting after demonstrations late Sunday night.

In Atlanta, where a group of police officers Saturday yanked two students out of a car and set upon them with a Taser, two officers were immediately fired. Criminal charges were filed this week against all six – the product, the police chief said, of “a tsunami of political jockeying.”

“We understand that our officers are working very long hours under an enormous amount of stress,” said Mayor Keisha Lance Bottoms. “But we also understand that the use of excessive force is never acceptable.”

After a police officer in Houston on a horse ran over a woman who had her back to the officer, knocking her to the ground, the city’s mayor, Sylvester Turner, apologized to the woman. Art Acevedo, the police chief, suggested that the officer could have been distracted by protesters in the crowd throwing rocks and bottles.

The police chief in Austin, Texas, Brian Manley, also apologized after injuries to protesters in that city, including to Justin Howell, 20, who was badly hurt by a beanbag round after a person next to him hurled a water bottle at the police.

Injuring the public “is not what we set out to do as a police department,” Manley said Monday.

Howell’s mother, Myra Howell, said Thursday that her son, who was about to start his junior year in college, was “doing better” from his injuries, but “it’s day by day.”

The Austin City Council on Thursday opened a two-day review of police handling of protests over the weekend, with several members expressing outrage over the police use of “less-lethal” munitions that injured four demonstrators, including Howell.

“People shouldn’t be in a hospital for attending a demonstration,” said Greg Casar, a council member, who called for a “transformational” change in policing “from top to bottom.”

Some videos have displayed a more empathetic response, like one that showed officers dancing with protesters in Lincoln, Nebraska.

But in many cellphone videos that have proliferated on social media, officers often appear to be unapologetic for rough treatment of demonstrators. “Don’t kill ‘em, but hit ‘em hard,” a state trooper in riot gear exhorts in video posted this week during protests in Seattle.

Even medical personnel trying to provide care for protesters have reported being targeted by law enforcement. When Geoff Markowitz was working as a medic last weekend at a protest in Denver, he was surprised when rubber bullets were fired in his direction. Markowitz, a third-year medical student, was tending to a protester who had been hit in the temple by a foam bullet fired by the Denver Police Department.

Markowitz estimated that he was tear-gassed more than a dozen times, even though he was only approaching if someone was seriously injured and needed to be moved.

“I believe that it is wrong to target medical professionals attempting to render aid,” he said.

The American Civil Liberties Union has responded to police tactics with lawsuits: After journalists were attacked by the police during protests in Minneapolis, the organization sued the city of Minneapolis, accusing it of abridging the constitutionally mandated freedom of the press. On Thursday, the ACLU filed a lawsuit against President Donald Trump and Attorney General William Barr on behalf of Black Lives Matter D.C. and protesters who were in Lafayette Park in Washington on Monday, saying that the police firing tear gas at peaceful protesters violated their constitutional rights.

The emergence of videos from demonstrations has brought other episodes to light that might have otherwise been overlooked. In one video taken Sunday in Chicago, police officers surrounded a car in a parking lot and forcibly pulled out people inside. The women who were in the car told Block Club Chicago they were simply trying to purchase items at a store and realized that it was closed when the police pounced.

Mayor Lori Lightfoot, who ran for office promising to reform the Police Department, said there would be an investigation.

“If any wrongdoing is discovered, officers will be held accountable,” Lightfoot said in a statement. Kim Foxx, the Cook County state’s attorney, said she would conduct an independent investigation. 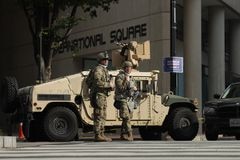 Two police officers in Buffalo, N.Y. suspended after video shows them shoving 75-year-old man to ground
June 5, 2020
Opinion
Are we ready to talk about defunding the police?
June 4, 2020 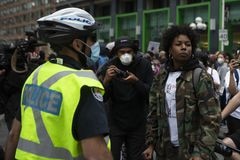