Dr. Alan Rabson, who helped define the field of cancer pathology, who figured out why shingles and recurrent cold sores occur and who helped lead the National Cancer Institute into new eras over several decades, died on July 4 in Skillman, N.J. He was 92.

The cause was complications of vascular disease, his son, Dr. Arnold . Rabson, said.

In addition to his scientific and administrative achievements, colleagues say, what made Dr. Rabson stand out were his kindness, his empathy, his geniality and his willingness to help anyone with a cancer diagnosis who was seeking advice or a referral to an oncologist.

“You could not be in his presence without smiling,” said Dr. Francis Collins, director of the National Institutes of Health, of which the National Cancer Institute is part. Dr. Rabson made his mark as a cancer pathologist in the 1950s. “He taught generations of pathologists to look into a microscope and tell if what they were looking at was cancer,” Dr. Collins said. “He created a field of excellence.”

He also studied viruses and their role in causing cancer, an area of intense interest in the 1950s and 60s. Around that time, he figured out that herpes viruses – which, depending on the variety, can cause chickenpox or cold sores – can hide in nerves after the initial infection is gone. The chickenpox virus can emerge decades later in the form of shingles, an excruciatingly painful rash. The cold sore type can periodically re-emerge, causing recurrent sores.

For most of his life, Dr. Rabson was an administrator, serving as director of what is now known as the Division of Cancer Biology at the National Cancer Institute, in Bethesda, Md., from 1975 until 1995, then as deputy director of the institute itself from 1995 until his retirement in 2015.

As a sideline, Dr. Rabson helped cancer patients who needed advice or a referral, at no charge.

Starting in the late 1950s, word got out that if you had cancer and needed help, all you had to do was call Al Rabson. He would take calls from anyone, whether they were members of Congress, celebrities or taxi drivers. He would answer their questions, counsel them and give referrals.

“People would call me and say: ‘Hey, I know you are a doctor at the National Institutes of Health. Do you know somebody who could help me?’” Dr. Collins recalled. “I would say, ‘I know exactly the right person.’”

In addition to his son, who is director of the Child Health Institute of New Jersey and professor of molecular genetics and microbiology at the Robert Wood Johnson Medical School in New Jersey, Dr. Rabson leaves a granddaughter and two great-grandsons.

He was born Alan Saul Rabinowitz in Brooklyn on July 1, 1926, and grew up in Jamaica, Queens. His parents, Abraham and Florence Rabinowitz, owned a candy store.

After high school, Dr. Rabson went to Rochester University, where he did biology research. He then applied to medical schools. All but one – the Long Island College of Medicine, now SUNY Downstate – rejected him because they had already filled their quotas of Jews, Arnold Rabson said. The Long Island College had just gotten started and still had some slots open.

There, he made it his goal to become a pathologist. He also wound up marrying one, Dr. Ruth Kirschstein. The two “were the original power couple,” said Dr. Douglas Lowy, deputy director of the National Cancer Institute.

It was a difficult time for women in science, especially Jewish women, who faced both gender bias and anti-Semitism. As Dr. Rabson travelled, establishing his career, “she was always the trailing spouse,” their son said.

In 1955, Dr. Rabson arrived as a pathology anatomy resident at the National Institutes of Health, where he did research in pathology. Dr. Kirschstein arrived as a clinical pathology resident and developed a safety test for the polio vaccine.

Dr. Rabson and Dr. Kirschstein lived in a modest home on the campus of the institutes and rarely left, Dr. Collins said. Dr. Rabson remained there after Dr. Kirschstein died of cancer in 2009, and did not leave until about three years ago, when, disabled by arthritis and vascular disease, he moved to an assisted-living facility near his son.

“They both inspired me to become a physician and, even more specifically, a physician who does research,” Arnold Rabson said. Science, he said, “was what was talked about at the dinner table.”

“We would read genetics textbooks at night,” he continued. “I was looking through a microscope when I was 14 or 15.”

And, of course, there were those phone calls and e-mails from people seeking help.

“Every evening he would be on the phone” talking to desperate patients, the son said.

In one of their many conversations, Dr. Collins said, Dr. Rabson told him, “This is why I went into medicine – to help people.” 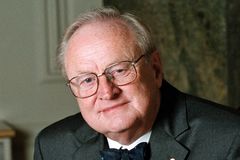 Josef Kates, 97, was a visionary scientist who believed computers ‘could do everything’
July 6, 2018
Report an error
Due to technical reasons, we have temporarily removed commenting from our articles. We hope to have this fixed soon. Thank you for your patience. If you are looking to give feedback on our new site, please send it along to feedback@globeandmail.com. If you want to write a letter to the editor, please forward to letters@globeandmail.com.
Comments