The Saudi-led coalition fighting Iran-backed rebels in Yemen said Sunday that it had launched a new air campaign on the country’s capital and other provinces, in retaliation for missile and drone attacks on Saudi Arabia.

“The targeting of civilians and civilian facilities is a red line,” Col. Turki al-Maliki, a spokesman for the coalition, was quoted as saying by the official Saudi Press Agency.

It was the first time in months that Sanaa was bombed by Saudi warplanes, an escalation that comes as the kingdom grapples with a major increase in cross-border strikes on its own infrastructure, including an attack on a major offshore oil loading facility late Sunday.

The wave of Saudi bombings on Houthi rebel sites also represents the first since President Joe Biden’s long-awaited announcement last month that he was ending U.S. support for the Saudi-led war in Yemen, including some arms sales to the country.

Residents in Sanaa, Yemen’s rebel-held capital, reported hearing huge explosions as a round of bombs fell on the city on Sunday. There were no immediate reports of casualties.

The Houthi-run al-Masirah satellite TV channel reported at least seven air strikes on the Sanaa districts of Attan and al-Nahda. Al-Masirah did not say what facilities were hit by the coalition, but smoke was seen rising over military camps in the areas. The channel also reported an air strike in the district of Bajil, in the province of Hodeida.

In announcing its new air campaign, the coalition claimed the Houthi attacks have been encouraged by a Biden administration decision to remove them form the U.S.’s terror list. The designation of the Houthis as a terrorist organization was announced in the waning days of former president Donald Trump’s administration, and caused widespread outcry from the United Nations and humanitarian groups working in Yemen.

While the Houthi attacks rarely cause damage or casualties, strikes on major oil facilities in Saudi Arabia, the world’s largest oil exporter, have shaken energy markets and the world economy. The strikes have increased in frequency and precision in recent weeks, raising concerns about Saudi Arabia’s air defences and the expanding capabilities of the Iran-backed rebels across the border.

The official Saudi Press Agency quoted an anonymous official in the Ministry of Energy as saying that a drone flying in from the sea struck one of the oil storage sites in Ras Tunura, the port run by Saudi Arabia’s state oil company, Aramco.

It claimed the strike did not cause any damage at the facility. Saudi Aramco, the kingdom’s oil giant that now has a sliver of its worth traded publicly on the stock market, did not immediately respond to a request for comment.

The Ministry of Energy denounced the strike as “an act of sabotage” targeting not only Saudi Arabia “but also the security and stability of energy supplies to the world.”

Shrapnel from an intercepted ballistic missile launched by the Houthis also rained down on a compound in the eastern Saudi city of Dhahran, where thousands of Aramco employees and their families live, SPA added. There were no immediate reports of casualties.

Residents reported hearing explosions rock cities across the kingdom – from the western port city of Jiddah to the eastern province of Damman. U.S. diplomats in Saudi Arabia issued warnings to Americans in the country, urging them to “stay alert in case of additional future attacks.”

The coalition said it intercepted and destroyed at least 12 explosives-laden drones and two ballistic missiles the rebels fired on Sunday at Saudi Arabia, including some attacks near Jiddah’s King Abdulaziz International Airport that halted air traffic for nine hours.

Separately, Yehia Sarie, a Houthi military spokesman, said that their air defences on Sunday downed a Turkish-made drone launched by Saudi Arabia’s air force over the northern province of Jawf. There was no acknowledgment from Saudi Arabia, and the rebels did not provide evidence to support their claim.

The coalition air strikes on Sanaa also come as the Houthis escalate their weeks-long offensive on the central province of Marib, an attempt to wrest the oil-rich area from the internationally recognized government.

Elsewhere in Yemen, raging battles have taken a heavy toll on civilians. In the country’s third-largest city of Taiz, the Medecins Sans Frontieres charity, or MSF, reported it had treated over two dozen people wounded in last weeks’ clashes. Its medical centre, al-Thawra Hospital, came under heavy gunfire, an attack that wounded at least three, including a health care worker and a 12-year-old boy.

Artillery also hit a residential area in Taiz Sunday, wounding seven children as they left their school, charity Save the Children said, just days after three children were killed and 10 others wounded when shells hit their homes in the same area.

“This is devastating news. We are witnessing another unacceptable increase in civilian casualties in the city of Taiz,” said Xavier Joubert, the group’s Yemen director.

The conflict in Yemen erupted nearly six years ago, after the Houthis swept into the capital and seized much of the country’s north. A Saudi-led military coalition launched a bombing campaign to dislodge the Houthis and restore the internationally recognized government.

The stalemated war has killed around 130,000 people, including more than 12,000 civilians, pushed millions to the brink of famine and spawned the world’s worst humanitarian crisis. Saudi Arabia has faced widespread international criticism for its air strikes that have killed civilians and hit non-military targets in Yemen. 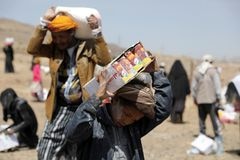 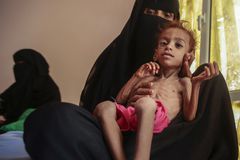 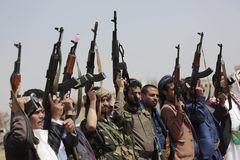