Turkey launched air strikes, fired artillery and began a ground offensive against Kurdish fighters in northern Syria on Wednesday after U.S. troops pulled back from the area, paving the way for an assault on forces that have long been allied with the United States.

Turkish President Recep Tayyip Erdogan announced the start of the campaign, which followed the abrupt decision Sunday by U.S. President Donald Trump to essentially abandon the Syrian Kurdish fighters, leaving them vulnerable to a Turkish offensive that was widely condemned around the world.

The decision was a major shift in U.S. policy and drew oppositions from all sides at home. It also marked a stark change in rhetoric by Mr. Trump, who during a news conference in New York last year vowed to stand by the Kurds, who have been the United States’ only allies in Syria fighting the Islamic State group. Mr. Trump said at the time that the Kurds “fought with us” and “died with us,” and insisted that the United States would never forget.

After Mr. Erdogan announced the offensive, Mr. Trump called the operation “a bad idea.” Later Wednesday, he said he didn’t want to be involved in “endless, senseless wars.”

In northern Syria, residents of the borders areas were in a panic and got out on foot, in cars and with rickshaws piled with mattresses and a few belongings. It was a wrenchingly familiar scenario for the many who, only a few years ago, had fled the advances on their towns and villages by the Islamic State.

Plumes of smoke could be seen rising near the town of Qamishli and clashes continued late Wednesday amid intense shelling as Turkey struck at least six different border towns along a 300-kilometre stretch. At least seven civilians and three members of the Kurdish-led force known as the Syrian Democratic Forces were killed in the Turkish bombardment, Kurdish activists and a Syria war monitor said.

Turkey’s campaign – in which a North Atlantic Treaty Organization member is raining down bombs on an area where hundreds of U.S. troops are stationed – drew immediate criticism and calls for restraint from Canada and Europe. In his statement, Mr. Trump emphasized that there are no American soldiers in the area under attack.

“This unilateral action risks undermining the stability of an already-fragile region, exacerbating the humanitarian situation and rolling back progress achieved by the Global Coalition Against Daesh, of which Turkey is a member,” she wrote, using an alternative name for the Islamic State.

“We call for the protection of civilians and on all parties to respect their obligations under international law, including unhindered access for humanitarian aid.”

Canadian Armed Forces troops used to train Kurdish security forces in neighbouring Iraq, but have since shifted focus to leading the NATO training mission for Iraqi state security forces, a commitment that extends to 2021.

Turkey’s Mr. Erdogan said on Twitter: “Our mission is to prevent the creation of a terror corridor across our southern border, and to bring peace to the area."

He said that Turkish forces, with Ankara-backed Syrian fighters known as the Syrian National Army, had begun to eradicate what he called “the threat of terror” against Turkey.

Lawrence Martin: Donald Trump and the shredding of American diplomacy

Turkey’s military operation in northeastern Syria: A guide to the story so far

Mustafa Bali, a spokesman for the U.S.-backed Syrian Democratic Forces, said Turkish warplanes were targeting “civilian areas” in northern Syria and that shells also had fallen near a prison guarded by Kurds and holding some of the most dangerous IS militants. The AP could not verify the report independently.

In Washington, officials said two British militants believed to be part of an Islamic State group that beheaded hostages and was known as “The Beatles” had been moved out of a detention centre in Syria and were in U.S. custody.

Before Turkey’s attack, Syrian Kurdish forces who control nearly 30 per cent of Syria’s territories warned of a “humanitarian catastrophe.” More than two million people live in the area impacted by the attacks, according to aid groups.

The Britain-based Syrian Observatory for Human Rights said those killed in the Turkish bombardments included two Christian Assyrians in Qamishli, a married couple and their child, a man in a village outside of the town of Tal Abyad and a child in a village west of Qamishli.

The Turkish operation meant to create a “safe zone” carries potential gains and risk for Turkey by getting even more deeply involved in the Syria war. It also would ignite new fighting in Syria’s eight-year-old war, potentially displacing hundreds of thousands.

A resident of Tal Abyad said one of the bombs hit an SDF post, and he fled with his wife and mother by car to Raqqa, nearly 100 kilometres to the south, to flee the bombing. The resident, who gave his name as Maher, said the road to Raqqa was packed with vehicles and families, some fleeing on foot “to get away from the bombing.”

“People fled and left everything behind,” he said in a text message after he reached safety.

Turkey has long threatened to attack the Kurdish fighters that Ankara considers terrorists allied with a Kurdish insurgency in Turkey. Expectations of an invasion increased after Mr. Trump’s announcement Sunday, although he also threatened to “totally destroy and obliterate” Turkey’s economy if the Turkish push went too far. 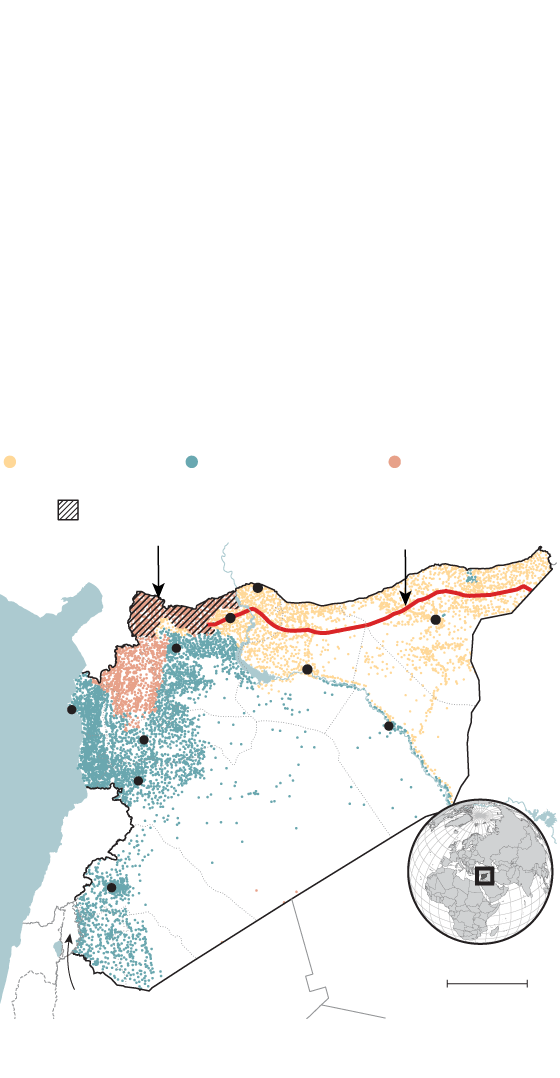 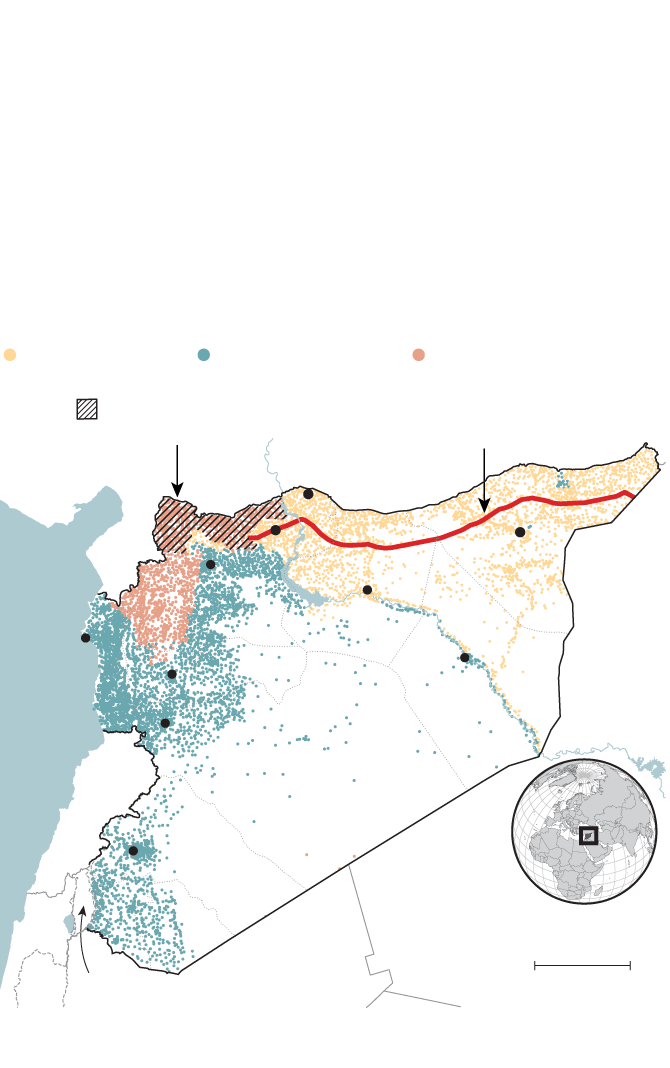 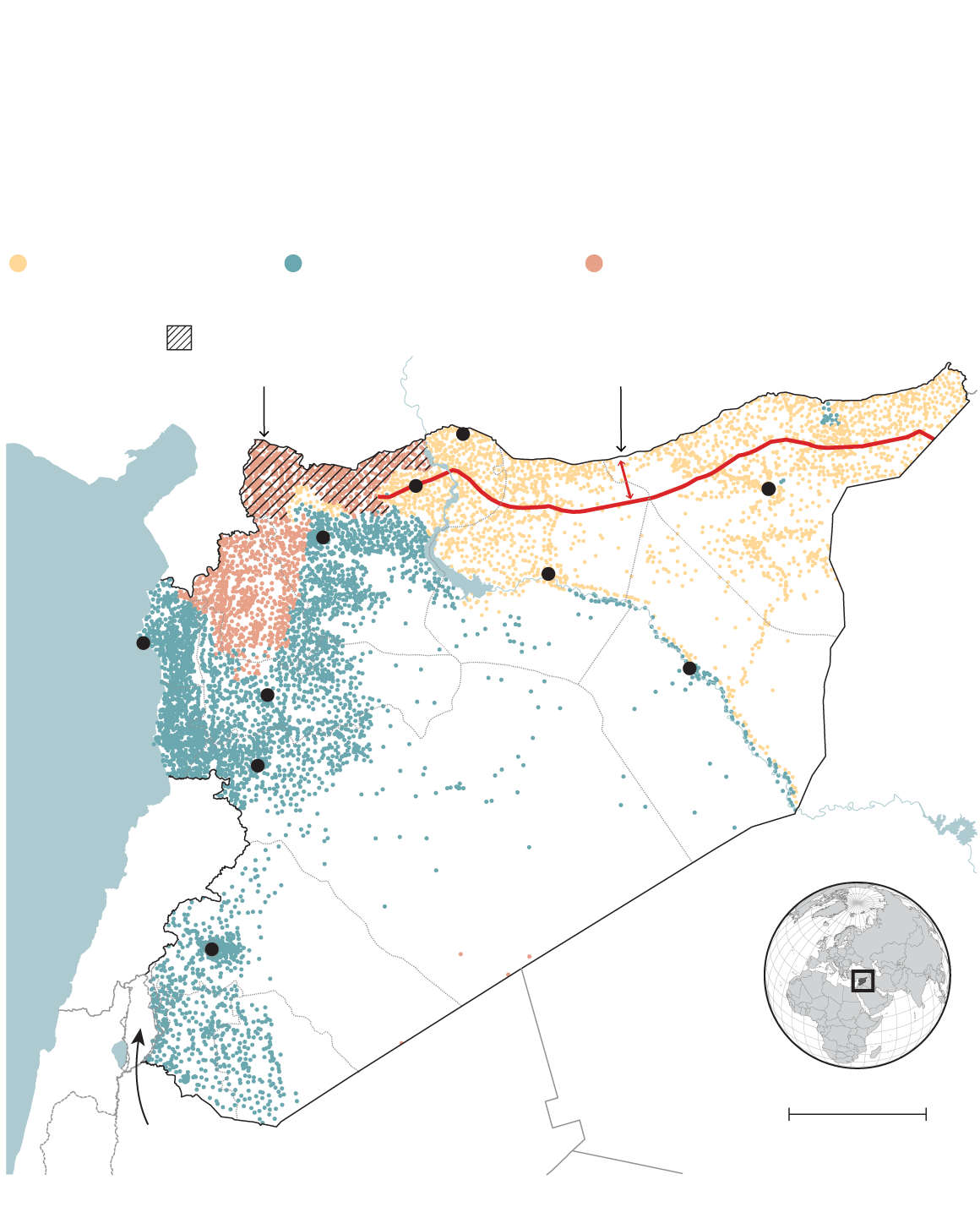 U.S. critics said he was sacrificing an ally, the Syrian Kurdish forces, and undermining Washington’s credibility. Republican Senator Lindsey Graham, a Trump ally, told Fox & Friends that if Mr. Trump “follows through with this, it would be the biggest mistake of his presidency.”

Mr. Trump later said the U.S. “does not endorse this attack and has made it clear to Turkey that this operation is a bad idea.”

Mr. Trump said he made clear from the start of his political career that “I did not want to fight these endless, senseless wars – especially those that don’t benefit the United States. Turkey has committed to protecting civilians, protecting religious minorities, including Christians, and ensuring no humanitarian crisis takes place – and we will hold them to this commitment.”

NATO Secretary-General Jens Stoltenberg, while saying that Turkey “has legitimate security concerns” after suffering “horrendous terrorist attacks” and playing host to thousands of refugees, said the country should not “further destabilize the region” with its military action in Syria.

German Foreign Minister Heiko Maas condemned the offensive, saying it will “further destabilize the region and strengthen IS.” The operation also was criticized by European Commission President Jean-Claude Juncker.

The EU is paying Turkey €6-billion ($8.8-billion) to help the country cope with almost four million Syrian refugees on its territory in exchange for stopping migrants leaving for Europe.

Turkey urged the international community to rally behind Ankara, which he said would take over the fight against the Islamic State group.

Turkey aimed to “neutralize” Syrian Kurdish militants in northeastern Syria and to “liberate the local population from the yoke of the armed thugs,” Fahrettin Altun, the Turkish presidency’s communications director, wrote in a Washington Post column published Wednesday.

Mr. Erdogan discussed the incursion by phone with Russian President Vladimir Putin. Mr. Erdogan’s office said he told Mr. Putin the military action “will contribute to the peace and stability” and allow for a political process in Syria.

In its call for a general mobilization, the local civilian Kurdish authority known as the Autonomous Administration of North and East Syria asked the global community to live up to its and asked the U.S.-led coalition to set up a no-fly zone in northeastern Syria to protect the civilian population from Turkish airstrikes.

Syria’s Foreign Ministry condemned Turkey’s plans, calling it a “blatant violation” of international law and vowing to repel an incursion.

“Such reckless attitude to this highly sensitive subject can set fire to the entire region, and we have to avoid it at any cost,” he said in Kazakhstan.

Earlier Wednesday, three IS militants targeted the Kurdish-led Syrian Democratic Forces in Raqqa, once the de facto IS capital at the height of the militants’ power. An activist collective in Raqqa reported an exchange of fire and an explosion; the Observatory said two IS fighters engaged in a shootout before blowing themselves up.

IS claimed responsibility, saying one of its members killed or wounded 13 SDF members.

The SDF, which holds thousands of IS fighters in detention facilities in northeastern Syria, has warned that a Turkish incursion might lead to the resurgence of the extremists. The U.S.-allied Kurdish-led force captured the last IS area controlled by the militants in eastern Syria in March. 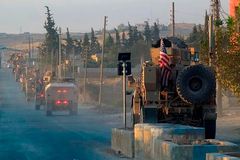 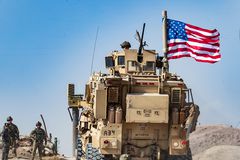