All that’s clear, for now, about Volodymyr Zelensky, the comedian who is president-elect of Ukraine, is the size of his mandate. After his thumping win in Sunday’s election, Ukrainians, as well as the country’s neighbours, are waiting to see what Mr. Zelensky – who played a fictional president of Ukraine on television for three seasons – will do in real life.

Remarkably for a politician anywhere, he comes to office almost completely unburdened by commitments made on the campaign trail. While hammering away at the unpopular incumbent, Petro Poroshenko, Mr. Zelensky made only the vaguest of statements about what he would do if he had Mr. Poroshenko’s job.

Now that life is imitating art and Mr. Zelensky is set to become the leader of a country that is the front line of a confrontation between Russia and the West, the details of his plan – if he has one – will need to be quickly filled in.

There are high hopes, particularly among other anti-establishment politicians, that Mr. Zelensky – who has said he will consult with citizens about the problems they want his government to tackle then crowdsource the solutions – will shake up the region’s often-staid politics. But there are also deep concerns about who will be writing his scripts once he’s in power.

Western diplomats and business people, as well as officials in the outgoing government, told The Globe and Mail during the campaign that they were worried Mr. Zelensky would pull Ukraine off its pro-Western course in favour of closer relations with Moscow. Mr. Poroshenko helped advance that narrative with a series of bitter tweets Sunday night shortly after the scale of his defeat became clear.

“Just look at the celebrations in the Kremlin,” he wrote. “They believe that with a new inexperienced Ukrainian President Ukraine could be quickly returned to Russia’s orbit of influence.”

But while there’s little doubt that Russian President Vladimir Putin will be glad to see the ouster of Mr. Poroshenko – who helped hold Ukraine together after Russia annexed Crimea and stirred up a separatist rebellion in the Donbass region, rallying international support for punitive sanctions against Moscow – any victory parties in the Kremlin after Mr. Zelensky’s win were muted.

On Monday, Russian Prime Minister Dmitry Medvedev cautiously welcomed the election result, posting on his own Twitter account that “there is still a chance for Ukraine to improve its relations with Russia.” But Mr. Putin, who directly manages sensitive foreign files such as Ukraine, was silent, withholding official congratulations even as Mr. Zelensky took a phone call from U.S. President Donald Trump and received an invitation to visit Berlin from German Chancellor Angela Merkel. (In a statement, Prime Minister Justin Trudeau said he looked forward to working with Mr. Zelensky in order to deepen the Canada-Ukraine relationship and "build a more secure, more prosperous future for people in both our countries.”)

“It is too early to talk about President Putin offering his congratulations to Zelensky, as well as speaking about the possibilities of working together,” Mr. Putin’s spokesman, Dmitry Peskov, told reporters in Moscow. The Kremlin, Mr. Peskov made clear, was in wait-and-see mode regarding the president-elect. “It will only be possible to judge [him] by his actions.”

While Mr. Zelensky did take a more conciliatory line toward Russia than Mr. Poroshenko did during the campaign – saying he hoped to end the war in Donbass through a negotiated settlement with Mr. Putin, suggesting a willingness to consider a compromise over the status of Crimea and Donbass – it’s far from clear that he will bend to the Kremlin’s will.

If he is indeed a puppet – as some allege – the hand manipulating him is not Mr. Putin’s but that of Ihor Kolomoisky, a powerful Ukrainian oligarch. And while Mr. Kolomoisky’s aims may have coincided with those of Mr. Putin, in that they both wanted to be rid of Mr. Poroshenko (who ordered the seizure and nationalization of Ukraine’s largest bank amid accusations of fraud and mismanagement while it was owned by Mr. Kolomoisky), the oligarch also fought ferociously against Russian interference during the events of 2014, forming and funding a battalion of fighters that helped stop the separatist advance in eastern Ukraine.

Among the few hard commitments Mr. Zelensky did make on the campaign trail were promises to continue Ukraine’s drive for membership in the European Union and NATO, policies that are directly at odds with Mr. Putin’s ambition to pull Ukraine back into Russia’s sphere of influence.

But perhaps the most threatening thing of all about Mr. Zelensky, from the Kremlin’s point of view, is the size and nature of his election win. Mr. Putin, whose inner circle is also accused of massive corruption, will see little to admire in a political neophyte who comes from nowhere to upend the establishment.

Monday’s official count of the ballots confirmed the predictions of exit polls taken during the voting on Sunday, with Mr. Zelensky taking more than 73 per cent of the vote. Even more impressively, he claimed a majority in all but one of Ukraine’s 23 oblasts, or regions, where voting took place, winning over both the predominantly Russian-speaking east of the country and the Ukrainian-speaking west.

The campaign, which included an unpredictable first round that saw a field of 39 candidates narrowed down to Mr. Zelensky and Mr. Poroshenko after a first-round vote on March 31, as well as a head-to-head debate between the two finalists in the final days, was a breath of fresh air compared with the stagnant political scene in Moscow.

Alexey Navalny, the most prominent member of Russia’s anti-Putin opposition, congratulated Ukraine for holding “honest elections – a rare thing in the territory of the former Soviet Union. Let Ukraine thrive, and Russia will be OK.”

In his acceptance speech Sunday night, Mr. Zelensky also suggested that Ukraine’s election could set an example for some of its neighbours. “To all post-Soviet countries: Look at us. Everything is possible.” 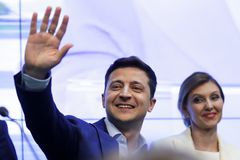 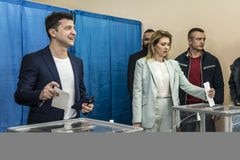