Washington’s bitterly divided leaders came together on Friday to praise the late Senator John McCain as an embodiment of America’s fighting spirit, idealism and sense of humor, but there was one notable absentee: President Donald Trump.

At a Capitol Rotunda ceremony, Republicans and Democrats called a temporary political truce to honor McCain on the third of five days of memorial celebrations in Arizona and Washington for the Vietnam War hero and two-time Republican presidential candidate.

“He would fight tooth and nail for his vision of the common good. Depending on the issue, you knew John would either be your staunchest ally or your most stubborn opponent,” said Senate Republican leader Mitch McConnell, who frequently clashed with McCain on issues such as healthcare and campaign finance reform.

“He had America’s fighting spirit, our noble idealism, our solemn patriotism, and our slightly irreverent streak -- all rolled into one,” McConnell said.

The absence of Trump - who on Friday will travel to one of his private golf clubs for a campaign fundraiser - reflected the animosity between the two men that lingered even after McCain’s death on Saturday from brain cancer.

Vice President Mike Pence told mourners Trump had asked him to attend to pay his respects.

“He will be missed. As President Trump said yesterday, we respect his service to the country,” Pence said.

Trump will also miss Saturday’s service at the Washington National Cathedral, where former President Barack Obama, the Democrat who defeated McCain in 2008, and former Republican President George W. Bush, who beat McCain in their party’s 2000 presidential nominating contest, will pay tribute to McCain.

House Speaker Paul Ryan said he was sometimes on the receiving end of McCain’s “distinct brand of candor” and said the late senator relished a good fight.

“This is one of the bravest souls our nation has ever produced,” Ryan said.

After the ceremony, McCain’s family and those in attendance filed past the coffin, which sat atop a pine board catafalque originally built in 1865 for President Abraham Lincoln’s casket.

Hundreds of mourners, who had lined up outside the Capitol to await their chance to pass through the Rotunda and pay their respects, began filing past in the afternoon.

“This is kind of like the death of an era. A man who stood up for what he believed, and I can’t say I agreed with every position he took, but he did it with dignity,” said retired schoolteacher Sue Ellen Raby, 71, who traveled more than 77 miles (124 km) from her Maryland home to pay her respects.

The Trump-McCain feud dated back to at least 2015, not long after Trump kicked off his presidential campaign. McCain condemned the candidate’s hard-line rhetoric on illegal immigration, accusing Trump of “firing up the crazies.”

The New York businessman hit back, saying of McCain’s 5-1/2 years as a prisoner of war in Vietnam: “He was a war hero because he was captured. I like people who weren’t captured.” Trump received five deferments that got him out of military service.

More recently, McCain accused Trump of kowtowing to Russian President Vladimir Putin at July’s Helsinki summit, calling it “one of the most disgraceful performances by an American president in memory.”

Trump in turn delayed issuing any statement after McCain’s death. Earlier this week, the American flag atop the White House that had been at half-staff was raised back up, then lowered again after Trump drew fire from Congress and veterans.

McCain helped plan the events around his funeral. He made it clear to family and friends that he wanted Democratic former Vice President Joe Biden, Bush and Obama to speak - but that Trump was not welcome. 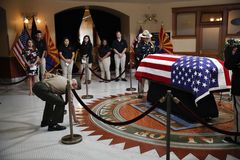 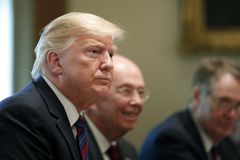