It was two days after Hurricane Michael, and Eddie Foster was pushing his mother in a wheelchair down a thoroughly smashed street, his face creased with a concentrated dose of the frustration and fear that has afflicted much of the Florida Panhandle since the brutal storm turned its coast to rubble.

He was in a working-class neighbourhood called Millville, where many residents said they were becoming desperate for even basic necessities. Foster, 60, and his 99-year-old mother had no car, no electricity. The food had spoiled in his refrigerator. The storm had ripped off large sections of his roof. He had no working plumbing to flush with. No water to drink. And as of Friday afternoon, he had seen no sign of government help.

This was the problem that government officials were racing to solve Friday, as desperation grew in and around Panama City under a burning sun. Long lines formed for gas and food, and across the battered coastline, those who were poor, trapped and isolated sent out pleas for help.

It would take time to reach everyone. Yet the Panama City area, one of those hit hardest by Hurricane Michael, grew into a whirring hive of activity on Friday, as box trucks, military personnel, and rescue and aid workers flowed in from surrounding counties and states, struggling to fix communications and electrical systems that officials said were almost totally demolished.

The death toll from the Category 4 storm rose to at least 16, stretching as far north as Virginia, where five people died, and it was expected to climb higher as search-and-rescue crews fanned out through rubble that in some cases spanned entire blocks. The toll also included the potential of millions of dollars in damage to aircraft, which were left behind during the storm at Tyndall Air Force Base.

For those waiting for relief supplies or the ability to return to their homes, Brock Long, the Federal Emergency Management Agency administrator, counselled patience. “Bottom line, it was one of the most powerful storms the country has seen since 1851,” he said. “It’s going to be a long time before they can get back.”

In Panama City, people pitched in when they could. Some even opened stores that lacked electricity: A Sonny’s barbecue restaurant fired up its smokers in the parking lot, feeding many who gathered in the late morning in a line that was at least 100 grateful residents long.

But in a city of unusable toilets and iffy cellular service – where nearly every street seemed like a set from a disaster movie – tensions were occasionally high as people waited for their first hot meal since Tuesday night. Before noon, a shouting match broke out between two men waiting for their barbecue plates. “Stop it!” a server admonished them at the top of his lungs. “Now we’re all being kind – got it?”

But the line was also full of hugs and tearful reunions, and across the broken region, residents exhibited selflessness and sweat as they began the long slog of putting it all back together. Crews had been able to clear some of the power lines and fallen trees from the main roads of Panama City, but many other areas were still choked with a riot of debris and limbs. Search-and-rescue teams continued to check neighbourhoods in coastal Bay County, and Mark Bowen, the county’s emergency services chief, said that officials had estimates of the dead, but would not release them until the work was done.

Shell-shocked residents continued to stream from their homes, mostly focused on the first steps of rebuilding – finding help, from government assistance to shelters. But for some, the search proved frustrating: Solid answers were scarce, particularly in remote parts of the Panhandle. Some turned to word-of-mouth, and that was equally unreliable.

“I just keep looking for steeples and long lines, but I haven’t found much so far,” said Lynette Cordeno, 54, a retired Army sergeant who hoped to find a meal service somewhere. “We are walking around with no internet, no cell service, no way to even ask for help.”

Cordeno had gathered with others outside the Mr. Mart convenience store in nearby Callaway, one of many stores big and small that were rumoured to be opening Friday. Some came barefoot and some in storm-battered cars. They came for room-temperature water and beer, charcoal and candy – and critical information.

“This is the working-class part of town. We didn’t have much before and now we have even less,” said Kevin Deeth, who lives four blocks away in a trailer missing jagged chunks of roof. “Now we need answers so we can try to start over.”

At his home, heaps of clothing and toys, now a sodden mess, are everywhere. Parts of the walls disintegrated, coating the living room like a first snow. Deeth saved some family photos and his children’s framed school awards, but not much else.

For now, Deeth, his wife and four school-age children are staying with a friend. He said Friday was his son’s 13th birthday, and then he began to cry.

The story and the sentiment were common, and they were not likely to abate soon. Bowen, the emergency services chief, warned Friday that the area was in for a bout of “long-term uncomfortable, so people kind of need to get into that mindset.”

Emergency planning experts said the government had not necessarily fallen short in its response so far.

“This is what disasters look like,” said W. Craig Fugate, a former FEMA chief. “Sit tight, help’s coming, but it’s not going to be there 12 hours after the storm passes.”

Likewise, those knowledgeable about disaster planning dismissed the idea that the rapid intensification of the storm had caught emergency responders off guard. Storm preparations, they said, are mostly driven by the population of a threatened region, not the precise dimensions of a storm.

“Once you get to a certain point in this part of the coast, it’s just going to be bad,” Fugate said.

Appearing Friday afternoon in Marianna, an inland community, Gov. Rick Scott of Florida said that state officials were “constantly reaching out to see what we can do to be helpful.”

“We have put out fuel, water, food in all of the impacted areas,” the governor said. “Where we can get there by truck, we’re getting there by truck.”

Officials in Panama City insisted throughout the day that crucial short-term help would soon arrive, even though the logistics, given the blocked roads and failed communications systems, were daunting. By afternoon, they had released a list of nine Bay County feeding sites.

Some local officials were worried about the possibility of social unrest in the areas where the poorest residents had not stocked up with multiple days’ worth of supplies. A short drive from Foster’s home, looting had been seen Thursday at a half-wrecked dollar store, and while some people came for things they wanted, most had come for things they needed – drinks and food.

On Friday, in a sign of the change that could soon roll out across the city, the store was being guarded by military personnel in a pair of Humvees.

Officials said that the Red Cross and religious volunteers were preparing ambitious feeding programs. The Florida National Guard was moving through neighbourhoods with food and water. Soon, officials said, the region would be dotted with canteens and “pods” to allow people to drive up for food and water.

In the meantime, with cell service and internet hovering between spotty and non-existent, residents navigated the ruined landscape with what scraps of information they could. Charlotte Jordan, 68, said that she heard about the free barbecue from her daughter, who called her from Tampa.

Elsewhere in line, Tracey Simmons, 42, was angrier. “They’re doing us like they did New Orleans,” she said. Simmons, an educator, said she was worried that poorer residents would eventually be moved out, much as they were after Hurricane Katrina. For the time being, she was frustrated by the complicated game of survival that was playing out.

“We know that people are coming,” she said of relief crews, “but where are they?”

Radio personalities played an important role in filling the gap – for those who had radios. One station broadcast a sort of improvised community bulletin board, reading out listeners’ news of store openings, offers of help, people in trouble, and people exasperated:

“In the city of Fountain, Fla., can someone get water and formula to a baby?”

“My grandmother needs her meds and she needs her road cleared.”

“We should sue the cellphone companies.”

“You have to be patient, folks,” the host, Shane Collins, advised at one point. “We have been through a major disaster and it takes time.”

It came as a relief to many when a Sam’s Club opened Friday morning, under the watchful eye of National Guard troops. But like so much here, it was also a pain: On one side of the massive building, a two-hour line of sweaty shoppers pushing empty carts snaked through the parking lot. The shoppers were allowed in about 10 at a time, and had few fresh goods to choose from. Most walked out with cases of bottled water, snack food, and the occasional generator.

On the other side, the line for gas was even longer.

“I’m angry,” said Michael Chism, 30, on his third hour of waiting to fill up. “But there ain’t nothing I can do about it.” 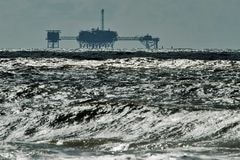 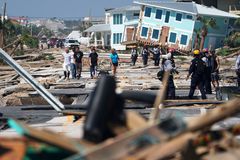