Pete Buttigieg and Bernie Sanders vaulted to the top of the Democratic presidential race Tuesday, with Joe Biden headed toward a disappointing finish as Iowa party officials released partial results from a caucus marred by a buggy new smartphone app.

With 62 per cent of precincts in the state reporting results, Mr. Buttigieg, the former mayor of South Bend, Ind., was set to capture the largest share of delegates, at 26.9 per cent. Mr. Sanders, a Vermont senator, was on track to win the popular vote and was closely trailing Mr. Buttigieg in the delegate count, capturing 25.1 per cent of the state’s delegates.

Mr. Biden, the former vice-president, was headed for a fourth-place finish with 15.6 per cent of delegates, behind Massachusetts Senator Elizabeth Warren at 18.3 per cent. None of the other candidates was set to reach the 15 per cent needed to qualify for delegates to the Democratic Party’s nominating convention in the summer, although the race in Iowa remained fluid, with results from more than a third of the precincts still unavailable Tuesday.

Despite the uncertainty, Mr. Buttigieg declared victory. “A campaign that some said should have no business even making this attempt has taken its place at the front of this race,” he told his supporters Tuesday afternoon.

Sanders campaign adviser Jeff Weaver thanked Iowans in a statement. "We are gratified that in the partial data released so far it’s clear that in the first and second round more people voted for Bernie than any other candidate in the field.”

Representatives from Mr. Biden’s campaign sent a letter to Iowa caucus organizers asking for “full explanations and relevant information regarding the methods of quality control you are employing.”

The first caucuses of the 2020 presidential race were plagued by technological problems that delayed the results for nearly an entire day, leaving the race up in the air ahead of next week’s New Hampshire primary.

The debacle, which played out live on national television, revived calls for Iowa to lose its status as the first to vote and to reform its caucus process. The mobile app was being used for the first time in Monday’s caucuses. It was designed to allow officials at the nearly 1,700 caucus locations to transmit their results back to party headquarters more quickly.

But the app malfunctioned: Some party operatives couldn’t download it to their phones as intended, while others received error messages when they tried to input results. Officials reverted to phoning in their results instead, only to be left on hold for hours.

Democrats had hoped to use Iowa to start building excitement toward defeating U.S. President Donald Trump in November. Instead, the party was left trying to explain how it had failed to run an election.

Iowa Democratic Party chair Troy Price apologized for the delay Tuesday, blaming a coding error and defending the accuracy of the results. “The bottom line is we hit a stumbling block on the back end of the reporting of the data,” he told reporters. “But one thing I want you to know is we know this data is accurate.”

We sincerely regret the delay in the reporting of the results of last night’s Iowa caucuses and the uncertainty it has caused to the candidates, their campaigns, and Democratic caucus-goers.

Mr. Price did not offer a timeline for releasing the remaining results. He said the party will conduct an independent review into what went wrong.

The app by Shadow Inc. was created out of Groundbase, a platform developed for Hillary Clinton’s 2016 presidential campaign, Gerard Niemira, chief executive officer of the Denver-based app maker, wrote in a January, 2019, post on blogging website Medium.

Shadow apologized Tuesday on Twitter, saying its app had accurately collected the correct data from the caucuses, but then ran into problems transmitting results to the Democratic Party. "Importantly, this issue did not affect the underlying caucus results data,” the statement said.

Greg Wolf, a political scientist at Drake University in Des Moines, said the app failure is only the latest in a long line of technological problems in politics.

“It seems like every time a state tries to introduce new technology, it doesn’t go swimmingly well. They never really work of their first try,” Prof. Wolf said. “In light of all the criticism Iowa gets, everything had to go pretty smoothly for it to keep its status as first in the nation. This certainly doesn’t help that cause for 2024.”

The chaos in Iowa raised fears that similar problems could plague the Nevada caucuses on Feb. 22, which follow a similar format and where organizers had also promised to incorporate new app-based reporting technology this year.

In a statement Tuesday, the state party said it would not be using the same technology or app maker used in Iowa to report the results of its own caucuses.

“NV Dems can confidently say that what happened in the Iowa caucus last night will not happen in Nevada on Feb. 22,” Nevada State Democratic Party chair William McCurdy II said in a statement Tuesday. The state party had developed “a series of backups and redundant reporting systems, and are currently evaluating the best path forward.”

Jenny Murray, a captain at a rural precinct in Creston, Iowa, told The Globe and Mail the app wouldn’t allow her to transmit her results.

She resorted to reporting by telephone. Even after Ms. Murray and other officials had revealed their numbers to headquarters, the party did not immediately release them.

“Everyone called them in, but we have no results,” she said. The party on Tuesday opted to collect paper voter cards, recording the numbers of votes for each candidate at each caucus site, and manually count them, to compare with the results received by phone and some partial results registered by the app.

Paxton Farrar, another precinct captain, said the party did not appear to realize how much development and testing typically has to go into building a successful app. “It is a significant undertaking that requires a lot of iterations with a lot of people working on it,” he said. “I don’t think it was wise to put so much on this.”

Mr. Trump took to Twitter to mock his rivals. “The Democrat Caucus is an unmitigated disaster. Nothing works, just like they ran the Country,” he tweeted. “The only person that can claim a very big victory in Iowa last night is ‘Trump.’” 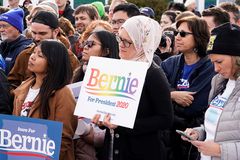 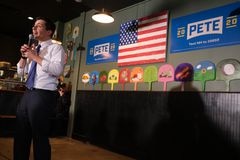