The Trump administration has reached a deal with Turkey allowing Ankara to take a swath of land in northern Syria from the U.S.’s Kurdish allies, while giving the Kurds a five-day ceasefire to escape advancing Turkish forces.

The agreement Thursday was meant to defuse mounting bipartisan anger in Washington over U.S. President Donald Trump’s go-ahead for Turkey to invade last week. But whether it will ease the humanitarian crisis in Syria or calm the waters in Washington, as Mr. Trump seeks to rally his Republican caucus in the face of an impeachment inquiry, remain open questions.

The crisis began last Sunday when, after speaking with Turkish President Recep Tayyip Erdogan, Mr. Trump announced that U.S. forces would leave the area Turkey wanted to invade and that Ankara would be given charge of ISIS fighters previously captured there.

Under the terms of the pact, Turkey will agree to a ceasefire while the YPG, a Kurdish group, retreats from a 32-kilometre strip on the Syrian side of the border. The Trump administration will ultimately lift sanctions on Ankara, including a 50-per-cent tariff on Turkish steel.

Turkey invaded Syria last week to drive Kurdish forces, which Mr. Erdogan accuses of being terrorists, out of the “safe zone” along the border. Turkey also hopes to use that zone to send back Syrian asylum seekers who have taken refuge in Turkey during Syria’s eight-year-long civil war.

U.S. Vice-President Mike Pence announced the agreement after a four-hour meeting with Mr. Erdogan at his palace.

“Today, the United States and Turkey have agreed to a ceasefire in Syria,” Mr. Pence said at a news conference in Ankara. “The Turkish side will pause Operation Peace Spring in order to allow for the withdrawal of YPG forces from the safe zone for 120 hours.”

Since Sunday, amid a swift backlash from both Democrats and Republicans, aghast that Mr. Trump would abandon the Kurds after they had done most of the serious fighting against ISIS, the President gave mixed signals. He imposed the steel tariffs on Turkey and warned Mr. Erdogan “Don’t be a fool!” in a letter. But the President also derided the Kurds, saying they were “not angels,” and that it was time for U.S. troops supporting them in Syria to “come home.”

On Thursday, Mr. Trump hailed the deal as “an incredible outcome” and said Turkey had good reasons for wanting to invade.

“You have a 22-mile strip that for many, many years, Turkey, in all fairness, they’ve had a legitimate problem with it. They’ve had terrorists. They’ve had a lot of people in there that they couldn’t have,” Mr. Trump said after landing in Texas en route to a rally. “They had to have it cleaned out.”

Critics said the agreement had given Turkey what it wanted while pushing aside an American ally.

“This is a terrible deal for the Kurds. They have not only been abandoned by the U.S. in Syria, but now the U.S. negotiated a deal with Turkey that basically forces them to leave their territory,” said Sibel Oktay, an assistant professor of political science and global studies at the University of Illinois, Springfield. “Considering how instrumental they were for the U.S. in the fight against ISIS over the past several years, the Kurds definitely deserved a better arrangement.”

Even members of Mr. Trump’s own congressional caucus pushed back.

Senator Marco Rubio tweeted that the deal would leave intact Mr. Erdogan’s goal to “rid area of Kurds,” and merely gave Kurdish people “an ultimatum, they can leave voluntarily or leave dead.” In a scathing Senate speech, Mitt Romney said Mr. Trump’s move would "stand as a bloodstain in the annals of American history.”

Mr. Trump particularly needs his caucus behind him as he faces an impeachment inquiry into accusations he solicited foreign election interference by demanding Ukraine investigate his political opponents, and froze military aid to the country to gain leverage.

And more broadly, said some critics, it would auger poorly for future U.S. efforts to lead the international community.

“This looks like a gift that’s handed to Erdogan,” said Lisel Hintz, an international relations assistant professor and expert in Turkey at Johns Hopkins University. “To treat allies like this doesn’t lead other groups to want to partner with you in the future. The U.S. has left the Kurds hanging.” 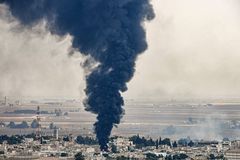