McClung was speaking metaphorically. She probably wasn’t aware that some of Massey Hall’s original stained-glass windows had been removed owing to the installation of exterior fire escapes.

Further renovations over the following years would cause more of Massey’s stunning collection of ornamental glass (which included portraits of composers from Bach to Beethoven and Schubert to Chopin) to be altered. Many would be boarded over because of noise issues. The hustle, bustle and city-street sounds were bleeding into the venue and messing with the Mendelssohn Choir’s best efforts. And, so, beautiful, jewelled panels in magenta and rose went hidden for decades.

Until now. As part of the building’s extensive renovations, 93 of the venue’s original stained-glass windows, dating back to the early 1890s, are being restored. A team of 10 glazers at EGD Glass and Vitreous Glassworks are painstakingly cleaning and fixing the decorative glass in time for the building’s reopening in 2020.

“It’s a phoenix rising out of the ashes,” says Eve Guinan, the owner of Toronto’s EGD Glass Studio. “It’s going to look fabulous.”

Guinan, a veteran restorer who trained in Britain before coming to Canada 36 years ago, consulted with Heritage Toronto for the original assessment of the Massey stained glass in 2016. Some of the windows were in such poor condition that they were taken out immediately to be stabilized. In 2017, all of the building’s stained glass was removed, documented, put into crates and sent to storage. Later Guinan and EGD Glass won the contract to restore the collection, with some of the work sub-contracted to Toronto’s Vitreous Glassworks.

The project is expected to take the 10 glazers some 18 months to restore the panels for reinstallation. Will they be better than ever? “No,” Guinan says. “It’s not our job to improve on anything. We’re conserving."

Indeed, Guinan is more than fussy when it comes to altering any of the original artwork. For example, though half of Beethoven’s face is missing on one of the dozen composer portraits, none of the original glass will be tampered with. Instead, an artist will work on a new piece of glass to be placed over top of the faded part of the original. “It’s a second skin,” she says.

According to Guinan, Massey’s original glass artwork was thoughtfully done, with a dozen unique design styles incorporated to mesh with the building’s architectural themes and colour scheme. “It must have quite stunning,” she says. And she wouldn’t change a thing. Massey Hall in photos: Why the under-renovation concert venue will always remain a vital part of Toronto’s social history
July 7, 2019 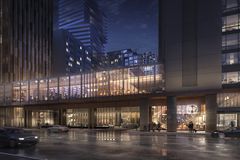