House-watching is the social trend of the spring.

Without access to human friends, people are going for long meandering walks by themselves and looking at houses. That’s it.

It sounds boring, but what else is there? Right now, you take what you can get, and in Toronto, what you get is houses.

Suddenly, since quarantine, they seem so interesting – full of charisma and personality. With everything cancelled and nowhere to go, you become a tourist in your own city, every house a Parthenon. The lemon-coloured barn; the stumpy one by the train tracks with Flintstones’ cladding; the tall brick mansion with – could it be? – a cypress tree by the door.

The typical Toronto house is skinny and close to the street, and the resulting cluster of facades becomes to the house-watcher what a subway car or a busy restaurant is to the people-watcher – providing many faces to scan and appraise. It’s refreshing, because people-watching itself is becoming a bit of a lost art these days, what with masks and sidewalk detours and staying inside. Just the idea of other people, provided by proxy through their gardens and windows, feels important for a lonely walker in a quiet city.

What you’re looking for on these walks isn’t architectural flair, but people stamping a building with something of themselves. In a stretch of identical bay-and-gable houses erected by some developer in the 1890s, you might get one with a starburst of white brick around the first-storey window, another with a trim of gingerbread woodwork over the eaves, and a third with a tulip garden showing off as many colours as a box of lipsticks.

It doesn’t matter if the personal touches are a mess. An ugly house can even be an advantage, providing more to wonder about; more for the imagination to chew on. The French writer Gustave Flaubert had a line about “the moral density that exists in certain kinds of ugliness.” When I hear that, I think of certain Toronto houses. Was that white-washed reno job previously some kind of church? Who could possibly live in the place with the turret?

More than a decade ago, the writer Mark Greif published an essay about how chasing experiences, to be stored and savoured as memories, had become the overwhelming imperative of modern life. He proposed “aestheticism” as an alternate way of being. It’s an ideology that asks you to “view every object as you would a work of art” – even ordinary ones.

“‘Look more closely’ is the basic answer of the aesthete to any failure of experience,” Greif writes. “Let the lights of a city draw your eyes like Egyptian gold.”

It turns out aestheticism works almost as well for a life stripped of experience. Try it. There are no more vacations or nights out, but the grackle at your window really glitters in the light. The vinyl siding of that house is seafoam green. Quarantine has forced us to see the world with new, hungry eyes, and you can make a mental meal out of looking at a house.

Equally important, house-watching gives a feeling of proximity to others. The half-timbered Tudor throwback with the rose bush is a compelling sight in its own way. It also lets you infer a person behind the door, and for a second feel in communion with them.

We know these looking games, these mental exercises, are no substitute for real life. House-watching is like other pandemic hobbies in that way, whether birding or jogging or doing jigsaw puzzles – something to pass the time and maybe, we like to tell ourselves, provide a bit of a silver lining. (Hey, you always wanted to take up water colours anyway.)

It’s possible to get sick of silver linings, though. There is something just a little too poignant and transparently sad about looking at houses, in particular. It seems to come closer to filling the void many of us feel, while revealing just how yawning the void is.

I think it’s because, in the absence of human contact, houses can start to feel like companions themselves. You see them often, become familiar with their appearance, imagine you know their story. You have your regulars, your wild cards.

A pair of front windows and a veranda can even suggest a face. Maybe a drowsy giant, gazing out at the world – so human and present, it’s like they’re sitting on their own front porch. You want to wave. Though of course you don’t.

Opinion
The pandemic might turn us all into birders
May 2, 2020 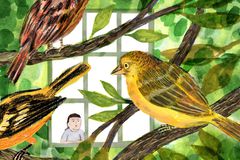