As Marc Mayer ascended to the stage set up in the National Gallery of Canada’s glass-and-granite Great Hall, he was fighting back tears.

Dozens of the gallery’s most influential donors had gathered to pay tribute to Mayer on Wednesday night, and, as he got to the mic, he evoked his childhood hockey hero for guidance on how to make a farewell speech.

“I was very encouraged by Wayne Gretzky. I remember watching him, the press conference where he left the Oilers, and he choked up quite a bit,” Mayer said. He would try not to cry too much, he said, “but I’m going to fail.”

Mayer, 62, finishes his second five-year term at the helm of the National Gallery in January. It’s a decade that has seen the Ottawa institution tackle major projects, from doing its part domestically to advance reconciliation with Indigenous people, to re-establishing Canadian art internationally through projects like the pavilion at the Venice Biennale.

The gallery has also faced its fair share of challenges – from budget pressures to the cancelled sale of a Marc Chagall painting.

As the head of Canada’s leading art institution, Mayer’s actions were always under a microscope. But he said the public outcry he sometimes received just comes with the job.

“For a lot of Canadians to be talking about art is always a good thing, no matter what it is they're saying,” Mayer told The Globe and Mail in an interview as guests cleared the Great Hall later that night.

The gallery’s foundation said $3-million was raised to mark Mayer’s departure. Two works were also donated in his honour: The Last of the Hurons (Zacharie Vincent), an 1838 portrait by Quebec painter Antoine Plamondon, and Parade, Party or Protest, a 2003 piece by British Columbia artist Geoffrey Farmer.

The guests at the dinner included major donors, such as Nova Scotia businessman Rob Sobey, Toronto art collector Ash Prakash and auctioneers David and Patsy Heffel, as well as other members of the national arts community, such as former governor-general Adrienne Clarkson and arts philanthropist Nancy McCain (along with her husband, Finance Minister Bill Morneau).

Michael Audain, a B.C. home builder, philanthropist and past chair of the National Gallery’s board of trustees, said in a tribute speech that it’s too early to assess Marc Mayer’s legacy, but that his love of the job always shone through.

“It is clear that he shares a passion for this country called Canada, which equals his passion for the visual arts,” Audain said.

Mayer said he hopes his greatest legacy will be the inclusion of more Indigenous art in the National Gallery. The permanent collection was reconfigured in 2017 – the 150th anniversary of Confederation – to showcase the history of Indigenous art alongside the traditional European narrative, and a quinquennial celebrating international Indigenous art was unveiled in 2013.

“What we don’t appreciate enough in Canada is the connection of these two completely different cultures – European culture and the Indigenous culture in this region we call Canada. That’s our cultural story,” he said.

Mayer’s final year, however, was overshadowed by one controversy: what he calls the Chagall-David affair.

In April, the National Gallery revealed it was selling Chagall’s The Eiffel Tower (1929) at a New York auction, to raise money to buy another painting that was later revealed to be Saint Jerome Hears the Trumpet of the Last Judgment (1779) by French painter Jacques-Louis David, owned by the parish of a Quebec City church. It was to be the largest sale in the National Gallery’s history. Instead, a pair of Quebec museums insisted they wanted to buy the David, the Quebec government intervened, and the deal was called off.

The Eiffel Tower, which had spent years languishing in the National Gallery’s vaults, was returned to Canada and put back on display. An anonymous donor (revealed by The Globe and Mail to be Audain) covered the large cancellation fee charged by Christie’s auction house.

In reflecting on the incident in an interview for the first time since the sale was cancelled, Mayer likened it to an earlier controversy: Voice of Fire.

That painting, a nearly-18-foot-tall canvas of two blue stripes and one red stripe, had been created by American abstract artist Barnett Newman for the ‘67 Expo in Montreal. Then-gallery director Shirley Thomson arranged to buy the painting for $1.8-million in 1990 and ignited a debate about whether such a seemingly simple design could be worth that much money.

Mayer says Thomson referred to the public debate around the piece as a “teaching moment.”

Mayer said a big lesson for him and the gallery during the Chagall sale was the fact that they felt their hands were tied: They couldn’t make the case to the Canadian public about why they wanted to get rid of the painting, while at the same time still making the picture sound attractive to potential buyers in New York.

“While it's for sale we can't really start denigrating it,” he said. “So that one we didn't really think through.”

Mayer’s last day at the gallery is Jan. 18. He said he’ll be moving to a farm he owns in New York State, and driving into Manhattan on weekends.

A successor to Mayer has not been named. A shortlist of candidates has been sent to the government, which has yet to sign off on the final appointment.

And the Chagall-David affair is not over. The Saint Jerome picture sought by the National Gallery now hangs on a wall in the Montreal Museum of Fine Arts, but its future ownership remains in dispute. A spokesperson for the Musée de la civilisation in Quebec City says that museum and the MMFA are still in talks to buy the painting from the Fabrique Notre-Dame de Québec. For now, the Quebec government will not allow the canvas to leave the province.

Opinion
The eye of the beholder: How we return art to its rightful place
December 3, 2018 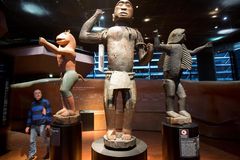 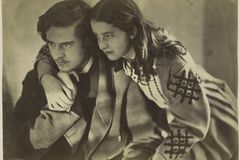 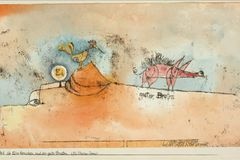