Visual art provokes so many responses. One that has struck me, encountering several exhibitions in Vancouver this month, has been the way art can un-numb us. How it can make us pay attention and contemplate things so familiar that they prompt almost no response. Water. Colours. Flowers. Norman Rockwell. Video games. (I have an 11-year-old son; these are very familiar.) Or they incite a visceral response completely tied to our past experience that goes unchecked as we go about our contemporary lives.

Rockwell’s work is ingrained in our visual vocabulary. I say Norman Rockwell, you see an image in your brain. What do those familiar folksy scenes with their humorous little captions awake in you? Is it nostalgia for a bygone age: for childhood visits to the doctor or an old-fashioned diner?

For all of his skill, Rockwell’s work has always struck me as a bit creepy – too whitewashed, sanitized, folksy American baloney. So it was with fascination and glee that I encountered Christopher Ando’s A Guiding Hand series at the Vancouver Art Gallery’s exhibition Transits and Returns. The show, co-curated by five Indigenous women, features work by 21 Indigenous artists from Canada, the United States, Australia and New Zealand.

It includes an installation of 36 works from A Guiding Hand. Ando, an Alutiiq, Hungarian and Norwegian artist based in California, cut up Rockwell prints and re-assembled them in new configurations – each new work a sort of cubist collage of the original. The meticulous process itself is a reference to practices of mapping and allotment that divide Indigenous territories – fragmented, nonsensical. The results highlight the sinister undertones of that nostalgia. Who is missing from Rockwell’s depiction of American life?

Each work retains its original title and two dates – Rockwell’s and Ando’s. In Missing the Dance (Jan 23, 1937), Sept. 4 2017 – Rockwell’s sad white girl in a blue robe in bed with a cold becomes a sea of white with a blue almost whale-like figure at the bottom, the girl’s face reconstructed as its tail. (The show runs until Feb. 23.)

A missing Indigenous narrative is also at the heart of the Western Front’s Regeneration: Breaking Time with Indigenous Video Games. For a few days, people are invited into the gallery to play video games created by Indigenous artists.

The show, guest curated by Toronto-born, B.C.-raised and Montreal-based Maize Longboat, serves as a public launch for his videogame Terra Nova. The two-player game is about a futuristic contact, in which an Indigenous elder, Terra, and a settler youth, Nova, need to work together.

“I feel like the game in a lot of ways is an embodiment of me and my identity,” says Longboat, 25, who is Mohawk from Six Nations in Ontario on his father’s side and French-Canadian on his mother’s side. He grew up playing video games, but did not see Indigenous people – himself, essentially – properly reflected in them. There is power in that exclusion.

Western Front’s media arts curator Allison Collins says a common thread in the games presented at Regeneration is a counter-narrative to those these artists may have grown up playing, such as Oregon Trail. Once considered an educational tool about the pioneer experience, it presented the navigation of the Oregon Trail from a settler viewpoint. At Regeneration, When Rivers Were Trails, is played from the perspective of an 1890s Anishinaabeg who is displaced from his land. The educational game, by Elizabeth LaPensée (Anishinaabe/Métis), Nichlas Emmons (Miami/Shawnee) and Weshoyot Alvitre (Tongva), can be seen as a corrective to Oregon Trail. I can’t wait to play it. (Show runs Oct. 19-22.)

In North Vancouver, B.C., at the Polygon Gallery, Egyptian artist Wael Shawky’s exhibition is built around his film Al Araba Al Madfuna III. The third of a trilogy, it is based on Mohamed Mustagab’s short story Sunflowers, where a community comes to believe that sunflowers are responsible for all sorts of healing – for everything from infant mortality to loneliness.

The work is filmed in negative – giving it a spooky, but beautiful, ambience – and shot in ancient Egyptian temples. Children are cast as adults, so we see a boy in a robe and almost comically fake moustache tell the story, but hear a man’s voice reading it in mellifluous, confident Arabic. (There are English subtitles.)

Shawky, who recently made The Guardian’s list of Best Art of the 21st Century, asks difficult questions: What do we choose to believe in, to worship? What value does that belief bestow upon the object? And can interventions stemming from that belief become dangerous to the natural order? (Show runs Oct. 18-Jan. 12; artist in attendance for opening night Oct. 17.)

Consider the interventions humans have imposed on water. Spill, a serendipitously timed show at the Morris and Helen Belkin Art Gallery at the University of British Columbia, examines human interventions on continental waters. The exhibition happened to coincide with last month’s climate strike; thousands of students have visited. From Oct. 16-23 the space is being animated with Spill: Response, a live component involving performance artists and educators.

Before seeing the show, I had no idea what an alluvial fan was, although I have seen countless such phenomena in nature. They are, simplistically, mountain-shaped deposits of silt created by flowing water interacting with the earth. B.C. artist Genevieve Robertson’s Alluvial Fan, 2019 is a sort of sculptural “painting” on paper, her paint being silt. She collected samples from reservoirs along the Columbia River, then ground them down to a very fine grain. In her silt-paint trickling down the sheets of white paper, you notice different shades and can see the glint of mineral deposits and organic material.

Robertson is concerned about the way silt is affected by damming projects and the environmental disruption and destruction this causes on coastlines. Everything is related. (Spill runs until Dec. 1.)

As with Spill and Al Araba Al Madfuna III, the central installation in Christina Mackie’s first solo show at Catriona Jeffries’s new East Vancouver gallery reminds us of the impact interventions have on the environment. Colour Drop feels as if it was made for this vast new space in a former industrial marine workshop. (It is in fact a 2014 work, originally installed in Chicago.)

Three large conical nets – two of them silk, one nylon – connected to the very high ceiling and walls by ropes, pulleys and weights, cascade down into tubs of dye. They have previously been lowered further down into the vats; we see evidence of that by their colours – a vibrant red, a deep yellow, a pale blue. They are inspired by plankton nets Mackie observed as a child; she grew up in Western Canada with her marine biologist parents.

The nets weigh only a few ounces, but are heavy with meaning. What’s there to begin with (a net) is changed by what it is exposed to; what we see has been filtered. The liquids in the vats crystalize as they dry; our perceptions solidify.

Every 30 minutes you can hear the sound work – Mackie’s first – installed in the courtyard. 2TRACKS was made using audio recordings of the train crossing next to Jeffries’s space. So you aren’t sure: Are you hearing the train or the artwork (which was, originally, the train)?

The outcome of that visit was to make me more aware of everything – sound, colour, material. I felt more present, a welcome pause from the crazy mind-race we all experience in our busy day-to-day. Visual art makes the world more meaningful, beautiful and still. I recommend it. (Christina Mackie is at Catriona Jeffries until Nov. 2.)

Opinion
Kathleen Bartels is finally ready to ‘pass the baton’ after 18 years at the VAG
October 11, 2019 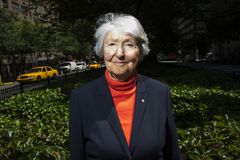 ‘I have no apology for genocide’: Artist AA Bronson reckons with his family’s history in latest work
October 7, 2019 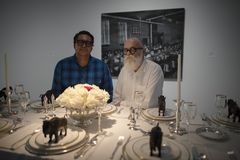