Two vividly rendered early 19th-century oil paintings of Mi'kmaqs hunting Canada geese were the big earners at a highly successful sale of Canadiana conducted on Wednesday afternoon in London by Christie's auctioneers. The paintings, by an anonymous artist in New Brunswick or Nova Scotia, were sold as one lot to an unidentified Canadian for just over $992,000, including buyer's premium. This was about 13 times the high-end estimate Christie's had affixed to the works before the sale.

The hunting scenes were among 325 lots consigned to Christie's by the estate of Peter Winkworth, a London-born, largely Canadian-raised collector who, before his death at 76 in 2005, accumulated thousands of artifacts related to Canada's colonial history, storing them in his Kensington mansion.

Before the sale, Christie's estimated the value of the lots at $1.7-million to $2.5-million (all dollars Canadian). By the time the almost six-hour sale concluded near dinner time in the U.K, the auctioneer was announcing it had sold nearly 95 per cent of the lots for almost $6.54-million, including premium. Christie's charges the successful bidder a commission of 25 per cent on the first £50,000 ($93,563) of the hammer price, 20 per cent on the next £950,000 ($1.8-million.)

A happy Nicholas Lambourn, Christie's head of topographical pictures, said he was "thrilled" with the results. "The sale almost tripled its top estimate with a string of great prices, setting a new benchmark for the best of the 19th-century Canadian art."

Unsurprisingly, many of the buyers were Canadians, most bidding on the telephone or online from Ontario and Quebec. That "nearly all of these great works are coming back to Canada [is] marvellous," said Brett Sherlock, managing director of Christie's Canadian operations. The new Canadian Museum of History in Gatineau, formerly the Canadian Museum of Civilization, announced it had successfully bid on 13 lots, spending nearly $355,000. Its single priciest buy, at almost $117,000, was a large pen-and-ink and watercolour tableau by Captain John Hewett depicting a winter-time meeting of military officers mid-way between Fredericton and Saint John circa 1824. The CMH also bought memorabilia related to General James Wolfe and the Franklin expedition, stereoscopic photographs, clocks and chairs, among other things.

The National Gallery of Canada – which in 2008 joined with Library and Archives Canada to buy an estimated 1,200 prints, sketches and paintings from the Winkworth Collection for $4.5-million – bid almost $410,000 to capture a William Raphael oil of Montreal's Bonsecours Market completed in 1880. Vigorous bidding pushed the painting's value well past both its $37,400-$56,100 estimate and the previous record for a Raphael sold at auction, $44,250, set last year.

Library and Archives confirmed late on Wednesday afternoon it had bought 10 lots, and would provide details on Thursday. LAC has perhaps the deepest familiarity and institutional history with Winkworth since in 2002 it received a special parliamentary appropriation of $6-million to buy some 3,300 prints, 700 watercolours, eight oil paintings and assorted ephemera from the collection. At the time, it was touted as the largest and most important acquisition in the archive's history.

At least one other public institution may have successfully participated in Wednesday's auction, but no confirmation was available late Wednesday.

Going into the sale, the lot with the single highest estimate ($112,200-$149,600) was an 1856 country scene by Cornelius Krieghoff titled Quebec Farm. The oil performed well, eventually going to an anonymous bidder for about $364,000, including buyer's premium.

Baring it all: Canada Council Art Bank’s collection of nudes on display
March 15, 2015 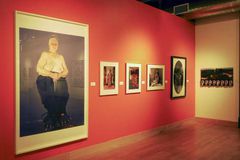