For a few years in high school, Janieta Eyre stopped speaking, from a combination of depression and shyness. That's when she learned that by being silent, you can also become invisible.

"It was a really interesting experience, because when you stop speaking, but you're still present, some people ignore you," says the English-born Toronto photographer. "It's like you're not there, but you are. You become part of the background, and you get to witness things without being called on to interact." But with nothing calling her to react, she also found that others' words and actions came to her from an increasing distance. Language fell away, and she began to think in images, and everything in her became still.

Eyre gradually recovered her speech, but never lost her feeling for being the unseen observer, which is the natural condition of being a photographer. She now speaks in a quiet voice that dissolves easily into giggles, and seems very different in conversation from the figures she presents in her many dramatic self-portraits. That's exactly the way she wants it. The woman visible in her photos, currently on view at the Katharine Mulherin Gallery and the University of Toronto Art Centre, is someone she says she doesn't recognize.

In many of Eyre's self-portraits, she is doubled, either as twins, or as a divided figure, with different clothes on either side of her body, and sometimes a line down the middle of her face. She's usually in a strange yet familiar domestic interior, staring at the camera, self-possessed yet ambiguous. She's both light and dark, domestic and alien.

"I'm very interested in the magic function of the camera, the way you can take something completely unreal and make it look like it really existed," she says. "When I first made a double image of myself, and was looking at the negative, I thought, 'Who is that?' I didn't recognize myself any more, and I realized I had found how I wanted to work. I want only those images in which I don't recognize myself."

Her several series of photographs since then have all been about "constructing an autobiography that is based on possibility, rather than reality," she says. Her imaginary identities propose a self that's fluid, not fixed. They are Eyre's answer to a favourite Buddhist koan: "Who were you and what did you look like before your parents were born?"

She realized she was shadowing Buddhist notions of the self only after she had completed a series called Incarnations, which includes a photo called The Day I Gave Birth to My Mother. It's a severe, strongly patterned twin image in black and white that looks like an old photograph from an imaginary past.

"The twin in art shows us that the self as we imagine it is not a separate, unique entity," Eyre says. "It only really exists in relationship to other people."

In 2001, Eyre became pregnant, and discovered another form of twinning, of two coming from one. She was seriously stricken with morning sickness. Some images in the Motherhood series that followed present the experience as a horror show of blood, alienation and the spectre of death. In one image, My Little Piglet, Eyre stands with rows of breasts exposed like the teats of a sow, near a pram with a piglet in a bonnet.

"People are often appalled by it," she says, referring to the series as a whole – or rather, to its presentation of some of the darker emotions that may attend pregnancy. But what they are seeing is not a conclusive statement about motherhood, but Eyre's way of confronting all sides of a physical and spiritual metamorphosis.

"When I do this kind of work, I feel a sense of peace when it's done," she says. "It's like when you meditate. You're watching a lot of difficult emotions and thoughts, and by sitting with them and incorporating them, you feel a sense of completeness."

Unlike some of her artist friends who have offspring, Eyre had no interest in getting her child involved in her work. "I thought if I did, she might grow up to resent me." But when her daughter turned 7, she demanded to know why she wasn't in any of her mother's photographs.

The result was In the Scream of Things (2007), a series of unsettling photos of a pretty little girl kneeling or sprawled on upholstered furniture, in fine clothes and odd attitudes, with eyes bruised or covered with buttons, and with butterflies or birds fluttering around her. This child of mystery seems at home in these interiors, but also like a visitor from another world.

The Mute Book, for which Eyre is still making images, came from a place most of us can recognize. "It was winter, I was feeling depressed, I didn't want to get out of my pyjamas," she says. "I thought it would be interesting to do a series of people half in their pyjamas and half in their clothes, with the half that goes out and is presentable and polite and apparently functioning, and the other half that isn't functioning, and is fed up and melancholy." She had seen an old circus photo years before, of a performer costumed half as man, half as woman. That seemed like a good guide, so she sewed together costumes of wildly different colours and patterns.

The title for the series came from Liber Mutus (Mute Book), a 17th-century pictorial alchemist's manual for the transformation of matter and the self. That's a fair summary of everything Eyre has tried to do, while making magic in the most realistic of media.

An exhibition of Janieta Eyre's work opens May 16 at Katharine Mulherin Gallery in Toronto. Janieta Eyre: Constructing Mythologies continues at the University of Toronto Art Centre through June 29, as part of the Scotiabank CONTACT Photography Festival. 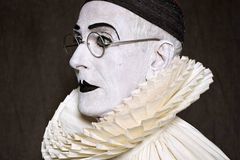 Finding lite in Darkness
July 19, 2006
'Chicks-only' art exhibit celebrates the breast
October 22, 2002
Follow Robert Everett-Green on Twitter @RobertEG_
Report an error Editorial code of conduct
Due to technical reasons, we have temporarily removed commenting from our articles. We hope to have this fixed soon. Thank you for your patience. If you are looking to give feedback on our new site, please send it along to feedback@globeandmail.com. If you want to write a letter to the editor, please forward to letters@globeandmail.com.
Comments